General Motors, one of the world’s biggest car companies, could make a comeback in Europe with a focus on electric cars.

GM left the European market in 2017 when it sold its Opel and Vauxhall brands to PSA for £1.15 billion, but the onset of full electrification could provide the American firm with a fresh opportunity in Europe, according to General Motors CEO, Mary Barra.

Speaking at the Milken Global Conference in Los Angeles, Barra said, “About five years ago, we sold our Opel business to what is now Stellantis and we have no seller’s remorse from an internal combustion business, but we are looking at the growth opportunity that we have now, because we can re-enter Europe as an all-EV player. I’m looking forward to that.”

Barra gave no indication of which GM brands might potentially be offered in Europe in the future, but did mention the popularity of the new all-electric GMC Hummer, with the firm taking in 70,000 pre-orders. 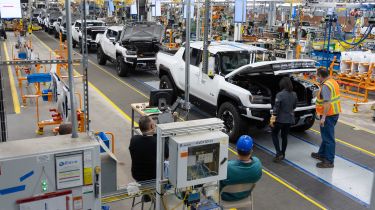 There’s potential for Cadillac, too, with the company already operating in Europe on a relatively small basis, selling only the XT4 compact crossover. The Lyriq SUV is currently the only fully-electric car in Cadillac’s global portfolio of models and would be the most likely to make its way over to Europe.

However, Barra also said “the specific conditions that are in Europe right now, we’re not facing,” referring to high petrol prices, parts shortages and the Ukraine-Russia war, which could all prove to be big obstacles.

GM has invested heavily in electric cars in recent years with the firm’s first full-EV assembly plant in Detroit, Michigan opening in 2021; GM also announced that it would invest $750 million in charging infrastructure in the US and Canada.

Find out more news and reviews on electric cars here