The brand claims it has focussed more on ‘preserving’ the character of the Phantom rather than changing it, with updates intended to keep the model at the forefront of its technologies and luxuries without seriously altering the look and feel of the car.

To that end, exterior styling updates are restrained. At the front, there’s a slightly redesigned nose, with a new chrome strip sitting atop the vertical struts of the car’s imposing front grille and aligning with the vertical daytime running elements of the headlights. The grille, like an increasing number of models in the BMW Group fold, now comes with an illumination feature too, lighting up the vertical elements at night.

Elsewhere, the Phantom’s exterior bodywork remains unchanged, and the model is still offered in both standard and extended wheelbases. However, new wheel options have arrived. A 3D milled stainless steel design is offered, and available with a fully or partially polished finish. More striking is a new retro ‘disc wheel’ design said to be inspired by the Rolls-Royce models of the 1920s, available with a polished steel finish or painted with a black lacquer.

Further exterior details have been added to the car’s list of extras, including the option of a darkened chrome grille surround, black bonnet reins, plus black window surrounds for the windscreen and the side windows. Rolls-Royce says these have been added due to customer demand for items like this. 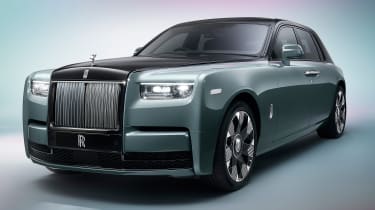 Inside, changes are few and far between. The steering wheel’s rim has been thickened to provide what the marque says is a better grip for drivers, which, by the brand’s own admission, are an increasing number of Phantom buyers, as opposed to those who prefer to be chauffeured. The same deep level of interior customisation will be offered.

Away from the styling updates, the brand has introduced a new feature accessed via the ‘Whispers’ private-members app for owners. Called Rolls-Royce Connected, it introduces key smartphone connectivity features, including the ability to send directions to the navigation system remotely, plus displaying the vehicle’s location and status.

To mark the arrival of the Series II version of the Mk8 Phantom, Rolls-Royce has revealed a one-off version called Phantom Platino, with a platinum metal-inspired makeover inside and out. Bespoke touches include a rear bench upholstered in fabric instead of leather, and the use of 3D printed ceramic trim.

The technical basis of the Phantom remains unchanged, using the same chassis and engine technology as before. Power is provided by a 6.75-litre twin-turbocharged V12 developing 563bhp, sending drive to the rear wheels via an eight-speed automatic transmission.

Now read our list of the Best luxury cars to buy…