The new Peugeot 208 majors in great design. It brings a sense of style that provides a real feelgood factor, helping it stand out in the crowded supermini market. Building on recent success stories in the shape of the 3008 SUV and 508 Fastback, Peugeot faced high expectations for its new small car, and on many levels it succeeded.

But, supermini customers are a demanding bunch. While the 208 certainly looks stunning and rides well enough, it offers a compromised package due to its mediocre passenger and luggage space and expensive optional kit. You’ll certainly pay for those good looks, as the 208 has a high list price when compared to some of its competitors.

Peugeot has some terrific small cars in its back catalogue, most notably the 205 which was a huge success across Europe in the 1980s and ‘90s. The company went off the boil a bit thereafter, and although it’s produced respectable numbers of subsequent cars, there’s been nothing that’s hit the spot in quite the same way. Part of the problem has been a lack of design flair, which Peugeot has done a lot to address in recent years.

The new focus on style really came to the fore in 2016 when Peugeot introduced the second-generation 3008 SUV, which effectively redefined its design language. Follow-up models have included the glamorous 508 fastback and the fashionable 2008 compact SUV, both of which have won plaudits for their style, upmarket feel and pleasant driving characteristics.

But it’s the supermini sector where Peugeot really had to get serious. It’s a core battleground for the French marque, and one of the toughest around with a range of excellent rivals that include the Ford Fiesta, VW Polo and resurgent Renault Clio. Peugeot knew it had a fight on its hands, and to its credit the latest 208 has the chops to take the fight to all of them.

Mixing with the best is one thing, but beating them is another, and it’s a big ask for Peugeot to return from the fight as a champion. Peugeot needed to ensure that comfort and refinement, decent driving dynamics, strong efficiency and plenty of technology were all present in the 208 if it truly wanted to shake up the supermini sector, and in many respects it has succeeded.

The 208, along with the new Vauxhall Corsa, sits on PSA Group’s new CMP small car platform. The platform has been designed from the outset to offer different powertrain configurations, so that means the 208 can come with a petrol engine, a diesel engine or as a pure-electric vehicle. Options for the 208 run to a 1.2-litre, three-cylinder turbocharged petrol with either 75bhp, 99bhp, or 128bhp, a 1.5-litre diesel with 99bhp or a 134bhp full-electric version.

Although the car is only available in a five-door bodystyle, Peugeot offers four trim-levels for the 208 range – Active Premium, Allure Premium, GT and GT Premium. All are available with petrol, diesel or all-electric powertrains, with the exception of the GT Premium that cannot be ordered in combination with the diesel unit. 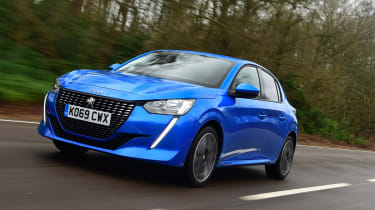 Allure used to get you climate control, LED rear lights, some gloss black exterior detailing and upgraded upholstery fabric, but it was discontinued in early 2022. Allure Premium builds on its specification with Peugeot’s 3D i-Cockpit configurable dash with a Head-Up Display, as well as a 180-degree reversing camera.

The competition is fierce in this sector and as well as the cars we’ve already mentioned, the likes of the Skoda Fabia, Hyundai i20, Kia Rio and Toyota Yaris should not be discounted. The Mazda 2 and Citroen C3, meanwhile, also provide an individual take on what makes a great supermini and will probably be considered by the kind of buyer who’s attracted by the 208’s sharp looks.

The timeline of the Peugeot 208 begins back in 2012, and covers two generations at the time of writing. Both models have affordable running costs to their name and prices have been kept in check by their popularity, although the 208 Mk2’s improvements over the Mk1 model in areas like interior quality and equipment make it a more desirable and therefore more expensive buy. It’s currently too early in the 208 Mk2’s lifecycle to ascertain its long-term durability, but there can be some reliability concerns with the Peugeot 208 Mk1.

Rather than naming its new-gen supermini the 209, Peugeot decided to instead do a second generation of 208. The similarities go beyond the name, too: like its predecessor, the 208 Mk2 has a distinctive design and a broad selection of engines – including an array of petrols, a frugal diesel and for the first time on the Peugeot 208, a fully electric option. Unlike the 208 Mk1, the Peugeot 208 Mk2 is only available as a five-door hatchback, and the second-gen 208’s more premium billing meant it was a bit more expensive than the first-gen model.

The Mk1 208 was a capable all-round supermini when new, and was a noticeable improvement over its predecessor, the Peugeot 207. Despite being shorter than the 207, the Peugeot 208 Mk1 was actually a bit roomier for passengers, and the car looked quite stylish inside and out. All Peugeot 208 Mk1s came with the more minimalist i-Cockpit dashboard design that debuted on this model, and most versions were well equipped, though bear in mind entry-level cars didn’t get a touchscreen display or Apple CarPlay and Android Auto smartphone connectivity. Read our full Mk1 Peugeot 208 buyer’s guide here…

For an alternative review of the Peugeot 208, visit our sister site carbuyer.co.uk…