Renault has opened reservations for the Megane E-Tech Electric – the all-new iteration of its family hatchback that adopts crossover styling cues and a pure electric powertrain.

In the UK, the new model will adopt a three-tiered range, comprising Equilibre, Techno and Launch Edition trims. Buyers can now join a priority list for their preferred version with a refundable £500 deposit.

All Megane E-Tech Electrics will be powered by a 60kWh battery in the UK, although a cheaper 40kWh variant will be offered in Europe. Standard equipment includes a 12.3-inch digital instrument panel and a 9-inch infotainment setup, which runs Android OS. Google services are integrated into the system, which also features Apple CarPlay and Android Auto. A variety of driver assistance systems, such as traffic sign recognition, lane keep assist and automatic emergency braking, also feature as standard.

Techno trim adds extra safety features such as adaptive cruise control, blind spot monitoring and a rear cross traffic alert. The styling is tweaked, too, with the addition of adaptive LED headlights that feature scrolling indicators and a distinctive running light signature.

Pricing will be announced in the coming weeks, and in the meantime, buyers can pay a £500 holding fee to secure a place in the queue to purchase the new model. Those who do so will be among the first to test drive the Megane E-Tech Electric when it arrives in the UK later this year, although customers can cancel their reservation at any time for a full refund.

Renault revealed the all-new fifth generation of its Megane family car at the 2021 Munich Motor Show as a new rival for other electric hatchbacks, such as the Volkswagen ID.3 and Nissan Leaf.

The Megane E-Tech Electric will be the first of Renault’s ‘Generation 2.0’ electric vehicles, and is based on the Renault-Nissan Alliance’s CMF-EV platform designed specifically for battery-powered models. The forthcoming EV will be fitted with 60kWh battery to provide a WLTP-certified range of 280 miles.

Rapid charging at a maximum 130kW DC allows a 15 to 80 per cent charge in 30 minutes, which will recoup up to 186 miles of range. As with Renault’s smaller Zoe model and its Chameleon charger, the Megane E-Tech Electric is also compatible with 7.4, 11 and 22kW AC charging.

Four regenerative braking levels also help to recoup charge when slowing down, forcing energy into the battery that would otherwise be wasted. These are adjusted using the car’s steering wheel-mounted paddles, with Level 0 providing no braking effect and Level 3 allowing one-pedal driving.

Although the CMF-EV platform does support a dual-motor all-wheel drive arrangement, the E-Tech Electric will come in front-wheel-drive form only; two electric motor options will be available, the first offering 128bhp and 250Nm of torque, while the second will serve up 215bhp and 300Nm of torque. 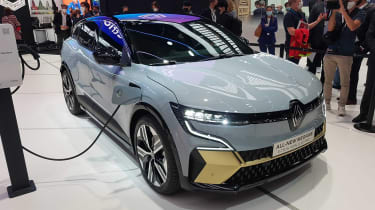 The latter will sprint from 0-62mph in 7.4 seconds and hit a top speed of 99mph, while there are Eco, Comfort and Sport driving modes available that alter the steering, accelerator pedal, interior lighting and display configurations. The Megane also offers a 900kg towing capacity.

Renault claims the Megane E-Tech Electric is also fun to drive, helped in part by its relatively low kerbweight for an EV. The big-battery car weighs from 1,624kg helped by extensive use of aluminium in the bodywork, while Renault claims that the new Megane is between 80 and 100kg lighter than its competitors spec-for-spec and is the lightest family-sized EV crossover on the market. Despite this, Renault promises strong refinement thanks to extra material in the doors and more foam in the floor to drown out noises you’d otherwise hear without a combustion engine to drown them out.

The E-Tech Electric’s relatively low kerbweight is helped by a compact electric motor that is 10 per cent lighter than that used on the Zoe EV supermini, as well as an innovative battery design that also benefits packaging.

At just 110mm deep the Megane E-Tech Electric’s liquid-cooled battery is the slimmest pack on the market and delivers 20 per more energy density than the cells used in the Zoe. This allows for a lower and fully flat floor inside the car, helping to keep the Megane’s overall height to just 1.5 metres.

With a 2.7-metre wheelbase (similar to its closest rival, the Volkswagen ID.3) and the wheels pushed as close to the car’s corners as possible, the Megane E-Tech Electric offers a good degree of space inside, as we found out at the car’s unveiling. Renault also targeted the combustion-engined Megane’s boot space, so there’s 440 litres on offer here (the lack of a rear motor helping improve luggage room). There is a significant boot lip, but a moveable boot floor is available, while there is a dedicated space for storing the car’s charging cables.

The rear screen is shallow, but to combat this (and for when the boot if fully loaded) Renault has developed a digital rear-view mirror to go with the all-round parking sensors.

It’s not the only advanced tech on board as the French firm has developed an all-new infotainment system for the Megane E-Tech Electric, called OpenR Link. It consists of a 12.3-inch digital dash panel and a portrait-orientated 12-inch touchscreen that both boast sharper and clearer graphics than any Renault infotainment system we’ve seen yet.

The new tech is powered by Android and uses Google Maps-based sat-nav, featuring an ‘Electric Route Planner’ that factors in charging stations on your route, offering easy integration for Android smartphone users and ‘Hey Google’ voice assistant control. OpenR Link is also compatible with Apple CarPlay and offers plenty of connected services in conjunction with the My Renault smartphone app.

Inside, the infotainment gives the Megane E-Tech Electric a relatively premium feel from our first impressions at the car’s launch, with many of the materials used either recycled or selected with an environmentally friendly focus, while the exterior styling matches this.

It still sits slightly higher from the road compared with a regular family hatch, giving the car a slight crossover stance, but the Megane’s design cues also help give it a muscular, compact look.

Sharp LED lights – including 3D tail-lights – that are animated on locking and unlocking give the E-Tech Electric a recognisable light signature, while alloy wheels ranging from 18 to 20 inches in diameter fill relatively muscular wheel arches. The overhangs are short and the bonnet is relatively stubby, helped by its compact motor and inverter packaging, which helps give good visibility too. The sleek profile is completed by new, flush-fitting door handles.

The car also features Renault’s new retro-inspired logo, which houses some of the sensors for the Advanced Driver Assistance Systems at the front. These include autonomous emergency braking with pedestrian and cyclist detection, while semi-autonomous cruise control with lane assist, lane keep assist and lane departure warning, a 3D around view monitor, AEB for when reversing, plus a passenger exit warning are all available.

What does the new Renault Megane E-Tech Electric have to beat? Check out our top 10 list of the best electric cars on sale…