The Ferrari SF90 Stradale is already one of the fastest and most powerful cars the famous supercar maker has built to date, and new spy shots suggest Ferrari’s current range-topper could be set for an update.

Much of the pictured test car looks unchanged, at least externally. However, camouflage covering the front of the car and the visible bodywork modifications suggest some important upgrades under the skin.

Perhaps the most obvious difference between this car and a stock Ferrari SF90 is the larger and raised air duct on the front bonnet. One reason for this could be the inclusion of something along the lines of the so-called S-Duct as found on the Ferrari 488 Pista supercar. This is a Formula One-derived technique of generating downforce, which works by channelling air through intakes in the front of the car and directing it out of vents in the bonnet.

The four rectangular slats in the car’s nose also suggest there are further aero updates going on with this lightly disguised Ferrari SF90. However, since they’re on the part of the car where the Ferrari badge normally goes, it’s likely these slats would be integrated more neatly into the car’s design, should it enter production. 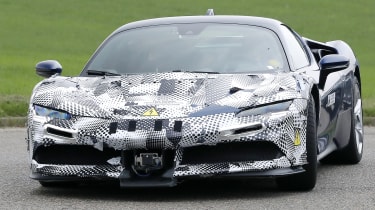 Conversely, the bodywork changes could be a clue there’s something different mechanically about this particular Ferrari SF90. Since the raised air duct is located almost directly above where the current car’s pair of front electric motors are located, it may suggest the SF90 test car boasts a new motor setup that requires more cooling to keep the temperatures under control.

That said, there’s also the chance this Ferrari SF90 isn’t a development mule for a faster variant at all. Instead, there’s a chance this could instead be a testbed for updated electronics tech to be used on the SF90 or other hybrid Ferraris. This could also be in tandem with other tech upgrades, such as an improved lithium-ion battery pack and a fleshing out of the Ferrari’s active safety assists.

Should this disguised development Ferrari SF90 be destined for production, at least a snippet of additional details could be revealed later in the year. Ferrari is set to host a Capital Markets Day meeting with investors on 16t June 2022, where it will disclose its long-term strategy and future product plans, which may also include a raft of updates for the SF90.