The new Allspace is Volkswagen’s attempt to leverage more from the Tiguan name, with – as the name would suggest – a greater focus on interior space. It’s longer than the standard model and is available with two extra seats.

A facelift in 2021 freshened up the exterior styling, while buyers will also benefit from extra interior kit and driver assistance technology. It’s a decent package, but the rearmost seats are really only for occasional use, and the Allspace is a little expensive to buy compared to some close rivals such as the Skoda Kodiaq.

Launched in 2007, the original Volkswagen Tiguan was a well-timed entry to the mid-size SUV party. The Tiguan hit the ground running, cementing itself as one of the world’s most popular cars in the segment.

UK sales began in February 2008, with the Tiguan soon becoming Volkswagen’s third best-selling car behind the Golf and Polo. It wasn’t particularly interesting to look at, but buyers grew to love its Golf-like usability, classy interior and SUV practicality.

By the time the new Tiguan arrived in 2016, a replacement was long overdue. The second-generation car is a significant upgrade on the original, with more interior space, improved technology, and segment-leading levels of refinement.

The Tiguan Allspace is 215mm longer than the standard car, with 109mm of that in the wheelbase. As a result, an Allspace in five-seat configuration offers a massive 760 litres of luggage space, a full 145 litres more than the regular Tiguan. Opt for the seven-seat version and this drops to 230 litres behind the rear-most seats, or 700 litres with the third row folded away.

Volkswagen claims the Allspace is designed for families who had previously relied on an MPV because of the space required, and pitches it between the standard Tiguan and the Touareg.

Front and four-wheel drive versions are available, with a full range of petrol and diesel engines. Rivals include the Skoda Kodiaq, SEAT Tarraco, Kia Sorento and Hyundai Santa Fe.

Well chosen cosmetic upgrades give it subtle new look over the standard car, while a generous level of standard kit and a quality cabin create the feeling of a premium product, edging it closer to the Touareg and away from the standard Tiguan.

If you’re used to the standard Tiguan, you probably won’t notice any difference with the Allspace. In either front or four-wheel drive guise, it’s comfortable and competent on the road, with a high driving position and great visibility.

If anything, we found that the longer-wheelbase contributed to a little more composure and stability when cornering compared to the standard Tiguan, while the adjustable suspension offers a noticeable difference between Comfort and Sport settings.

The 148bhp 2.0 TDI is available with a six-speed manual or an impressively smooth seven-speed DSG automatic transmission. This engine is slightly noisy when cold and at idle, but the Allspace keeps wind and tyre noise to a minimum once on the move.

The Allspace is offered with a choice of five petrol and diesel engines, with the entry-level 148bhp 2.0-litre turbodiesel having proved popular over recent years. It’s more than up to the task of carrying out school run duties and shopping trips, but a more powerful version would be better suited for longer trips, especially when carrying a full quota of seven people. That option does exist in the form of the 197bhp 2.0-litre TDI 4Motion model – capable of delivering a 0-62mph time of 7.8 seconds, which is almost two seconds quicker than the 148bhp variant.

Petrol power comes courtesy of 1.5-litre TSI unit with 148bhp, and a 2.0-litre TSI with either 187bhp or 242bhp. The only model in the Allspace range that cannot be specified with all-wheel-drive is the entry 148bhp petrol car.

Our experience suggests you should get close to Volkswagen’s claimed fuel economy figures in real world driving. During a test of the Allspace 148bhp 2.0-litre TDI Elegance (with four-wheel-drive and a DSG automatic gearbox), we managed 41.9mpg overall which is just shy of the company’s official WLTP-rated 42.8mpg figure.

Opting for a 148bhp oil-burner in Life trim with front-wheel-drive and a six-speed manual ‘box, means you should see overall economy of over 50mpg, while the petrol version in the same specification returns 41.5mpg on average.

It’s worth remembering that if you push the Allspace’s price up to or past £40,000 by specifying enough options or choosing one of the more upmarket engine/trim combinations, you’ll pay a road tax surcharge from years two to six of the car’s life. This probably won’t affect a Life-spec car, but the Elegance and R-Line are much closer to the £40k mark.

The Tiguan Allspace starts in insurance group 18 out of 50 for the entry-level 1.5-litre petrol model in Life specification. The 187bhp petrol in mid-spec Elegance trim is in group 28, while the diesels range from groups 21 to 29.

The standard Tiguan offers competitive residuals, although its high prices mean that in relative terms it will lose more money than its rivals. After three years and 36,000 miles of motoring you should expect to see around 50 per cent of the car’s original value retained. 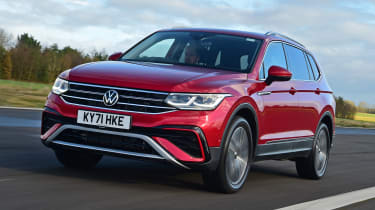 The Tiguan and Tiguan Allspace were developed at the same time, and if anything, the larger version is the better looking of the two. That it has a hint of the US-market VW Atlas about it should come as no surprise, as the Allspace was designed to appeal to our American cousins. In fact, US buyers don’t get the standard car – only the long-wheelbase version.

Volkswagen could have simply extended the length of the body and leave it at that, but instead it has worked hard to give it a personality of its own, enabling the Allspace to occupy the space between the Tiguan and the Touareg.

The changes are subtle, but effective, from the longer rear doors, to the higher bonnet, through to the tweaked side window line, individual radiator grille and chrome strip that stretches across the entire front end.

This front section can be ordered in on-road and off-road versions, with the latter including a special off-road package, which improves the approach angle by seven degrees. Roof rails come as standard, and a are complemented by structural lines which you won’t find on the regular Tiguan.

Inside, the Allspace offers few surprises, with a sense of quality and refinement that isn’t a given in this segment. In common with other Volkswagens, it’s a sombre affair, but there’s no doubting the high-end fit and finish.

The Tiguan’s infotainment system has distinct strengths and weaknesses. It scores points for its loading times, with the process of typing in a postcode via the on-screen keyboard and the system loading the first route instruction taking a rapid 12 seconds. However, the VW’s set-up isn’t all so rapid. The screen itself, for example, is more laggy in terms of touch response than we’d like.

While the Discover Media system isn’t the most up-to-date VW software (systems used by the latest Golf and the ID.3 are newer), in many ways this set-up is superior. The shortcut keys that flank the screen help the system feel more intuitive to use, and the menu layouts are more basic – but that makes them easier to understand.

The Tiguan Allspace works great as a five-seater, offering a huge boot and more space for rear seat passengers. The availability of a third row of seats will present a useful option, but these are best reserved for small children. Annoyingly, however, the third row seats do not feature Isofix points, limiting the types of child seats that can be placed in them.

Predictability, the Allspace is the same width as the standard Tiguan (2,099mm including door mirrors), with the standard-fit roof rails increasing the height to 1,674mm.

Thanks to the extended wheelbase, the Allspace offers an additional 54mm of knee room and 60mm more legroom for second row passengers, making it more of a genuine rival for the Kodiaq. Space in the third row is very poor, though, and adult passengers will have to sit with their knees around their ears.

The Allspace offers a decent 230 litres of luggage space when all the seats are occupied, while folding the rearmost seats unlocks a 700-litre boot capacity. With the second row of seats also folded away, you’ll benefit from a van-like 1,775 litres of storage.

The previous Volkswagen Tiguan was hardly a byword for reliability in our Driver Power surveys, and the current model finished in a disappointing 62nd position out of 75 cars. Volkswagen itself managed a middling 17th place out of 29 manufacturers in the Best brands poll.

Positive news is also to be found when turning to matters of safety: the standard Tiguan was awarded a maximum five-star safety rating by Euro NCAP (the result also covering the Allspace model), with an impressive 96 per cent for adult occupant protection. The other scores were 84 per cent for child safety, 72 per cent for pedestrian safety, and 68 per cent for safety assist technologies.

The Tiguan Allspace is covered by Volkswagen’s standard three-year/60,000-mile warranty. You can also choose to extend the manufacturer’s warranty to four years/75,000 miles, or five years/90,000 miles at extra cost.

Service intervals are flexible, but Volkswagen recommends that the Tiguan is serviced every 12 months or between 10,000 and 18,000 miles.