BMW is yet to unveil its all-new M2, but that hasn’t stopped the German firm from showing off some of the M Performance parts which will be available for the car.

In a new post on BMW M GmbH’s Instagram page, two images show a camouflaged M2 prototype wearing new components. Firstly, there’s a new rear wing, and secondly, a set of larger wheels which appear to be the forged ‘1000 M’ design currently available as part of BMW’s M Performance parts offering for the M3 and M4.

The caption reads: “The fine details of driving excellence, waiting to be revealed,” followed by several hashtags including “#MPerformanceParts”.

Earlier in 2022, the all-new BMW M2 was photographed from all angles at the famous Nurburgring circuit in Germany. As our spy pictures showed, a disguised version of the near production-ready high-performance flagship had been testing at the fearsome 12.9-mile long circuit.

Due to hit showrooms this year, just in time for BMW’s 50th anniversary of its M division, the new M2 is based on the recently launched 2 Series Coupe. Yet as our images show, the M2 gets an aggressive new look. Look past the camouflage of this prototype and it appears the new M2’s design is near-enough finalised. 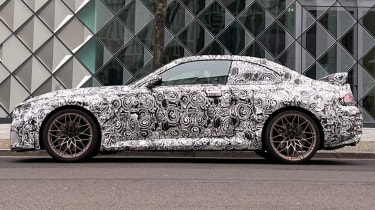 New Volkswagen Aero B spied ahead of 2023 launch

The upcoming Volkswagen Aero B has been spied testing once again, giving [..]

“Aston Martin desperately needs a clear direction for its future”

One in five UK cars has covered 100k miles or more

More than one in five cars registered in the UK has covered [..]

Volkswagen is planning to strengthen its footing in the US with the [..]

The Ferrari SF90 Stradale is already one of the fastest and most [..]

Renault has opened reservations for the Megane E-Tech Electric - the all-new [..]