Like the ID.4 GTX, this performance-trimmed ID.5 is lacking thrills. It isn’t too compromised in terms of practicality by its sportier shape, at least, but being only sold in ‘Max’ form, it’s expensive, and struggles to justify the price tag amidst some talented opposition.

From the sounds of it, there was a fair amount of internal debate as to what Volkswagen was to call its performance electric vehicles. The company’s product line spokesperson Martin Hube told us at the recent launch of the ID.5 that he argued strongly for the use of ‘GTI’, asserting that in such settings, the ‘I’ could mean ‘intelligence’.

In the end, the brand went another way, and the GTX performance EV sub-brand was born. And going by our drive in the Volkswagen ID.5 GTX, we’re glad it wasn’t labelled a ‘GTI’.

In the car’s press release, Volkswagen pitches GTX on the same level as the diesel GTD and plug-in hybrid GTE models, but in reality, it doesn’t even offer up the same levels of excitement found in those cars.

To create this derivative, Volkswagen adds a smaller front motor to complement the one used in the rear of the ID.5 Performance Pro, giving total outputs of 295bhp and 460Nm of torque. Those are healthy, Golf R-rivalling numbers, but the ID.5 with its 77kWh battery pack is not a light vehicle, tipping the scales at over 2.2 tonnes.

As such, the 0-62mph time is perhaps more modest than you’d expect at 6.3 seconds, similar to what a Golf GTI offers. A super-fast torque delivery means it initially feels quite brisk before a very linear feeling of acceleration takes over. Also, while technically capable of delivering instant torque, the motors ease in more gently than in some performance EVs when you apply the throttle, with the response sharpened up in Sport mode.

Engaging this also firms up the standard-fit adaptive dampers, compromising the smooth ride slightly while cutting body roll. The important word here is ‘slightly’ – the bandwidth of the system is fairly limited.

Meanwhile, Sport mode increases the steering resistance, but this merely highlights the overly springy nature of the setup, which has a strong self-centring attitude. The inclusion of a variable ratio rack is welcome, however, making the ID.5 more manoeuvrable through tighter corners. 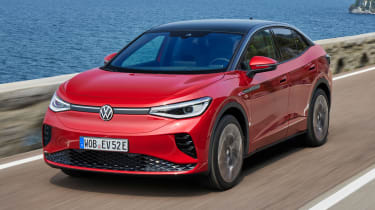 In such bends, the low-slung battery pack in Volkswagen’s MEB platform means the ID.5 is relatively good at hiding its weight, but the front end does push on into understeer earlier than we’d like. This can be rectified with more throttle, giving some degree of movement at the rear axle thanks to the motor back there being more powerful than the unit up front.

Ultimately, though, the ID.5 GTX doesn’t feel hugely comfortable during dynamic driving. Much like the ID.4 GTX and the related Skoda Enyaq vRS, it’s better suited to being driven at a more relaxed pace, which calls into question the point of having all the extra power and paying for the premium over the 201bhp Pro Performance model.

The chassis is broadly the same across both derivatives, and despite the ID.5’s more sporting ‘coupe’ stance, it hasn’t been set up any differently from the ID.4.

Speaking of the new body, the ID.5 looks much the same as the ID.4 when viewed from the front or just off to the side, starting to deviate from the B-pillar backwards with a sloping roofline leading to a new tailgate with an integrated wing.

Those preferring the styling of the ID.5 won’t have to compromise too much in terms of practicality. Rear headroom is reduced by 12mm, but there’s still more on offer here than in a Ford Mustang Mach-E, meaning even taller adults can sit in the back comfortably. Boot space is actually a touch larger than the ID.4’s at 549 litres, although the total space on offer with the rear seats down has dropped by a significant 173 litres to 1,561.

What might be more off-putting is the price. Unlike the ID.4 GTX, which is available in standard and specced-out ‘Max’ guises, the ID.5 can only be purchased in the latter form. This means the only ID.5 GTX on the menu is an eye-watering £58,640. This is a lot of money considering the ID.5 has some surprisingly cheap-feeling materials inside, and an abundance of needlessly fiddly controls.

Admittedly, the premium over an ID.4 GTX Max is relatively modest at  £1,370, and the car includes a want-for-nothing spec list including a panoramic sunroof and an energy-saving heat pump for the climate control system. If you don’t want all of the ‘Max’ extras, however, that purchase price will be a tough pill to swallow.

The GTX Max, then, is best avoided in favour of the ID.5 Pro Performance, whose pace will be more than adequate for most. For anyone wanting more go, a Mustang Mach-E will be more enjoyable to drive, while a Kia EV6 AWD is faster and better polished.

The new Allspace is Volkswagen’s attempt to leverage more from the Tiguan [..]

Our Citroen is ticking most boxes. Its quirky styling divides opinion, but [..]

The SUV market moves quickly and it’s a testament to the Skoda [..]

The Volkswagen ID.5 inherits both the ID.4’s good and not-so-good aspects, resulting [..]

Peugeot’s all-new 308 feels even more like a premium product, in keeping [..]

The last and final version of the V12 Vantage looks amazing and [..]

The Suzuki Jimny remains a niche player in a market dominated by [..]

The Jeep Wrangler is a four-wheel drive icon that’s better than ever [..]