The SUV market moves quickly and it’s a testament to the Skoda Karoq that with only small tweaks it can still challenge the best in its class. The range of engines is as strong as ever but the lack of a hybrid option is a little disappointing considering most of its rivals have mild-hybrid or plug-in hybrid versions.

The Skoda Karoq burst onto the SUV scene in 2017 and quickly laid out its dominance of the segment. It won our Mid-Size SUV of the Year for 2018 as well as multiple group test review wins against the Nissan Qashqai, Renault Kadjar, Peugeot 3008, Vauxhall Grandland X and plenty of others.

It’s understandable then that Skoda hasn’t tweaked the Karoq formula too much in this mid-life facelift.

There are some subtle cosmetic tweaks on the outside, such as new LED matrix headlights and rear light design more in line with the larger Kodiaq SUV, a wider grille and reprofiled bumpers. On this model we also have the optional £1,045 Velvet Red metallic paint. This mid-spec SE L model also offers 18-inch Miran alloy wheels, chrome roof rails and an extended rear spoiler as standard to set it apart visually from the base-spec SE.

The inside of the original Karoq felt as upmarket as any of its rivals and even the Tiguan from parent company Volkswagen. Build quality was another strong point and it was well equipped in all trims – and it’s a similar story with this new facelift. The layout is essentially the same as before but the SE L now receives a heated steering wheel and microsuede leather. There’s a various mix of plastic in the cabin but it all feels well screwed together.

While the basic SE isn’t exactly lacking for tech, the SE L gets a rear view camera, front and rear parking sensors, keyless entry on top of an eight-inch central touchscreen with Apple CarPlay and Android Auto connectivity. Our car didn’t have the £1,400 ‘Columbus Package’ optional extra that adds a 9.2-inch touchscreen with Skoda’s virtual cockpit and wireless charging.

As we’ve come to expect from Skoda, there are plenty of thoughtful touches such as part of the firm’s ‘Simply Clever’ tagline. Gadgets include an ice scraper, an umbrella under the passenger seat, foldout tables for rear passengers, storage nets, a clip-on waste bin and a handy jumbo box with reversible cup holders in the centre console.

One of the reasons the Karoq has taken so many group test wins is thanks to its practicality. The 521-litre boot (with the seats up) might be smaller than the Ford Kuga’s 526 litres, but it’s bigger than those in the new Alfa Romeo Tonale, Vauxhall Grandland X, Peugeot 3008 and even its close sibling, the SEAT Ateca. Put the seats down and you’ll get a rather capacious 1,810 load area.

The Karoq comes with five engine choices: two petrol and three diesels. The 1.5-litre TSI four-cylinder unit we’re testing here is the most powerful petrol model you can buy, with 148bhp and 250Nm of torque.

It’s a decent step up in power from the entry-level 108bhp 1.0-litre three-cylinder petrol but it feels quite similar to that powertrain in its delivery. The 8.8 second 0-62mph time is sprightly enough and the in-gear acceleration is more than adequate for a family SUV.

The small turbocharger kicks in nice and early so there’s enough power low down in the revs to save you from having to work the six-speed manual gearbox hard. There’s also a DSG automatic transmission but we’d recommend you save yourself £1,505 because the manual itself is no chore to use.

While we’ve driven more refined four-cylinder petrols, the suppression of wind and road noise even on these larger 18-inch wheels is good in the Karoq and it just adds to the overall feel of solid build quality.

The 1.5-litre four-cylinder model actually sits in the same CO2 tax band as the three-cylinder version and Skoda claims a decent fuel economy of 43.2mpg, so it shouldn’t cost too much to run.

Sitting on the tried-and-tested MQB platform, this updated Karoq doesn’t feel any different to the original model but that’s no bad thing. Higher-spec models can get adaptive dampers but the standard suspension does an excellent job of absorbing road imperfections.

Although the Karoq feels agile enough and there’s a surprisingly little amount of body roll in the corners, the soft ride partnered with fairly vague steering makes the Karoq feel much more at home when you’re driving it gently.

Skoda offers some keen finance deals for the Karoq. This mid-level SE L is available on a 48-month deal with a £10,000 deposit for £362 per month. A similarly specced SEAT Ateca with the same 148bhp engine will cost £375 per month and the Vauxhall Grandland X will cost £396 per month. 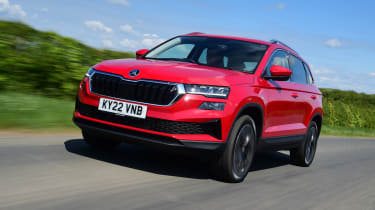