The last and final version of the V12 Vantage looks amazing and has huge power and performance to match. But a more focused personality doesn’t entirely suit it overall, while the ride is simply too stiff for the public road. Not that we won’t miss it desperately when it’s gone.

According to Aston Martin’s now former boss, Tobias Moers, the man who oversaw the development of this new V12 Vantage, the new 200mph super coupe is “the fastest, most powerful and most dynamically capable V12 Vantage ever.” It is also “an embodiment of Aston Martin’s intensifying focus on driving dynamics, which ensures it will go out on the highest of highs.”

It’s hard to know who or what exudes more confidence: the car itself – which looks incredible in the flesh – or the rhetoric behind, and with the man responsible for both no longer installed at Gaydon, I guess we’ll never know. Either way, the 690bhp, £285,000, twin-turbo V12 Vantage is one heck of a last hurrah for Aston Martin’s most cherished 12-cylinder sports car.

Beneath its dramatic new lightweight carbon-composite skin, the V12 Vantage has embarked upon a serious exercise regime to help preen its kerb weight to “just” 1,795kg. Its bodyshell also boasts new strut braces front and rear that help to stiffen it by almost 10 per cent compared with the standard Vantage, while its suspension is some 50 per cent stiffer at the back and 40 per cent firmer at the front.

Behind each of its monstrous 21-inch cast alloy wheels sits a huge carbon-ceramic brake disc, and there are (optional) new carbon fibre wings, skirts and spoilers all round that help it generate 205kg of downforce above 150mph, says Aston. The tyres are by Michelin but are not Cup 2s, as you might expect given its new-found focus, but are instead Pilot Sport 4s, hinting at an extra intended dose of usability.

As you’d also expect, the performance is chest-thumpingly impressive, with Aston Martin claiming 0-62mph in just 3.5 seconds, 0-100mph in less than seven seconds and a top speed of exactly 200mph. Don’t ask about the combined fuel economy figure because there isn’t one, although we registered a test average of 14.2mpg over 500 miles. Emissions are rated at 315g/km, but given that there will be just 333 examples made over the next few years, all of which are already sold, the V12 Vantage isn’t going to put that big a dent in our planet’s future.

Rivals? Think Ferrari 812 Superfast at one end of the scale, or Porsche 911 GT3 at the other, with cars like the no-longer-on-sale Mercedes AMG GT R and BMW’s M6 Competition also appearing on the radar, albeit at a distance.

In theory the V12 Vantage has few genuine rivals to speak of however, because on paper it should offer a broader repertoire than any of its competitors, being a full-blown GT car on the one hand, and a supremely focused track monster on the other.

In reality, though, it doesn’t quite turn out that way. How so? Because although it’s undeniably lovely to look at and is rippling with potential on paper, in practice the V12 Vantage isn’t quite the rule-bender we expected, and wanted, it to be. 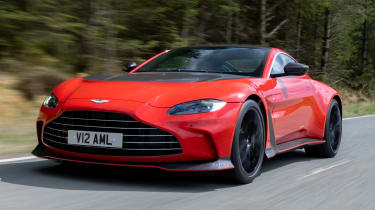 It’s extremely quick in a straight line, no question about that, the 5.2-litre twin-turbo V12 delivering a huge hit of all-but lag-free acceleration in any of the first five gears when there’s more than 2,500rpm showing.

It gets stronger at the top, true, and although its mid-range isn’t just as bombastic as you might expect with 690bhp and 753Nm under your right foot, in outright terms no one is ever going to complain about the way this car goes. In this specific respect it’s an absolute monster, and nothing less.

It’s the other stuff it does on the move that’s less impressive, and which is the cause of a fair amount of confusion. Such as the way it rides, steers, sounds and changes gear, all of which are memorable but not necessarily for the right reasons.

The ride comfort is especially baffling, because although there are three different settings for the drivetrain and dampers – Sport, Sport+ and Track – the V12 Vantage never feels calm or comfortable in any of its modes. Instead, it’s either very firm, downright hard or – on the public road at least – almost unbearably stiff. As such, it also generates a ludicrous amount of tyre noise on UK roads, plus its steering is both heavier and less delicate than we’ve come to expect from the best Astons.

The sound it fails to make is also a touch disappointing, all things considered. For a regular GT car, the V12’s machinations would be entirely pleasant, if never exactly ear-shattering. But for a limited edition, last and final hurrah version of the mighty V12 Vantage, it is oddly unamazing to listen to, even when it’s in Track mode.

The gearchange is also not class leading – nothing like – despite the software of the eight-speed gearbox having been tweaked to make it more responsive in Drive. Shift manually using the paddles and the responses and shift speeds are OK but nothing more, whereas in rivals such as the Ferrari 812 and Porsche 911 GT3 the gearchanges are events to savour, to be amazed by.

The brakes, on the other hand, are superb, the V12 Vantage stopping as powerfully and with as much feel as any rival, and the competitors at this rarefied level are very good indeed in this respect.

As for the cabin, it’s mostly business as usual inside the V12, in that it’s the same as any other Vantage fundamentally (nothing wrong with that) except for a V12 badge at the base of the centre console and a pair of optional new lightweight carbon fibre bucket seats.

These were fitted to the test car, cost a not-very-small fortune and are probably best avoided unless you’re going to spend a lot of time on the track in your V12 Vantage. Where, by the way, it feels quantifiably more at home than it does on the road, purely because its stiff ride and crazed suspension aren’t anywhere near as much of an issue.

Conclusion: in some ways this last V12 Vantage is an incredible car that will, inevitably, hit the spot perfectly with its intended audience. But we can’t help thinking that Aston has gone too far with the ride and suspension this time, and that the car’s overall appeal has suffered as a result. To be brutally honest, this is not the best version of the V12 Vantage there has ever been, although we will still miss it very much when it is gone.