The Bentley Bentayga has been a smash hit for the British brand – and now the plush SUV is getting an even more luxurious long-wheelbase version, as an indirect successor to the recently departed Mulsanne limousine.

The result of a nine-figure investment by Bentley, the new Bentayga Extended Wheelbase has a wheelbase stretched by 180mm over that of the regular model. It’s designed, the manufacturer claims, to deliver the best seating experience of any of its vehicles, and all of the stretch goes into the rear door and the rear cabin. The overall length is 5,322mm, making this Bentayga almost 30cm longer than the latest Range Rover, and boot capacities range from 380 litres to 484 litres, depending on the seating.

Indeed, while the EWB drops the regular Bentayga’s seven-seat option, there are still three possible layouts – four seats, five seats and, as standard, a new ‘4+1’ configuration that brings two distinct outer rear seats, and what the firm calls an “occasional middle seat” that is big enough for a third adult. The new longer doors – part of an overhaul that also brings bare-shell changes to the underfloor, side panels and roof – can be operated electrically, in another first for the Bentayga model line.

Key interior features include Bentley’s Airline Seat – which offers 22 ways of adjustment and monitors the occupant’s temperature and surface humidity, then adjusting the heating and ventilation automatically to improve comfort. The seat position has several modes, including Relax, where the front passenger seat is moved forward to maximise space for the rear occupant and a footrest is deployed.

The seats also have a postural adjustment function that can provide up to 177 changes every three hours. The system uses air pockets in the seat, and Bentley claims these offer scope for more subtle and sophisticated manipulation than conventional massage motors. There are also new trims and materials – most notably what Bentley calls Diamond Illumination, in which light is emitted through tiny perforations in the soft door trim. 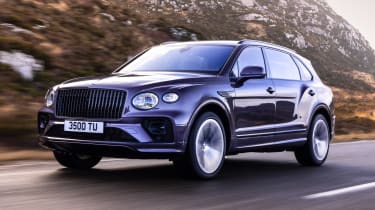 The Bentayga Extended Wheelbase is being launched with the proven twin-turbocharged V8 petrol engine, producing 542bhp and 770Nm of torque – enough, Bentley claims, for a 0-60mph time of 4.5 seconds and a top speed of 180mph. There is no engineering reason, we’re told, why the regular car’s plug-in hybrid powertrain cannot be accommodated in the longer model – so expect it to be added to the range in due course.

The Extended Wheelbase is the first Bentayga to get four-wheel steering; designed to improve the car’s manoeuvrability and high-speed stability, it actually delivers a turning circle that is seven per cent tighter than a regular Bentayga’s, at 11.8 metres.

Bentley claims that the Bentayga Extended Wheelbase has the highest level of personalisation ever offered on the model, with up to 24 billion possible combinations of trim, colours and materials, and a total number of possible specifications (including mechanical features) that runs into trillions.

No prices have been announced, but expect a premium of around 15 per cent over the conventional Bentayga, and it will be possible to spec the Extended Wheelbase to a figure north of £300,000. The car will go on sale globally by the final quarter of this year, and Bentley anticipates that the new model – which it hopes will straddle the luxury SUV and limousine segments – could account for up to 45 per cent of all Bentayga sales.