Our Citroen is ticking most boxes. Its quirky styling divides opinion, but it’s comfy and spacious. The sliding doors are hard to close and we have a few quality issues, with trim coming away. We would also like a little more range.

I won’t lie: it’s taken me a while to get to grips with my first fully electric car. I’ve had the usual issues – cold weather affecting the range, and the resulting anxiety – but wouldn’t you know? It turns out the main problem has been me.

When our Citroen e-Berlingo arrived back in February, it seemed the perfect vehicle for the situation I found myself in. My son George required regular hospital visits while he was recovering from a car accident, meaning he needed easy access to the car, and room for his crutches and wheelchair, plus ideally a smooth ride.

Sure enough, the Citroen is spacious and great around town, quietly using very little charge thanks to my preference of using the Brake setting, which claws back electric charge whenever your foot comes off the accelerator. With some practice you hardly need to brake at all – so getting George back and forth to his appointments has been a breeze and relatively inexpensive.

However, while I can’t deny the space in the back of the e-Berlingo has been fantastic, the Citroen’s accessibility isn’t that great. The sliding doors are heavy, and even I find them tough to move at times. George has wrist injuries and can’t move them from inside the car at all, and his pregnant girlfriend Lucie also struggles.

So I end up acting like a taxi driver, letting my passengers in, then sliding the doors shut from outside (with some force, it must be said) to ensure they close, before finally getting into the car myself.

Another thing we watch out for is the vast tailgate, which needs to be considered when parking. The superb rear-view camera helps, but it’s not always easy on tree-lined streets.

Day to day around town, I drive the Citroen in Normal mode, which means it’s responsive without feeling fast, and the heater chucks out some warmth. For longer journeys I use Eco mode, which increases the range readout at the cost of acceleration and heat, because the car limits both.

The car’s biggest challenge came in March, when my wife and I set off to Yorkshire for a week’s holiday. With the claimed range of 180 miles, I was a bit nervous; I’ve only ever managed a reading of 171 miles in Eco mode (after a full charge) and it can dip quickly.

But as it turned out, it was my nerves that were to be the main problem on our trip. We made it through London on to the M11 northbound using hardly any charge at all. I’d insisted on running in Eco mode until I had an idea how much power we were using and how near we would get to one of the three motorway fast chargepoints that I’d identified in advance. So my wife sat with her coat on to avoid the chill while I drove along at around 60-65mph to preserve charge. Rock n’ roll motoring!

I did find the cruise control and head-up display helpful, and the sat-nav was clear and simple. But traffic was unkind to us and severe delays added hours to the trip. We stopped three times on the way up.

On the first occasion we waited 30 minutes to get onto a charger (Ionity); the second time, both (Gridserve) chargers were full, so we moved on, but had to take a 30-minute diversion to Lincoln to charge (Instavolt). We were so late and irritated by this point that we just stopped at a family member’s house en route and lost a day at our Scarborough accommodation.

The sensible thing to do would have been to charge overnight, but the Citroen doesn’t come with a three-pin charging cable, so it took a further failed attempt at Louth, then a successful Instavolt charge at Humberstone to finally get us to our destination.

Once we were in Yorkshire, we carried on using Ionity and Instavolt chargers because they worked, but with the latter being sited at McDonald’s restaurants, we must have eaten up any fuel savings in food costs. Note to self: remember to take a packed lunch and a flask next time!

With hindsight, I just didn’t trust the e-Berlingo or its displayed range at first. I stopped too often on the way up, wasting time rather than optimising my range by picking a chargepoint and trusting that we would make it with 15-20 miles left. It only clicked on the way home, but by then I’d spent over six hours charging the car.

However, driving an EV in Yorkshire in March on Eco mode is a slow, cold, joyless experience. This is not a criticism aimed at the Citroen, though; at one chargepoint I spoke with a Porsche owner who’d spent two hours the night before researching his route. The reason, he confessed, was that his car’s claimed range dropped by up to a third if he heated it and drove it like a Porsche.

Fleet cars can come thick and fast at Auto Express. I have just given back the keys to our excellent Toyota RAV4 PHEV, but had to wait a week for its replacement – a brand-new all-electric Citroen e-Berlingo – so I was lucky enough to get a bonus week at the wheel of a new C4 to fill the gap.

This pseudo-SUV crossover is smaller than the RAV4, of course, but any fears I had about downsizing were soon washed away by the Citroen’s mix of cool styling and gadgets. Both of my sons loved the interior comfort and styling, and they were quick to hook up their iPads via the case and attachment mount, both of which slideout from the dash above the glovebox.

The heated massage seats (£150) were also a big hit. But whereas my boys liked the options, I was more impressed by the level of standard kit in this C4.

With Shine Plus trim you get a driver safety pack, featuring alerts, lane-departure warning, traffic and sign recognition, and adaptive cruise control. The reversing camera with top-down vision was another impressive feature, along with the wireless phone-charging slot. Most noticeable was the head-up display, with simple graphics illustrating the cruise control and limiter settings, plus a clear speed readout. It even shows the speed limit on a clear sign, which flashes red if you get a bit heavy-footed.

Citroen’s infotainment system has been criticised in the past, yet I have to say that I found it relatively straightforward.  I didn’t do too many miles in the C4, but I liked it. This car showcases Citroen’s focus on comfort, and although the relatively soft suspension does mean a bit of body roll, it’s a small price to pay for the way the car soaks up urban speed bumps and potholes.

We also found the car practical. I needed to collect a bass speaker and two amplifiers from storage for my eldest son, George. The speaker was big and heavy, but fitted (just), although the high boot lip was a challenge.

After just a week, the two sets of Citroen keys were swapped and I grabbed a quick snap of the cars together before the caramel-brown C4 disappeared. 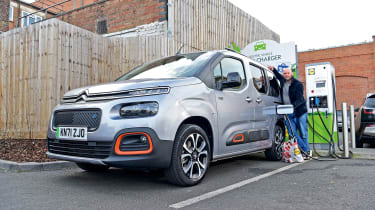 My first impression of the e-Berlingo is that it looks quite cool, in a very functional sort of way. The orange details and exterior mouldings help it look more car than van.

The boot space is vast, with up to 2,107 litres. That’s ideal for my current situation, with a son who’s recovering from a car accident and still needs a wheelchair on occasion, plus a grandson with a big buggy.

However, the e-Berlingo is noticeably less well equipped than the C4. It’s been a long time since I’ve driven a test car that I’ve had to turn a key to start, but that’s just a button-pushing habit I’ve developed.

The first trip in my new car was a simple dad-taxi run. Around town the e-Berlingo used very little charge, especially in Brake mode which, with practice, should reduce the need for me to press the brake pedal and send more power back to the battery.

I need to work on my motorway technique, though, because an 80-mile round trip ate up 100 miles of the claimed 180-mile range. True, it was cold and windy, but that’s Britain in winter, and the first two full charges of the car have only delivered up to 164 miles of range. Roll on summer.

The new Allspace is Volkswagen’s attempt to leverage more from the Tiguan [..]

The SUV market moves quickly and it’s a testament to the Skoda [..]

Like the ID.4 GTX, this performance-trimmed ID.5 is lacking thrills. It isn’t [..]

The Volkswagen ID.5 inherits both the ID.4’s good and not-so-good aspects, resulting [..]

Peugeot’s all-new 308 feels even more like a premium product, in keeping [..]

The last and final version of the V12 Vantage looks amazing and [..]

The Suzuki Jimny remains a niche player in a market dominated by [..]

The Jeep Wrangler is a four-wheel drive icon that’s better than ever [..]