In theory the Golf SV is more desirable than the hatch that sired it, but this mini-MPV never captured the imagination of buyers. Perhaps it’s because the SV (Sports Van) name was perceived as being derived from a commercial vehicle rather than one of the world’s best family cars. But don’t let that put you off. As with the Golf hatchback, the SV comes with some great engines and transmissions, tough build quality and decent equipment levels, especially if you buy an SE or above. While the Golf SV won’t set your heart racing, it should be painless to own in terms of reliability as well as running costs. But finding your perfect example might be harder than you think, because there aren’t large numbers of Golf SVs to choose from on the second-hand market.

The Volkswagen Golf has become an institution since it first appeared in 1974. Almost half a century on, this perennially popular family car is still in production, in Mk8 form, and is as desirable as ever.

It’s been offered as a hatchback, estate and a convertible over the years, and VW introduced a high-roof mini-MPV version in 2005, called the Golf Plus. Although this offered more practicality than the regular Golf hatch, sales figures were modest, but that didn’t stop the brand from introducing a sequel in the form of the Golf SV (Sports Van), which also didn’t sell in big numbers.

Don’t be put off by this, though, because in many ways the Golf SV is every bit as good as the regular Golf, and more so if you need extra usability and versatility.

Picking up where the Golf Plus left off, the Golf SV arrived in July 2014 as a five-door hatchback with five seats; anyone wanting to accommodate seven people had to buy a VW Touran instead. Golf SV buyers could choose between two petrol engines: a 1.2 TSI with either 84bhp or 109bhp, or a 1.4 TSI unit with 124bhp or 148bhp.

Diesel fans could opt for a 1.6 TDI engine with 89bhp or 109bhp; at the top of the range was a 148bhp 2.0 TDI unit. Things ticked over for the next three years, but then in autumn 2017 Volkswagen announced a facelifted Golf SV, with revised styling, new colours and extra driver-assistance systems, such as trailer assist and traffic jam assist.

By this point the 1.2 TSI petrol engine had been replaced by a 1.0 TSI unit that offered either 84bhp or 109bhp.

We’d avoid any Golf SV with an entry-level engine (84bhp 1.2 TSI, 89bhp 1.6 TDI), because you’ll want more muscle than this. Other than that, it’s a question of choosing what fits best with your budget.

The DSG automatic transmission works brilliantly but increases fuel consumption, and manual gearboxes tend to be more reliable. Kit levels varied, so we’ll focus on the summer 2017 specification because this was mid-way through production.

At this point, the entry-level S trim has a 6.5-inch touchscreen, DAB radio, Bluetooth, electric windows all round, plus electrically heated and adjustable door mirrors. The SE adds 16-inch alloys, automatic headlights and wipers, plus adaptive cruise control. The GT has sports seats, sat-nav, front and rear parking sensors and 17-inch rims.

The Golf SV’s closest rival is the VW Touran. This is an even more practical seven-seater hatch, with the same engines, gearboxes, build quality and ergonomics as the Golf.

More readily available is the Ford C-Max (and seven-seat Grand C-Max), which is great to drive and excellent value, while the Vauxhall Zafira Tourer is also plentiful and offers a lot of car for the money. The Renault Scenic and (seven-seater) Grand Scenic are stylish, well equipped and good value, as are the Citroen C4 Picasso/C4 SpaceTourer and seven-seat Grand C4 Picasso/SpaceTourer.

We’d also take a look at the BMW 2 Series Active Tourer, which is well made and spacious, too. It comes with a range of impressive engines and transmissions. 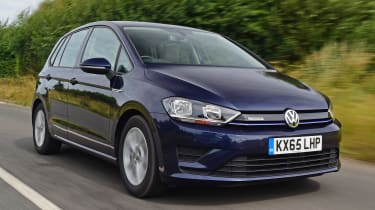 All Golf SV engines were Euro 6-compliant, apart from examples of the 1.6 TDI engine built before summer 2015.

Shock absorbers can fail prematurely, so check for signs of leaking. The nearside front seems to fail first, but they should be replaced in pairs.

The 1.5 TSI could hesitate when pulling away, especially when cold. Software updates from summer 2020 seem to have fixed the problem.

We haven’t heard of any faults specifically affecting the Golf SV, but many Mk7 Golf owners swap the car’s standard halogen headlight bulbs for different options. Other drivers have trouble pairing their smartphones to the infotainment system.

The SV is based on the Golf Mk7, so the dash looks very familiar; it’s carried over virtually unchanged. As such it’s very clearly designed, while the fit and finish are exemplary. In SV form the Golf is ultra-practical, with extra headroom for everyone, more rear-seat legroom (the back seat slides back and forth), and extra carrying capacity in the boot.

With the back seats in place, the boot can stow up to 590 litres, or 1,520 litres with the seats folded (compared with 380 and 1,270 litres for the Golf Mk7 hatch). The eight-inch infotainment touchscreen is lifted straight from the Golf Mk7. A 9.2-inch touchscreen was an optional extra.

Golf SV owners can choose between fixed-interval or flexible (variable) servicing. The former requires check-ups every 12 months or 9,300 miles, while the latter allows up to 18,600 miles or two years between garage visits, depending on how the car is driven.

Once a Golf SV reaches its third birthday (and up to the point that it’s 15 years old) it’s eligible for cut-price maintenance, with a minor service pegged at £184, while a major is £364. Many newer cars will come with a transferable service plan, to cut maintenance costs.

Brake fluid should be renewed after three years, then every two years, at £69. All engines have a cambelt that needs replacing every five years (£669, including a new water pump). Diesels have a 130,000-mile limit between cambelt changes, but there’s no cap for the petrol engines.

There have been three safety-related recalls for the Golf SV, the first of which was issued in January 2017, because of faulty exterior lighting. The second action came two months later, because of airbags and seatbelt pretensioners that could fail to activate correctly in the event of a collision. Almost 4,000 cars across multiple Volkswagen models were affected by this campaign.

Another recall was launched in February 2018, due to faulty airbags. Just a handful of early cars were affected. As well as these three safety-related campaigns, the Golf SV was also caught up in Volkswagen’s diesel emissions recall, which entailed software updates. Known as the EA189 service action, any Golf SV affected should have been updated by now. You can find out more about the programme at tinyurl.com/2uerva8w.

The Golf SV hasn’t appeared in any Driver Power survey, because it never sold in big enough numbers, but the Mk7 Golf on which it was based has. The last time was in the 2019 new (41st out of 75) and used car polls (34th out of 100). In the latter survey, owners liked the fuel economy, driving experience, visibility, practicality and ergonomics. Servicing costs, ventilation and seat comfort weren’t praised, however.