New Renault ChangeNow hydrogen concept ahead of reveal on 19 May

A new hydrogen concept car from Renault has been teased with its full reveal scheduled for this year’s ChangeNow summit – a gathering to put a spotlight on the world’s environmental challenges.

Renault’s new video highlights some design details not seen before including several interior screens and new spaced out Renault badging.

In the latest post, the French firm also confirms the concept car will be made from 70 per cent recyclable materials.

The concept’s environmental credits don’t end there however as it’s expected to exhibit a hydrogen powertrain which could be taken from the Renault Master Van H2-TECH – a hydrogen van equipped with a 30kW fuel cell.

We’ve already seen a teaser image of the front end of the concept vehicle, revealed by CEO Luca de Meo at the company’s 2021 financial results earlier this year. It shows a fairly slim headlight line and front grille, along with a substantial drop to the bottom of the front bumper, accentuated by tall daytime running lights. This points to the car being taller than the new all-electric Megane and, most likely, a full-blown SUV in profile. 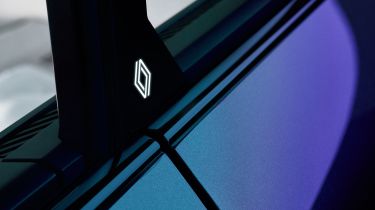 on 19th May at @ChangeNOW_World, discover our new #conceptcar – 70% of which is made from recycled materials as well as being 95% recyclable. let’s change cars and pave the way towards a #sustainable mobility.#environment #safety #inclusion #H2tech pic.twitter.com/5SorKf8E4N

In February, De Meo said, “We will soon launch a concept car. We wanted to materialise our vision of sustainability, based on the three pillars – safety, inclusion and environment – on one product. This concept will announce a future product. When we do concepts at Renault, we want to turn them into real cars.”

The new concept car is the latest to come from Renault in what has been a busy few years for the concept design team – following the Renault Morphoz, all-electric 5 hatchback and the AIR4 flying drone.

The ChangeNow event will take place in May at the Grand Palais Ephémère and the Eiffel Tower with Renault revealing its new sustainability-driven concept at 8:00am on the 19th of May.