Over the years Kia’s Sorento has evolved from being a large, practical and cheap family SUV into a large, practical and classy one. The price has shifted in line with the upturn in quality, design and technology, but it still feels like you’re getting a lot for your money with this big Kia. The difference is that now the top seven-seat SUV contenders are direct rivals for the Sorento.

The ride is firm, and you can pick holes with some of the interior materials, but with a wide range of engine options, loads of space and impressive equipment levels – even at the bottom of the range – Kia’s effort has a lot going for it.

Car buyers with big families naturally gravitate towards big vehicles with plenty of space. In today’s market, with the fortunes of the purpose-built MPV on the wane, that largely limits those with a lot of children or luggage to a van with windows and seats, or a large SUV.

The Kia Sorento has been a force in the large-SUV market since the first-generation model launched in 2002. Today, we’re on the Mk4 Sorento, and it’s a model that clearly shows how Kia has matured as a car brand in the intervening years. The original Sorento was a budget option, a large seven-seat SUV for the price of a mid-size five-seater from one of the leading mainstream brands at the time. Today Kia is one of those mainstream brands, offering products that stand comparison with models from the Fords, Volkswagens, Renaults and Peugeots of this world in terms of style, build quality and technology. Indeed, with this Sorento, Kia has designs on surpassing these rivals and pushing further upmarket still.

The fourth-generation Kia Sorento was revealed to the public early in 2020 and went on sale in the UK later that year. It’s a seven-seat SUV in all its guises, with Kia saying there are no plans for a five-seat model, and it sits at the top of a crowded Kia SUV range. Below the Sorento are the mid-size Sportage and smaller Stonic but Kia also offers the XCeed crossover as well as the Soul EV and the e-Niro electric SUVs.

In terms of direct rivals, the Sorento is in the mix with a clutch of desirable full-size seven-seat SUV options. The Skoda Kodiaq and SEAT Tarraco from the Volkswagen Group share technology, while the Peugeot 5008 is another worthy candidate. Land Rover has the Discovery Sport or the larger Discovery, and the Sorento splits these models in terms of price starting at around £40,000.

What you pay for your Kia Sorento will depend on your choice of powertrain and spec. Kia keeps the trim-level side of things relatively simple with three equipment bands, named 2, 3 and 4. Under the bonnet you have a further three options: the standard 2.2-litre CRDi diesel with an eight-speed DCT dual-clutch automatic gearbox, a full hybrid with an electrically assisted 1.6-litre T-GDi petrol engine and a six-speed auto gearbox, or a plug-in hybrid that uses the same petrol engine and gearbox but increases the battery size to 13.8kWh, enabling up to 35 miles of electric-only travel. All models are four-wheel drive. 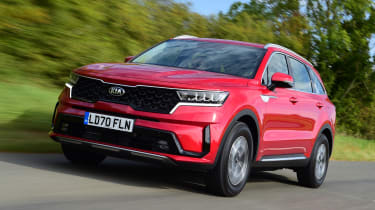 In terms of standard equipment, the entry-level 2 models get 17-inch alloy wheels, digital instruments and an eight-inch touchscreen infotainment system. The seats are cloth rather than leather, but the front ones are heated and so is the steering wheel. There’s also a reversing camera, smart cruise control with Stop and Go functionality, LED headlights and a lot of safety aids.

The Sorento 3 models have 19-inch wheels and the more impressive 10.25-inch touchscreen, plus leather trim, keyless entry and start, a powered tailgate, wireless phone charging and ambient lighting in the cabin. The top-spec 4 cars have higher-grade Nappa leather trim, a panoramic sunroof, head-up display, Bose 12-speaker stereo, ventilated front seats and a 360-degree Around View Monitor to help when parking or venturing off-road. As tends to be the way with Kias, you get a lot of kit for your money with the Sorento, at every level.

The history of the Kia Sorento dates back to 2002, with the Korean SUV evolving from a budget seven-seater into a more refined, mainstream model, able to compete with the class best. It’s no longer a cheap option, but improvements in styling, interior quality and onboard tech reflect how much the Sorento has matured. Reliability has always been a plus point of Sorento ownership, and well cared for used examples should still prove dependable.

The Mk3 Sorento came with a choice of five or seven seats, along with a strong 2.2-litre diesel engine. Buyers wanting some off road ability will probably look to the four-wheel drive versions, while there’s also manual or automatic models to consider. Equipment levels are high across the range, with even entry cars including a DAB radio, Bluetooth, air-con, rear parking sensors, privacy glass and cruise control. Read our full Mk3 Kia Sorento buyer’s guide here…

As a capable seven-seat SUV with good towing capability, the Mk2 Sorento offered a reliable alternative to the agricultural Mitsubishi Shogun or Toyota Land Cruiser, while it undercut the significantly more expensive Land Rover Discovery on price. Both front- and four-wheel-drive examples are available, with petrol and diesel power featuring in the lineup. Read our full Mk3 Kia Sorento buyer’s guide here…

The Mk1 Sorento was priced in a category below its size, which meant you got a lot of 4×4 for your money. It wasn’t bad looking for the time and, tacky interior wooden trim aside, it was surprsingly well equipped too. Most examples came with a 2.5-litre diesel engine, although it didn’t offer much pace.

For an alternative review of the Kia Sorento, visit our sister site carbuyer.co.uk…