The Jeep Wrangler is a four-wheel drive icon that’s better than ever before in its latest iteration. It offers significant improvements in all areas but it’s expensive to buy and run; compare its efficiency and luxury with the average premium SUV from Europe, and it really trails. It’s not at the cutting edge when it comes to safety tech, either.

You get more for your money these days at least, and the latest generation has been subjected to a root and branch overhaul designed primarily to make it easier and more practical to live with. If you want an off-roader that’s virtually unstoppable over challenging terrain, the Wrangler clearly has what it takes.

There are few automotive icons left with the sort of bloodline that the Jeep Wrangler boasts. It traces its roots back to the dark days of the Second World War and the Willy’s Jeep, itself born from the US army’s desire for a capable off-road runabout with rudimentary weather protection and a folding windscreen (making them stackable for easy shipping). It has spawned imitators ever since but amazingly after three quarters of a century, the Jeep Wrangler still holds true to the 1940s format. Today’s all-new model has a simple boxy body dropped onto a basic chassis.

There are three trim levels and two body styles in the UK – Sahara, Overland and Rubicon in two- or four-door versions. Prices start from around £54,000 for the entry-level two-door and climb to almost £58,000 for the four-door, top-spec model.

You get more for your money these days at least, and the latest generation has been subjected to a root and branch overhaul designed primarily to make it easier and more practical to live with. Upgrades to the suspension, engine efficiency, safety tech and roof mechanisms have all been part of the programme.

The diesel engine option is no longer available, which leaves the 268bhp 2.0-litre petrol unit with an eight-speed automatic gearbox, along with the 375bhp 4xe plug-in hybrid model.

Chief rival to the Wrangler is the Land Rover Defender, which combines the elusive cool factor with all the off-road ability you could ever want, while customers might also be persuaded towards the Land Rover Discovery Sport, Toyota Land Cruiser or a lifestyle-oriented double-cab pick-up in the shape of the Ford Ranger.

Although Jeep is able to make a big noise about the improved road performance of the latest Wrangler, it’s all relative, and perhaps more a comment on how unruly the last version was.

Get behind the wheel of the new one, and compared with pretty much anything else in the premium SUV sector, you’ll find the ride bouncy, the steering vague and the road and tyre noise intrusive. There’s no manual gearbox option, but the auto performs pretty well and helps to reduce the workload. The overall ride and handling of the Wrangler is much closer to one of the ‘lifestyle’ pick-up trucks. That’s good enough for many people, of course, and with the roof open on a sunny day the Jeep’s unsophisticated nature is all part of the fun. On a dark November morning on the school run it could easily feel like a chore. We’re fans of the smooth-shifting eight-speed automatic gearbox, however.

Where the Wrangler excels is over rugged terrain, thanks to its low departure angles and high ground clearance. Indeed, in Rubicon trim with low-ratio gears, heavy-duty axles, locking differentials and various other off-road trinkets, it’s virtually unstoppable.

On UK roads, even the short-wheelbase Wrangler feels large, a little dated in the chassis department and not especially comfortable. The 2.0-litre petrol offers a turn of pace that’s actually pretty impressive for a car of this type, but the Wrangler is not equipped to make the most of this on the road – the Land Rover Defender is a far better drive.

The 197bhp 2.2-litre four-cylinder diesel previously seen elsewhere in the Fiat and Jeep line-up is no longer available. It’s actually pretty refined unless you really want to thrash it, when it takes on a bit of boom. Otherwise it idles relatively quietly and will whisk you to 62mph from rest in just 9.7 seconds, although maximum speed is only 99mph. If you opt for the petrol engine you’ll get off the mark even more quickly, with a 0-62mph time of around seven seconds.

‘Tread lightly’ is one of the eco-focused watchwords of the off-road set, but the term was coined before CO2 overtook tearing up fragile landscapes as the environmentalists’ primary concern.

The Wrangler 4xe PHEV model offers greener credentials, with combined economy of around 67mpg and CO2 emissions of 79g/km for the Sahara version, compared to the pure petrol model’s 22mpg average and 242g/km.

If you source a diesel model on the used market, the 2.2-litre oil-burner should return a claimed 37.7mpg on the combined cycle, while emitting 197g/km of CO2 (in the short-wheelbase car).

The Wrangler sits in insurance groups 37 to 41, depending on specification. The Rubicon two-door diesel versions are the cheapest to insure at group 37, while the four-door model is just slightly more expensive, at group 38.

Petrol-powered Wranglers are all in group 41, with the exception of the two-door Rubicon model which is rated at group 40. By way of comparison, the oil-burning Toyota Land Cruiser versions are slightly cheaper to insure, being placed in groups 35-37, while the new Land Rover Defender is able to offer diesel power starting from group 27 (group 28 for the entry-level petrol version).

The outgoing Jeep Wrangler has a very strong reputation for holding onto its value, which is a testament to the ageless appeal of the slowly evolving design. The 2018 model has all the old version’s intrinsic appeal; according to our experts it should hold on to around 48 per cent of its value after 36,000 miles and three years, come trade-in time. 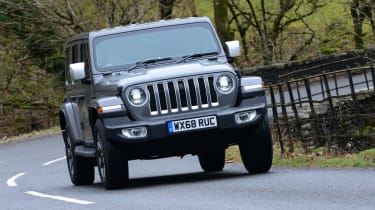 In every direction, the new Wrangler is a little bigger than its predecessors, but not so much that you’d notice from the outside. It features a revised grille and bumper, slightly more overtly flared plastic wheelarches and more obviously ‘designed’ rear light units. The windscreen is noticeably raked this time around, in the quest for a bit more aero efficiency, but it’s still very upright compared with most other passenger vehicles on the road.

Climbing up into the car remains a bit of a stretch, but once inside the driving position is as upright as in Wranglers of old. However, the cabin ambience is much improved thanks to the use of soft-touch materials, and while the dashboard is still utilitarian, it now features a touchscreen with intuitive controls. The facia also has a very attractive retro feel, designed to evoke memories of the metal panel dashboards in early Jeeps.

It’s always been possible to remove a Wrangler’s doors and windscreen, but the new model makes it much easier. The windscreen folds after removing four bolts, and the doors unclip in a much simpler fashion.

You also get a choice of three types of roof. There’s a manual set-up with lift-out panels, an electric sliding option and a removable full hard-top.

Jeep offers a 8.4-inch touchscreen as standard in the Wrangler. Sat-nav is included, as is Apple CarPlay and Android Auto, so you can hook up your smartphone. The latter system is responsive and intuitive to use; it’s joined by a 7.0-inch TFT screen in the instrument binnacle that can display off-road information and sat-nav directions. There’s also an Alpine audio system with eight speakers and steering wheel-mounted controls.

Even in the four-door Wrangler, cabin and luggage space is a bit tight, but the two-door is 550mm shorter and has a smaller boot than a SEAT Mii electric city car.

The Wrangler is pretty high up so can be awkward to get in and out of, especially for those accessing the rear seats on the two-door model. The back doors on the four-door are relatively narrow, too, and there’s no seven-seat option.

Visibility out of the Wrangler is pretty good, with a commanding view and relatively slim windscreen pillars. The boxy design and bluff ends make the Jeep easy to place in confined spaces as well.

A big, externally-mounted spare wheel can make the tailgate heavy and unwieldy to open and close, and means you can’t raise the rear window of the hard-top without swinging the lower door out of the way.

There’s plenty of leg and shoulder room for passengers in the front seats of the Wrangler. The extended length of the four-door car means space in the back is acceptable, too, although the seats feel upright. In the two-door the rear seats are cramped, as well as awkward to get into.

The Wrangler two-door has a boot capacity of just 192 litres with the back seats in place, but if you only have occasional rear passengers you can fold the seats forward to create a 1,328-litre load bay (up to the roof). The four-door fares a bit better with a 533-litre boot; this extends to 2050 litres when the seats are folded down behind to the front row.

The Wrangler’s rugged simplicity has always been a selling point for those wishing to take their vehicle off road, and the latest version isn’t really any more complex than its predecessor from a mechanical point of view.

There isn’t the array of electronic safety equipment you’d expect to find on most SUVs in this price range these days. It seems a bit stingy that only four airbags are included, and you won’t find features such as automated brake assistance. Although a blind spot warning has made it onto the car, there isn’t much else to crow about.

This lack of safety kit cost the Wrangler when it underwent the Euro NCAP crash testing in 2018. Achieving only a one star rating, the Wrangler was marked down heavily for a lack of on-board safety equipment (32 per cent). Adult passenger security was given just a 50 per cent score, while child occupants fared slightly better at 69 per cent. Pedestrian safety managed no better with a rating of 49 per cent.

Jeep offers the Wrangler with a standard 36 month warranty, which is the same as Land Rover rivals, although Toyota provides the Land Cruiser with a five year, unlimited mileage warranty.

Jeep provides flexible servicing plans for up to 5 years, so you’re able to spread the cost of your vehicle’s required maintenance.