Driving an electric or hybrid car will almost always reduce your running costs when compared with a petrol or diesel. But increasing energy costs mean drivers will be looking to plug in where there is the chance of some free power, such as a supermarket, public car park or at work.

In addition, there are some big savings to be made by moving to a cheaper overnight tariff, which will allow you to top up at a third of the cost while you are asleep. To take advantage of these cheaper miles, you need to have the right cable to make sure you can top up wherever you find a three-pin socket, so long as the mains wiring is up to the task of charging a car.

Our leading lead has been the adaptable but expensive Juice Booster, but the Simply Auto cable offers clever technology that lets you time your charges and their speed. It’s not perfect, but it takes the win here.

Simply Auto’s new range of charging cables includes simpler (and cheaper) connectors, but we tested the Premium model, which has a fixed three-pin plug and some handy smart features.

You can manually adjust the current flow between eight, 10 and 13 amps, which allows owners to make the most of the output from solar panels. There’s also a timer to delay the charge to take advantage of cheaper overnight energy. 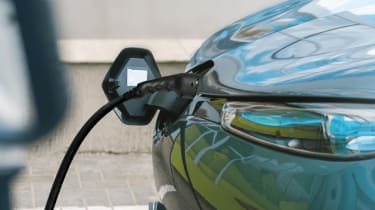 Settings are controlled via a simple screen that displays how much charge has flowed through the cable – handy if you’ve got to pay for the energy. It costs at least £150 less than most genuine manufacturer-branded cables.

The Booster 2 still looks like a costly option, despite a price cut since we last featured it. But it could still pay for itself if you are able to connect to a free power supply.

Its real advantage are the interchangeable heads, which let you connect to a variety of sockets, ranging from a standard domestic outlet to the 22kW three-phase supplies at industrial premises. These can allow you to charge a car more than 10 times faster than a three-pin plug.

If you don’t need this adaptability, the Juice Booster isn’t as sophisticated as the Simply Auto, with LED indicators rather than a screen, so less information, and it doesn’t allow you to set a timer. There’s no denying it’s expensive; you could buy two separate cables for the price of a Booster 2.

Now read out list of the best electric cars here…