Plans for the pure-electric ‘ID.1’ supermini have been pushed back to 2025, but this new design sketch shows what Volkswagen’s rival to the Vauxhall e-Corsa and Peugeot e-208 will look like when it does finally arrive.

This new sketch is our best look yet at the new all-electric ID model and we can see it’s much more in-line with the ID.3’s design. The headlight design flowing into a central VW badge is very similar, as is the overall rounded shape. The wheels are also reminiscent of the 19-inch ‘Andoya’ wheels of the top-spec ID.3. The design is vastly different to the chunkier ID.Life concept Volkswagen we drove last year, which was originally tipped to be the design inspiration for this ID.1.

VW passenger cars boss Ralf Brandstatter said of the ID.1 plans that “an electric car under the ID.3 – with an entry-level price starting at €20,000 (£17,300) – are pushed up by two years to 2025.” Whether or not VW will be able to match that price come 2025 with the ongoing difficulties in sourcing car automotive components remains to be seen.

The ID.1 is being pitched as an all-electric alternative for the Polo and will sit under the ID.3 on a new, smaller platform. Plans for its launch have been delayed, however, with VW now focusing its efforts on the new ID.Buzz minibus.

The hatchback is expected to play a key role in VW’s latest expectation for EVs to make up 70 percent of its European sales by 2030, given the continued popularity of the B-segment in Europe.

VW recently announced its new battery factory in Sagunto, Spain will begin construction in early 2023. The plant could be the firm’s hub of production for batteries for its ID range along with electric cars from elsewhere in the VW Group family.

Once the ID.1 is on the market, it’ll be joined by a new B-segment crossover based on the same underpinnings, potentially called the ID.2. However, this crossover’s existence is entirely dependent on Volkswagen meeting its targets with the ID.1’s development costs.

Official details on Volkswagen’s Polo-sized electric hatchback are still thin on the ground but, executives have dropped a few hints about what the future could hold.

In 2019, SEAT was appointed by Volkswagen to lead the development of the two entry-level MEB cars. Former technical development boss Axel Andorff (who is now in charge of Skoda’s MEB product line), told Auto Express that it would make sense for the project to deliver similar packaging gains as the ID.3, potentially producing small electric superminis with the same space inside as a Golf. 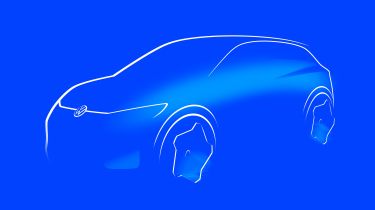 Andorff told Auto Express, “If you set up a totally new platform, why shouldn’t you use the advantages of this platform?” However, he added that the project would need to make significant savings over the MEB platform to make the finished cars financially viable.

“Nobody can do this on their own,” he said. “We’re relying on the experiences that the team already has from MEB. But we also know that just a little improvement of the MEB, on costs and so on, will not be sufficient for what we need for a small battery-electric vehicle.”

Volkswagen has since taken responsibility for the development of the MEB entry-level cars back from SEAT.

He said: “Every two or three years, we see improvements in battery technology and electrochemistry. If we speak about [a smaller] MEB entry, I don’t think it will happen before 2023 – and there will be at least some improvements by then.

“But if you go for a smaller concept, where they don’t need a range of 500km, or where they could never afford a battery capacity of 80kWh, for example, it could be a possibility – especially when you keep in mind it should improve over the next three years.

“We are happy with the tech we have for the first wave of ID. – and now we’re looking again at how we could bring the costs down. It’s no use going down from Golf-size to Polo-size, and then saying: ‘We’ve saved 50 euros on the bare chassis.’ We have to look across everything. Could we offer it with a smaller motor? It’s a smaller car, and you can get a Polo with lower-powered engines than you can get in a Golf.”

However, despite a focus on lower-powered batteries and less potent motors, Welsch didn’t rule out the possibility of offering a longer-range version of the ID.1. He said: “Because it’s part of MEB, we can still have larger capacities [of battery].

“We wouldn’t need to stop at 40kWh, for example – if I have the space between the axles, I can use it. So even with a smaller wheelbase I could imagine going for, say, 60kWh, because we know from the Polo that some customers of that size of vehicle do want to go for longer journeys as well.”