American EV firm Fisker has lifted the lid on its forthcoming Ronin high performance flagship, an all-electric four-seat, four-door convertible that promises a range of 660 miles on a single charge. The car’s unique layout will put it in a class of one when it arrives in 2024 and joins the brand’s line-up alongside the Ocean SUV.

Initially teased as what looked like a four-door fixed-head GT earlier this year, these images show the Fisker is actually convertible. As a result, the Ronin will be a one-of-a-kind machine, with no other manufacturer offering this unique layout with an all-electric powertrain. There’s no word on a power output yet, but the company has revealed the car will have three motors and be capable of 0-62mph in under two seconds.

The Ronin is designed by the brand’s CEO Henrik Fisker, who also penned the BMW Z8 and numerous Aston Martin models. Despite its electric underpinnings, the Ronin appears to adopt similar proportions to a traditional front-engined GT car. There’s a long bonnet and a sharp, pointed nose, with multi-element LED running lights integrated into the bumper.

The bonnet rises over the front wheels and to a steeply raked windscreen, and the Ronin is fitted with a pair of slender digital door mirrors and active aerodynamics systems. A visible shutline along the flanks indicates that the new sports car will be a four-door model in the mould of the first Fisker production car, the Karma, from 2011.

One of the big challenges for the team will be engineering a structure that is strong enough to pass crash regulations, while also delivering the unique four-door drop-top layout. In particular, the lack of a B-Pillar will require a heavily strengthened floor to allow the car to withstand side impacts. As a result, it’s likely the Ronin will use plenty of strong and light materials in its construction, such as carbon fibre.

Adding to the car’s bespoke appeal will be what boss Henrik Fisker calls “unique doors for better ingress and egress”. While refusing to elaborate on this, it’s likely that Ronin could feature Rolls Royce-style rear-hinged design. The car has also been designed to seat four passengers in comfort, with space for luggage. It’s also been revealed that the luxurious interior will feature vegan materials in a bid to boost the model’s environmental sustainability. 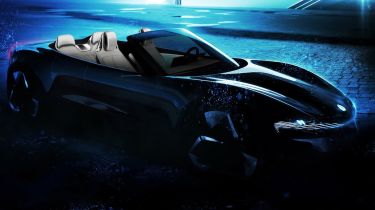 According to Henrik Fisker, with a target figure of 660 miles, the grand tourer could also provide the longest range of any production EV, thanks to a battery pack integrated into the car’s body structure: “The aim is to achieve the world’s longest range for a production EV, combined with extremely high levels of performance. Project Ronin will be a showcase for our internal engineering, powertrain, and software capabilities”, said the CEO.

Development of the Ronin will be undertaken by the brand’s engineering centre in the UK, dubbed Fisker Magic Works. Overseen by former Aston Martin executive David King, the division will also be tasked with the engineering behind other low-volume, rapid-development vehicle programmes and special versions of Fisker models – a similar brief to King’s previous work where he was in charge of Aston Martin Special Operations.

Speaking about the Magic Works division, Fisker has previously said the brand is “on full speed to deliver four distinct vehicle lines by 2025, driving innovation forward and pushing radical new ideas into the global car market. Fisker Magic Works provides us with an opportunity to create sustainable and fantastic vehicles outside the confines of established industry segments.

Bringing on David King further strengthens our engineering and creative expertise, and I’ve already assigned him two exciting projects which will showcase our capability in highly specialised materials and technologies designed especially for the eco-conscious automotive enthusiast.”

Fisker also outlined that the eventual production car would be priced from “just under $200,000” or a little less than £160,000 when it goes into production in the second half of 2024.