Kia has revealed its facelifted Soul for the US market, showing us what the updated Soul EV could look like once it launches later this year in the UK.

The Soul is sold exclusively as a petrol model in the US, while in the UK we only get the all-electric Soul EV.

The US facelift gets plenty of revisions at the front, where the new Kia logo is incorporated into the upper blanked-off grille between the two headlights, which have also been redesigned with a different daytime running light signature. The lower grille shape remains the same but with new chrome detailing, while the fog lights are now much smaller and lower down. 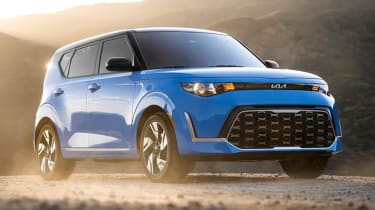 The sides remain largely unchanged, aside from a simpler lower trim and a new alloy wheel design. Head to the rear and you’ll find a central exhaust, which will obviously be omitted from the Soul EV, plus vertical rear reflectors rather than the current model’s horizontal ones. The rear lights haven’t changed shape, but they look to have a darker finish.

The Soul looks virtually identical inside, although it does feature some altered heating vents and trim on the door cards. In all other respects Kia has kept the same formula, meaning you get the same ​​10.25-inch touchscreen infotainment system as opposed to the larger twin 12.3-inch screens of the new Sportage.

The powertrain for the new Soul EV will almost certainly be the same as the upcoming Niro EV. Expect a 64.8kWh battery producing 201bhp and 255Nm of torque. Maximum range is likely to be marginally higher than the current car’s 280 miles, while charging rates should also be better with the 77kW charger able to replenish 80% of the battery in around 45 minutes.

Check out the best electric cars you can buy now…