Mercedes-AMG “The Flip” revealed as one-off sports car for will.i.am

Mercedes-AMG has revealed a new sports car created in collaboration with music star will.i.am, a founding member of the Black Eyed Peas. Called “The Flip”, the radical coupe is based on the AMG GT 4-Door and takes its cues from the iconic G-Class SUV and the SLS Gullwing supercar.

The American music mogul and star of The Voice TV show enlisted the help of vehicle modification specialists West Coast Customs to design the new car. Supporting disadvantaged students was one of the project’s key motivations – activities surrounding “The Flip” will fund the singer’s i.am/Angel Foundation, which promotes STEAM-based careers (science, technology, engineering, arts and maths).

Speaking about “The Flip”, will.i.am said: “For a lot of inner-city kids, owning a Mercedes is a symbol of progress and advancing out of struggle. Now I’ve reached my goal and pushed even higher by re-imagining and creating my own vision of an AMG model. But I didn’t touch the engine, because AMG really does make the best engines.”

While this indicates that power output will be unchanged from the donor car, Mercedes hasn’t revealed which variant of the AMG GT 4-Door underpins “The Flip”. The most powerful pure-combustion engined model is the GT 63 S, which produces 630bhp and 900Nm of torque from its 4.0-litre twin turbocharged V8.

However, the AMG GT 4-door 63 S E-Performance is the most potent variant outright, and adds hybrid assistance. If “The Flip” borrows its powertrain from this model, then expect a colossal power output of 831bhp and 1400Nm of torque. 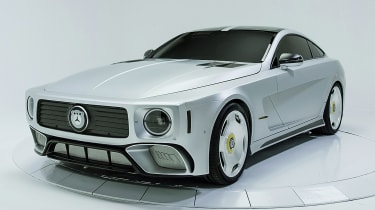 The car’s design is quite unlike anything currently offered by Mercedes’ performance division. “The Flip” has a traditional long-bonnet profile, but the details are less conventional – the sports car adopts the bluff front end design from the brand’s G-Class SUV, which frames the music star’s unique BEAR WITNESS logo.

Like the G-Class, this one-off AMG has a flat front surface and a pair of round LED headlights. The clamshell bonnet has a central crease that splits in two over a glass roof, and there’s a hard-edged shoulderline along the car’s flanks.

The doors are particularly striking, with a rear-hinged design similar to that of the Rolls-Royce Wraith. There’s also a deep vent cut behind the front wheels, which are diamond-cut five spoke items, not dissimilar to AMG’s famous ‘monoblock’ design.

There are no images of the rear of the car, but a previous teaser video revealed a pair of slender LED tail lights similar to those of the standard AMG GT 4-Door. The cabin hasn’t been shown either, but will.i.am has chosen a blend of cream and black upholstery with diamond-stitched seats. “The Flip” will make its public debut at this weekend’s Formula 1 Grand Prix in Miami.

Which artist and manufacturer collaboration would you like to see? Let us know in the comments…