The updated CX-5 has made a good first impression on us. Some busy weeks ahead should enable us to rack up the mileage pretty quickly and see whether the fuel economy shows that diesel power is still a worthy choice for some people.

Diesel is dead – or so we’re constantly being told. The VW Dieselgate scandal inflicted a brutal blow on this fuel’s popularity, and then the relentless push towards electrification has done the rest.

With new pure-electric models arriving every day, and petrol plug-in hybrids becoming the default choice for company-car choosers trying to minimise their Benefit-in-Kind tax, is there even a place for diesel models in the market any more?

It’s time to find out, because Mazda is one brand keeping the faith. The Japanese company’s forthcoming CX-60 flagship will have a brand-new, state-of-the-art diesel engine in its line-up when it arrives later this year. And in the meantime, the recently updated CX-5 family SUV range features a choice of diesel powertrains.

It must be said that as Auto Express’ highest-mileage driver, I’m probably the ideal person to run a diesel vehicle. I rack up at least two or three long journeys per week, travelling across the country to photoshoots of new models or the fleet cars of my colleagues. Switching to an EV would mean hours of my week being lost to en-route charging, and PHEVs would be pushed far beyond the comfort zone of their pure-electric range. Their real-world economy would struggle as a result.

So it was with some eagerness that I rocked up at Mazda’s UK headquarters in Kent to collect the newly updated CX-5. James Crouch, the company’s senior marketing manager, was present to hand over the keys and explain some of the improvements introduced on what is a key vehicle for the company (the CX-5 accounts for more than one in four Mazdas sold in this country).

The most obvious change is evident from the moment I catch a glimpse of our car: it’s the new metallic paint finish, called Zircon Sand. In reality it’s more of a light green with a bit of brown thrown in, but most people seem to like it. I’m less convinced that it’ll catch on as much as Mazda’s stunning Soul Red, which looks awesome on everything from a 2 to the 6, but at least it’s different from black and silver.

Other alterations include a new front grille and revised headlight clusters, while inside there’s an updated dashboard that incorporates a larger 10.25-inch infotainment screen. The core packaging of the car hasn’t really changed, but that’s fine, because the CX-5 has always been a proper family-sized model. There’s enough space for me and my clan at the weekends, and a boot that’s capable of swallowing my photography gear on work trips.

This is not the first Mazda to have graced the Gibson driveway for a longer stint – I’ve had the 6 and, most recently, the current 3 – so even accounting for the evolution inside, there’s a pleasingly familiar feel to the CX-5’s cabin. I have noticed improvements in perceived quality, though, where the Japanese company has fitted top-notch leather on the upholstery, dialled the grade of plastics up a notch or two, and installed a solid 10-speaker Bose sound system.

Mazdas are often more impressive on the road than they are in the showroom, I’d argue, and the CX-5 is already living up to that billing. I was a bit worried that after enjoying the company’s excellent manual gearbox in those previous fleet cars, the new arrival’s six-speed automatic transmission would feel like something of a backward step. But in fact, it seems a very good match for the diesel, with intelligent kickdowns and smooth shifts in general.

It’s still too early to be thinking about economy, but this car has a claimed average fuel consumption of 46mpg and so far I’m managing just under 40mpg. I’m optimistic that as the number of longer journeys racks up, I’ll get ever closer to the official figure – and perhaps even surpass it.

But if I’m to do that, I’ll need to behave myself on the B-roads – and that’s trickier than you might expect, because a well sorted, slightly firm suspension set-up gives the CX-5 much  better body control than most of its rivals. Throw in strong torque and you end up with an SUV that provides a surprising amount of entertainment. 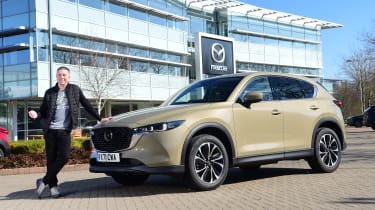