Volvo has come a long way in the past decade, and the V60 Mk2 is proof of that. This is a car that has it all: practicality, build quality, reliability, safety, ready availability and sensational looks. Even better, while you’ll pay a premium for V60 ownership, asking prices compare favourably with the obvious German rivals. The V60’s talents led to it scooping Carbuyer’s Compact Executive Car of the Year in 2019, and when we ran a D3 Momentum on our fleet in the same year, we loved everything about it. However, when we pitted a V60 against the 3 Series Touring and C-Class Estate in 2020, the Volvo came second behind the BMW, so be sure to check out the competition before committing.

Volvo and estate cars are inextricably linked. The Swedish brand (now Chinese-owned) led the way with the introduction of the Duett in 1953, and in the intervening years, Volvo became the brand of choice for those who wanted a safe and supremely practical family car.

More recently, Volvo discovered its styling mojo, with its current crop of cars offering some of the sharpest looks on the road. Even better, the Volvo V60 is as good to drive as it is to look at, and it doesn’t lack any of the qualities that have made Volvo estates so appealing for so long.

The second-generation V60 arrived in September 2017. Buyers could choose between 148bhp D3 and 187bhp D4 diesels, or there was a 246bhp T5 petrol; all of these powerplants were 2.0-litre four-cylinder units.

If you’re a low-mileage driver, then a petrol V60 makes sense; otherwise we’d choose a diesel for its blend of performance, economy and relatively low purchase costs. The plug-in hybrids can be very frugal, but they’re costly to buy and hard to come by.

It’s arguable that none of the V60’s rivals are quite as stylish, but they are all as desirable. The obvious alternatives are all German, starting with the BMW 3 Series Touring, which is more engaging to drive than the Volvo and comes with some impressive engines, but purchase costs are high.

As with the BMW, the Mercedes C-Class Estate is rear-wheel drive, beautifully built and practical, albeit not quite as roomy as the Volvo. The Audi A4 Avant has a high-quality cabin, is offered with front-wheel drive or quattro four-wheel drive and power comes from some impressive engines.

Another German option is the slightly less prestigious Volkswagen Passat estate, and we’d also suggest putting the Mazda 6 Tourer on your shortlist. 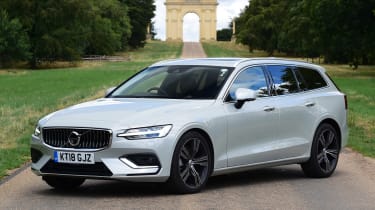 The Winter Pack added headlight cleaning plus heating for the windscreen, washer jets and steering wheel.

Volvo added a ‘Plus’ to four of the V60’s trim levels, then dropped it. From January 2022, the trims were renamed Core, Plus and Ultimate.

The V60 is well suited to towing, especially the D4 diesel and T6 Recharge plug-in hybrid versions. V60s are rated to pull between 1,800kg to 2,000kg.

One Carbuyer owner review mentions faulty windscreen washers, but other than that, we haven’t heard of many common issues with the V60 Mk2.

Yet another V60 high spot, the cabin features top-quality materials, is easy to use and has excellent seats. There’s loads of room front and back, and cubby space is also impressive, with plenty of storage around the interior. With the back seats in place the boot can hold 529 litres and with them folded the capacity is 1,441 litres to the roof, giving the V60 one of the biggest load bays in its class.

Volvo has recalled the V60 Mk2 eight times, first in November 2018 because of connectivity problems. Three recalls were issued in 2019; the first two were for faulty suspension parts, the third down to inlet manifold issues. The next action in March 2020 was for an AEB glitch. The three most recent recalls (in 2021) were for faulty airbag control units, fuel pump fuses and fuel gauge software.

Only two V60 owner reviews have been left on carbuyer.co.uk, both of which award it five stars. It’s not a big sample, but those owners love their cars.