BMW’s first SUV, the original X5, rewrote the rules on how a full-sized 4×4 could drive. Feeling more like a traditional estate car such as the 5 Series Touring and less like a wallowy, bulky off-roader, it set the tone for the firm’s other SUV and crossover models. One of the most successful has been the X1, which packages many of the X5’s strengths into a smaller and more affordable package.

Today, a used BMW X1 crossover is a great buy, offering engaging driving dynamics, lower running costs than its siblings and bags of premium appeal. These talents make it more useful in tighter, more densely populated areas, yet it’s equally as capable on the open road. The original X1 was released in 2009, while the current generation model joined the line-up in 2015.

Our used BMW X1 buyer’s guide reveals what to look out for in both Mk1 and Mk2 examples of the BMW X1, and why it might appeal to you as a compact family SUV…

The second-generation X1 went on sale in the UK in October 2015. Buyers could choose between the petrol-engined xDrive20i (with 189bhp) and the diesel-engined sDrive18d/xDrive18d (148bhp), xDrive20d (187bhp) and xDrive 25d (228bhp), all with a 2.0-litre displacement. All of these models offered four-wheel drive (xDrive), apart from the sDrive18d, which had power going to the front wheels only.

At first only SE, Sport and X Line trims were available, but within a month there was also an M Sport option.

A facelift in June 2019 brought a minor design refresh, with LED headlights fitted across the range, a three-cylinder 1.5-litre sDrive18i petrol option and an xDrive18d edition, while the xDrive25d was dropped. The X1 xDrive25e plug-in hybrid was added to the range in March 2020.

For high mileage drivers, the diesel engines’ combination of muscle and efficiency make them a good choice. The plug-in hybrid makes sense for a lot of drivers thanks to its ability to run on electricity alone for short urban trips. In any case, the slick automatic gearbox is a good choice for any of the models.

If you like the X1 but fancy something more overtly sporting the X2 might suit you better, because this more rakish junior SUV uses the same engines and transmissions, but looks much slicker. It’s a similar story where Audi is concerned: its smallest SUV is the Q2, which looks more distinctive than the bigger Q3, and like the X1/X2, both cars have user-friendly cabins, efficient engines and excellent build quality.

Sticking with German brands, the Mercedes GLA also offers excellent build quality and smart looks with impressive engines, while the slightly larger Range Rover Evoque looks great and has a luxurious cabin, plus it’s impressive off-road. Also worth a look are the Volkswagen Tiguan, Skoda Karoq, SEAT Ateca and Mazda CX-5, all of which are well made, good to drive and reasonable value.

Adaptive dampers were an optional extra; these transform the ride/handling balance, and are worth seeking out. 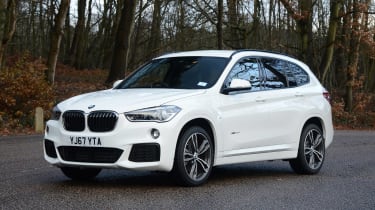 Have a look at the owners’ forums and you’ll see the sports seats are favoured over the regular items, which some find uncomfortable.

The original X1 arrived in 2009 and this carried the E84 codename. The second-generation X1, which we’re covering here, was codenamed F48

All X1s got conventional tyres, with run-flats (leading to a stiffer ride) as a no-cost option depending on which wheels were fitted. Bear that in mind on a test drive.

For decades BMW has focused on making its interiors as user-friendly as possible, with clarity taking priority over design flourishes, and this largely applies to the X1. The dash is clearly laid out, the build quality is exceptional and the cabin is both spacious and versatile. The X1 has enough head and legroom in the back seat for three, while the 505-litre boot can stow an impressive 1,550 litres if the rear seatbacks are folded down.

The X1 gets a user-friendly and fairly comprehensive infotainment system with sat-nav as standard, and the iDrive rotary controls work extremely well. Some buyers may wish to look out for used examples fitted with the more advanced Tech Pack, which was a £1,250 option when new and brought a larger, 10.25-inch screen and a head-up display.

All X1s have condition-based (variable) servicing, which means the car flags up when attention is needed. The system takes the condition of a wide range of items into account and indicates when work is due, but only those parts that need replacing will be renewed, so no two service costs are the same. However, services are usually needed every two years or 16,000 miles (diesel)/18,000 miles (petrol). An oil and filter change costs £200-£244; add an air filter and some spark plugs and the price rises to £339-£409. Brake fluid should be renewed every two years (£84-£104). All X1 engines are chain-driven, so no cambelt replacement is needed.

The second-generation BMW X1 has been recalled 11 times so far. The first two campaigns were launched in January and February 2017, and both affected X1s built between September and December 2016, some of which had been fitted with faulty airbags.

A manufacturing fault in the front axle led to a recall in July 2018; a month later, faulty crankshaft sensors caused the next action. Leaks from the exhaust gas recirculation cooler (with the risk of fire) led to a recall in December 2018; incorrect rear light fixings led to the next recall, in March 2019. The most recent four recalls came in April, June, August and October 2020, and were respectively issued for faulty steering assemblies, problematic airbags, faulty exhaust gas recirculation (EGR) coolers and plug-in hybrid battery glitches.

BMW as a brand came 21st out of 29 in our 2021 Driver Power customer satisfaction survey, which is nothing to shout about. The X1 Mk2 came 74th out of 75 in our 2021 Driver Power new car survey, which is a poor result. Even so, owners really are impressed by the X1’s performance and balance between touchscreens and physical buttons on the dashboard, but it is let down for its perceived value for money as a new car. As a cheaper, used purchase this is likely not to be the case.

The X1 is BMW’s biggest-selling SUV globally, and it’s easy to see why. With premium brands and SUVs both flying high in the sales charts, a car that combines both of these is bound to do well. After all, even though the X1 is the smallest of BMW’s seven-strong range of SUVs, just like its bigger siblings this pint-sized crossover offers great dynamics, an impressive cabin and excellent refinement. You’ll pay for the privilege of owning an X1, with high running costs one of the most common gripes. Only you can decide if the X1 is good value, but it’s a great all-rounder in a very competitive segment.