We love the Alfa Romeo Tonale’s style and the way it handles on a good road. But there are some elements clearly holding it back from being a real threat to the best premium compact SUVs out there. A powertrain that shows promise around town can’t live up to the expectations generated by the chassis on open roads, and we have concerns about how premium SUV buyers will feel about the interior quality. For these reasons, the Tonale sits in the chasing pack, just behind the outright class leaders.

Better late than never? That’s certainly an adage that Alfa Romeo is pinning its hopes on with the Tonale, the brand’s first entry in the compact SUV sector, and a rival for the likes of the BMW X1, Mercedes GLA, Volvo XC40 and Audi Q3.

You see, the new Tonale has been through a somewhat difficult birth. Presented in concept form more than three years ago at the 2019 Geneva Motor Show, the production version you see here has been developed through a change of ownership for Alfa, bringing with it a new boss with a grand plan to turn the marque fully electric by 2027. As a result, it has endured a few trips back to the drawing board – and a delayed launch as a result.

One hangover from the car’s development (being split between Fiat-Chrysler Automobiles and Stellantis-era Alfa Romeo) is that the Tonale’s platform is the FCA Small Wide 4×4 architecture shared with the Jeep Compass, rather than the EMP2 set-up, used by the likes of the Peugeot 3008, that the brand now has access to.

However, big changes underneath here include newly developed MacPherson strut suspension front and rear, plus the provision of electrification in every version of the Tonale, with a 271bhp plug-in hybrid model to follow the launch offering, which consists of two conventional hybrid models. These combine a 1.5-litre four-cylinder turbocharged petrol engine with a small battery and an electric motor attached to the seven-speed dual-clutch gearbox.

The less powerful of these two hybrid models develops 128bhp, but it won’t be offered in the UK. Instead, the 158bhp version is where the British line-up will kick off, with two trim levels: Ti and Veloce. A starting price of around £36,000 for the 158bhp Veloce car we tested looks likely to just about undercut the likes of the unelectrified 148bhp Audi Q3 35 TFSI in S-Line trim when it goes on sale in July.

The mild-hybrid aspect is apparent as you set off – but only if you pay close attention. There’s no obvious interactive aspect to the Tonale’s electrified drivetrain – no hybrid or EV mode buttons to flick through, nor anything like adaptive recuperation to change the aggression of the regenerative braking. It’s all very much hidden beneath the surface, save for a couple of information displays that you can summon on the digital instrument panel, revealing what the system is up to in real time.

With enough charge in the 0.8kWh battery, the Tonale can creep forward on electric power only. And if your throttle inputs are soft enough, you can coax the car up to around 20mph for short bursts, emissions free. There’s a good level of urgency to the electrically assisted take off that makes it eager and nippy to drive around town and in traffic.

However, the petrol engine and automatic gearbox aren’t the sharpest. With 158bhp and 240Nm of torque, an 8.8-second sprint from 0- 62mph and a top speed of 131mph are certainly respectable figures. But in practice, the hesitant nature of the transmission means the hit of performance isn’t quite as readily available as you’d hope – unless you flick the car into the Dynamic mode on the drive mode selector.

The engine, while impressive in how it quietly and competently interacts with the electrified elements at low speeds, is not a hugely entertaining performer. The drone is well suppressed at low revs and on the motorway, where wind noise – and particularly road noise on our car’s optional 20-inch wheels – take over.

That’s a shame, because some commendable chassis development has taken place here. Some distance has been placed between the agricultural nature of the Jeep Compass and the pleasingly agile Alfa Tonale, despite both cars making use of the same platform. 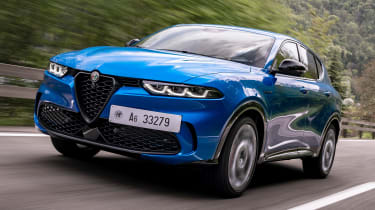 The steering feels positive and reactive to inputs, meaning the Tonale inspires confidence; when you turn in, the nose feels light and placeable. Combined with balanced weight distribution and a reluctance to roll that many rivals can’t match, the Alfa is strong dynamically, if you can look past the short falls of the engine. It doesn’t offer Porsche Macan levels of involvement, but it doesn’t cost Porsche Macan money either.

Our Veloce test car came equipped with two-stage electronic adaptive dampers, and at low speed around town, the ride felt firm – but it did smother potholes and scars just enough. Flicking the car into Dynamic firms things up further still, but a ‘Soft’ setting restores the damper profile to match default setting while keeping maximum engine performance and additional steering weight.

On the Ti model, frequency selective dampers are standard-fit. These are not driver adjustable via buttons in the cabin, but they change their level of rebound based on inputs from the road surface. The system’s baseline set-up feels firmer than that of the adjustable dampers you’ll find on the Veloce.

Appearances matter in this often style-driven segment, and though it’s a subjective matter, the translation of the Tonale concept into the finished item three years on is impressive. At 4,528mm long it’s one of the longest cars in its segment, but a roof height of just 1,601mm gives it a sportier stance than more upright rivals, such as the BMW X1.

The UK’s entry level trim-level will be Ti, offering 18-inch wheels as standard, plus a gloss black bodykit and full LED lighting front and rear. Veloce will be the bigger seller though, on 19-inch wheels and with touches such as dual chrome exhaust tips, further black exterior detailing and a ‘Dark miron’ bodykit with matte black detailing. Red brake calipers complete the look, while on the inside UK buyers will get Alcantara upholstery, aluminium pedals and shift paddles.

Here though, in our not-quite full production first taste, the seats are finished in vegan-friendly man-made leather. We’re told that while the fit will be improved by the time customer deliveries begin in September, the materials are more or less representative of final quality. And that’s a concern.

Put simply, premium brand rivals for the Tonale will have the Alfa comfortably covered when it comes down to interior quality. Soft-touch plastics are used on the dashboard’s top level and at hand height for the driver and front passenger. But the rest of the materials on show are harder and not as expensive, including rear doors where tough plastics are used top to bottom. Some items in the cabin feel outdated, such as the circular side vents, and there’s a slight flimsiness to them too. The centre console is made of light and thin plastic, although some tightening up has been promised.

Space is good up front and forward visibility is strong too, but the rear bench is a little hampered by a wide and sloping transmission tunnel, even if it should easily accommodate two adults. The flared shape of the C-pillars combined with the total lack of colour in the cabin means that it feels a little dark inside though.

There’s a 500-litre boot with a wide enough opening and an adjustable floor that offers a setting that sits flush with the rear bumper, and plenty of tie-down points are present, as is a 12v power socket. But quite a few rivals come with more outright carrying capacity.

As for the on-board technology, the 10.25-inch infotainment set-up is the same as the highest-spec unit in the all-electric Fiat 500. And that’s not a bad thing at all. It’s bright, pin-point sharp and fast to react to inputs, with logically laid out menus and widgets. Tech fans will find the Tonale’s standard Amazon Alexa integration a welcome feature too.

A strip of piano key-style switches run beneath the screen for the climate control, but some items – such as the heated seats – are controlled via interacting with the screen.