Abarth’s long lineage of special edition models has a new member in the form of this: the Abarth 695 Tributo 131 Rally. It’s a limited run version of the brand’s flagship hot hatch, the 695 Tributo, and as the name suggests it’s a tribute to the legendary Fiat 131 Abarth Rally racer.

The Fiat 131 Abarth Rally completed its final rally as a factory supported rally car 40 years ago, but before that it helped the brand win the World Rally Championship three times – in 1977, 1978 and 1980. This new 695 is a nod to that, and 695 units will be made available worldwide. Right-hand drive cars will come to the UK, too, with prices starting from £32,325.

Under the bonnet, the 695 Tributo 131 Rally comes equipped with the same turbocharged 1.4-litre four-cylinder petrol engine as the regular 695, developing 178bhp and 250Nm of torque. It sends this power to the front wheels via a five-speed manual transmission. 0-62mph takes a claimed 6.7 seconds and top speed is 140mph. 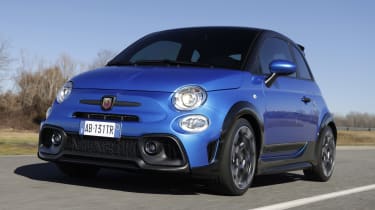 The powertrain is complemented by a special sports exhaust system called Record Monza Sovrapposto, with dual twin-tipped, vertically-aligned exhaust exits. The suspension includes trick shock absorbers from specialist Koni, while Brembo brakes are equipped as standard, with ventilated disks on the rear axle.

Also included are 17-inch wheels with a diamond cut finish, but the most visually apparent modification is the fitment of a new, large bootlid spoiler. It’s called the Assetto Variable spoiler and can be adjusted through 12 stages, from zero to 60 degrees. Abarth claims that in its most upright position it can generate up to 42kg of downforce at 124mph.

The blue and black shade is a tribute to colours used for original versions of the Abarth 131, while keen fans can find a number of ‘easter eggs’ around the car, including silhouette graphics of the Seventies original on the lower parts of the doors, the headrests and the Alcantara trimmed dashboard. Inside, these touches are joined by Sabelt fabric seats with blue inserts and stitching.