Genesis has confirmed UK prices and specifications for its first purpose made all-electric model – the GV60, which lands on sale in Britain on 6 June with three versions for buyers to choose from, plus a number of option packs.

The Genesis GV60 is built on the same E-GMP underpinnings as the Kia EV6 and Hyundai Ioniq 5 – our current Car of the Year. It’s powered by a 77.4kWh battery pack which, depending on which model chosen, sends its power to a rear-mounted electric motor or a dual-motor setup, the latter enabling four-wheel drive.

Prices will start from £47,005 for the Premium model. This makes use of a single electric motor rated at 225bhp, and Genesis claims a maximum range of 321 miles under WLTP certification. All-wheel drive is offered from £53,605 in the GV60 Sport, which uses a 215bhp motor on the rear axle and a 99bhp motor on the front, for a combined 314bhp and a claimed range of 292 miles from the same 77.4kWh battery.

The range is topped with the GV60 Sport Plus, offered from £65,405. This version delivers a 429bhp all-wheel-drive electric drivetrain capable of propelling the car from 0-62mph in four seconds flat. Range is reduced to 289 miles, but it also comes with a Boost Mode function that increases power to 483bhp for 10 seconds. There’s also a Drift Mode.

Genesis has confirmed the availability of 14 different paint colours for buyers to choose from, along with four option packs, alongside four standalone extras buyers can choose from. A £2,070 ‘Innovation Pack’ adds cutting edge cabin and driver assistance technology, while two more packs focus on seating comfort. Full Nappa leather upholstery is offered for £2,310, while a glass panoramic sunroof is available for £1,120.

Active noise cancelling helps improve refinement, along with a system called Road Preview. This uses data from a camera feed and the navigation to adjust the suspension settings on the fly for extra comfort.

With its 800V electronic architecture allowing for a maximum rapid-charge capability of 350kW, the GV60 can replenish its battery from 10 to 80 per cent in just 18 minutes, while the car’s maximum AC charging performance (for home charging, for example) has been increased from 7.2kW to 11kW, compared to its Hyundai and Kia-badged siblings.

As per other E-GMP products, the GV60 also supports V2L Vehicle-to-Load functionality, which means users can charge other electronic devices at a faster rate or run equipment such as a video projector. This is offered in the optional Outdoor Pack, available for £880.

There’s plenty of other clever tech packed into the GV60, starting with a feature Genesis calls Face Connect. As the name suggests, it’s a facial recognition system that allows users to unlock the car simply by looking at a sensor, similar to the ID systems used on some smartphones. The infra-red camera picks up the user’s face and automatically loads their pre-saved seat and mirror positions, infotainment and head-up display preferences.

In addition to this, Genesis has added a fingerprint authentication system and a digital key that syncs with the owner’s smartphone, meaning drivers can enter and start the car by simply touching the door handle. 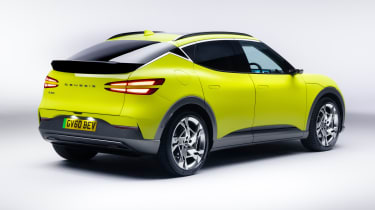 The cabin continues the tech-fest, with buyers getting a wireless smartphone charger and a pair of 12.3-inch screens – one to handle the infotainment functions and one to display the gauges. Like most modern cars, the GV60 also features over-the-air updates, but the capability goes far beyond improving the infotainment system.

The GV60 can also wirelessly receive upgrades for systems such as the suspension, brakes, steering wheel, driver assistance technology and the central brain that controls the car’s electric motors and charging system.

The GV60’s family resemblance to other Genesis vehicles is clear. The EV features the same split-level headlamps as the Genesis G70 Shooting Brake, for example, although the brand’s trademark radiator grille has been blanked off to improve aerodynamics. The grille is also down the front bumper than the firm’s combustion-engined cars.

You can chase this focus on aerodynamics around the rest of the GV60’s bodywork, with Genesis fitting pop-out door handles and cameras (which are linked to a pair of screens in the cabin) in place of conventional door mirrors. The EV even has a clamshell bonnet, which cuts into the front wings and helps to smooth out the air passing over the front of the car by moving the panel gap away from the most turbulent area of the vehicle.

Inside, Genesis has stuck with its design ethos of “Beauty of White Space.” The cabin has been made to feel as airy as possible, and the buttons on the dashboard have been kept to a minimum to give a clean look.

The instrument cluster and infotainment system is much like that of the GV80 SUV’s, but the centre console has adopted a new “floating” design. Thanks to the E-GMP platform, the GV60 also has a completely flat floor, which Genesis says provides more passenger space inside.

A design feature bespoke to the GV60, called the Crystal Sphere, is also mounted in this floating centre console. When the car is switched off it acts as a piece of design, but when the car’s ignition is powered up, it flips over to reveal the gear selector.

The GV60 will be the company’s second electric model on sale in Europe, closely following the G80 Electrified into showrooms. The car will be Genesis’ smallest offering in the UK market, following the G70 Shooting Brake, G70, G80 saloon, GV70 and GV80 SUV.

What does the new Genesis GV60 have to beat? Check out our list of the best electric cars on sale now…