Volkswagen has been tipped to spice up its ID.3 EV with a performance version that will become the brand’s first all-electric hot hatchback. And now, we know when it’ll arrive.

Speaking at the launch of the new ID.5 SUV in Austria, Volkswagen product line spokesperson Martin Hube noted that the ID.3 GTX’s entry to the range will coincide with the ID.3’s mid-life facelift. “Of course the project is progressing,” he said, adding, “[For the] ID.3 facelift…we will get some very interesting details and of course, we are convinced that customer’s expectations for a bit more power, for all-wheel drive is there, and [the] customer’s wish is what we have to fulfil.”

This means the ID.3 GTX won’t be launched this year – we’re not expecting a facelifted ID.3 until 2023 at the earliest.

The German firm’s GTX branding signifies its all-electric performance vehicles, and the ID.3 GTX is set to be the third model in the line-up.

Speaking to Auto Express at the Munich Motor Show in 2021, Brandstatter said, “The decision is made. We have the ID.4 GTX and the ID.3 GTX will come.”

Brandstatter also outlined that the new GTX hot hatch won’t be quite as powerful as the ID.X concept, which used a 329bhp dual-electric motor set-up fed by a 77kWh (usable) battery. It’s therefore more likely that the ID.3 GTX will use the same twin-motor powertrain as the ID.4 GTX, producing 295bhp. In the smaller, lighter ID.3, the GTX will likely undercut the ID.4 GTX’s 6.2-second 0-62mph time. 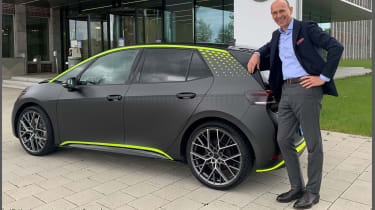 “The ID.X concept was to show what’s possible,” Brandstatter said. “We had the MEB toolbox in the beginning, we added all-wheel drive with the GTX. We will add a performance engine on the rear axle [of the ID.3] to give the car more acceleration, more speed. We are preparing an ID.3 GTX; it will come to life.”

He also confirmed that fun-to-drive enthusiast cars still have a role in VW’s digital, autonomous future: “They are part of mobility,” he said. “On one hand you want to get rid of long distances doing the steering, but on the other hand you want to drive. The electric punch is so amazing that this will also give value to our customers who want to experience that.”

Brandstatter also hinted that VW’s performance-focused electric future could go beyond the GTX tag, with R playing a part in the brand’s all-electric enthusiast offering.

Further to Brandstatter’s reveal of the ID.X concept online, the VW boss also previously released images of an ID.3 Cabriolet on his linkedin page, fueling speculation that an open-top variant of the MEB-based model could make production.

Speaking on the open-top ID. model, Brandstatter said, “A decision has not yet been made, but we are creating the concept.” When asked if he would like to see the car made from his own personal point of view, Brandstatter replied, “I love to have a cabriolet. I drove an electric cabriolet concept and it’s so cool to go outside with nature but you hear nothing – only the wind, the acceleration and you. That’s a completely different feeling, it’s really nice.”

Check out the best electric SUVs to buy right now…