The BMW X3 used to sit in a class of its own, but almost two decades after the original car was launched, a number of quality rivals have arrived to muscle in on the action. Fortunately for BMW the company has responded well to the competition, with the latest version of the X3 improving refinement, ride quality and style. Cutting-edge technology marks it out as one of the best in the business in this area, too.

The latest X3 is practical and spacious, although some people will be disappointed by the lack of a seven-seat option to cater for larger families. There is, at least, a plug-in hybrid option to consider now alongside the petrol and diesel versions of the car not to mention the pure-electric iX3.

The BMW X3 was one of the first compact premium SUVs out of the blocks, but the third generation car (which uses BMW’s internal code of G01) now has a tough fight on its hands. That’s because it’s on sale in a market that has changed beyond recognition from when the original model was launched in 2003.

In the intervening years, many rivals have been introduced to challenge the X3’s position, including the German trio of the Audi Q5, Mercedes GLC and Porsche Macan, while the Jaguar F-Pace, Land Rover Discovery Sport and Range Rover Velar offer up competition from the UK. Other interesting alternatives include the Alfa Romeo Stelvio, Lexus NX and the highly-regarded Volvo XC60. Thankfully, the latest X3, introduced at the end of 2017, has stepped up its game and is still a strong contender in the class.

The X3 gets a look that’s an evolution of what’s gone before, but under the skin it’s all-new, with running gear borrowed from the BMW 5 Series. All versions come with xDrive four-wheel drive as standard, save for the M40i and M40d models. There’s no manual gearbox option either, only an eight-speed automatic.

A facelift in 2021 brought in a sharper, sportier exterior look, while BMW added its latest on-board tech, enhanced cabin materials and 48-volt mild-hybrid systems across its engine range.

The range comprises xDrive20i, xDrive20d, xDrive30e plug-in hybrid, xDrive30d, M40i and M40d engines. Beyond that BMW also offers the iX3 model as part of its ‘i’ electric car range. The numbers in the model names generally relate to engine size, which means that 20i and 20d models get a 2.0-litre, four-cylinder petrol and diesel respectively, while the 30d gets a 3.0-litre straight-six diesel. Just to confuse things, the M40 models also get 3.0-litre straight-sixes, but with larger power outputs, while the 30e plug-in hybrid uses the 2.0-litre, four-cylinder engine paired with an electric motor.

The entry SE specification is no longer available, which means prices for the X3 start from around £44,000.  Buyers have the choice of either the xLine or M Sport trims, with the former including 19-inch alloy wheels, front heated sports seats and BMW’s Live Cockpit Professional which comprises two 12.3-inch screens covering on-board media and driver information. 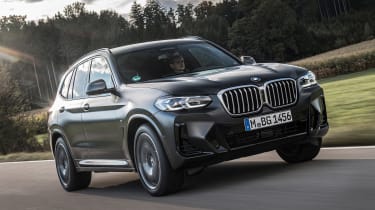 At the top of the range, the 355bhp M40i and 335bhp M40d are standalone models and feature larger 21-inch alloys, black exterior trim, electrically-adjustable front seats with memory function and M adaptive suspension and M Sport brakes. If these models aren’t powerful enough, you might want to check out the 503bhp X3 M, although be prepared to pay for it as it starts at over £86,000.

Overall, the X3 is still a strong contender in the compact premium SUV class, thanks to its efficient yet powerful engines, spacious interior and involving driving experience – just be careful not to get too carried away with the tempting list of options.

The history of the BMW X3 dates back to 2004, when it was at the time one of only a few premium SUVs on the market. In total, three generations of BMW X3 have been produced to date, with each bringing to the table updated technologies and revised engine line-ups, although all generations of BMW X3 have a common trait of being sporty and fun to drive for such a big and tall car.

The BMW X3 Mk3 didn’t mess around too much with the successful formula of its predecessors. The engaging handling made it one of the best SUVs in its class to drive, and the interior was well built and quite roomy. Not everything about the X3 Mk3 was iterative, though, and this was especially the case in the powertrain department: there were petrols, diesels, plug-in hybrids and even a fully electric option called the iX3.

When BMW launched the second-generation, it rectified some of the faults that held back its predecessor. For instance, while the first-gen X3 was cramped inside, the X3 Mk2 was noticeably roomier and more practical. In other areas, things remained quite familiar: the engaging handling meant it was good to drive and, just like the previous model, the only engines available on the X3 Mk2 were diesels. Read our full Mk2 BMW X3 buyer’s guide here…

The X3 Mk1 was BMW’s first SUV after the inaugural larger X5, and had many of the qualities of its bigger brother. This was especially the case in the handling department, as the first-generation X3 was more fun to drive than most other SUVs at the time. Buyers after a more cosseting experience may have been disappointed in the X3 Mk1’s firm ride, though, and practicality wasn’t especially good.

For an alternative review of the BMW X3, visit our sister site carbuyer.co.uk…