Do you know where your car is now? A tracking device isn’t just something you might need if your car is stolen. They can help you locate it in a large car park or maze of side streets, keep an eye on it if someone else is driving, or just help track on the miles you are travelling for business expenses claims.

Some insurance companies insist on having a tracking device fitted to your car before they will cover you for theft, but these will need installing by a professional and can cost hundreds. In this test we have concentrated on devices that can be fitted by a DIY motorist to give a basic level of tracking.

All models, except the Apple AirTag, use mobile data networks to send data to your smartphone and an app to show your car’s location, along with other useful information. Let’s see which tracker was the most useful.

The devices were installed in accordance with the instructions provided and the car was driven to various locations to see how accurately the trackers plotted our journey. We stopped to see if the apps were able to find us in a variety of locations, including in the country, in the city and in an underground car park. We also rated them on accuracy, price and extra features offered.

We really like the simplicity and value for money of the Amacam. It might not offer the ultimate in security, because it can easily be disconnected once it has been found. But for other tracking tasks it works brilliantly and is cheap to run, with the flexibility of using your own SIM.

If security is your top priority, then we liked the extra features – and portability – that the ProacTrac Battery offered.

Vodafone’s Curve has the slickest app, is cheap to buy and run, plus can also be used to track your keys, pets or even a bag. It needs a longer battery life for effective use in a car, but is still great for occasional use.

Tracking doesn’t get much simpler than with the AM-T22. Our previous best buy simply slots into your car’s OBD data port, which allows it not only to draw power but also to know when the engine is running. Unlike some other OBD-based devices we’ve tried, it is tiny, and only protrudes 17mm from the socket. This will be essential in cars where the space around the slot is tight. The app is free to use and you simply choose your own SIM card and slot it into the device. Despite using obsolete 2G mobile data, the AM-T22 never struggled to accurately locate our test car.

The ProacTrac has some clever features that make up for its high price. It attaches magnetically, so it can easily be moved from vehicle to vehicle, and also used on trailers and the like because it is self-powered. It also becomes a sophisticated security device, with an incredibly sensitive ‘tamper’ alarm that detects anyone attempting to open a door on the car and sends an alert to your smartphone to warn you. The battery is claimed to last up to three years, but we think it would be closer to a few months in normal use. 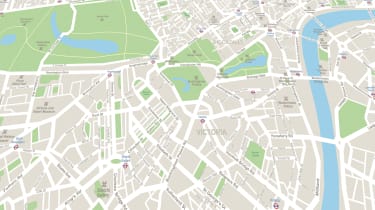 The Curve isn’t a dedicated car tracker and is actually just about small enough to serve as a locator for lost keys. It uses a built-in SIM connected to the Vodafone network and a very slick app to track accurately. The user can choose from different settings that can update every few seconds or every hour, depending how long you want to stretch the battery life. In Power Save mode it will need a charge every week, but using real-time tracking, it will only last a few hours. Despite this, it’s good value, reliable and easy to use.

The wired version of our Recommended ProacTrac is designed for permanent installation and can be DIY-fitted if you are brave. Besides meaning it’s discreet and won’t need recharging, it has an extra security feature: you can remotely cut off the ignition or fuel supply using the smartphone app to immobilise the car. It works really well, with the same ultra-sensitive vibration alerts and uncanny location accuracy as the wired model. But at this price, we’d be tempted to have a professionally installed device with insurance approval benefits.

We really liked the simplicity and accuracy of the iTrack. Just connect the two power cables to the vehicle’s battery terminals and the FS100 will instantly connect to the mobile network and begin uploading tracking data. It’s unerringly accurate, too, and if the power is disconnected, the FS100 also has an internal back-up battery. Our only reservation is the price. The iTrack appears to be identical to a Rewire DB2 product we tried in the last tracker test. That unit costs £34.99 to buy, although the monthly subscriptions are slightly higher.

Apple’s tiny tracking device doesn’t use a mobile phone network like its rivals in this test.  instead the Air Tag relies on the huge number of iPhone users to do its locating. The battery lasts for more than 12 months and the unit is tiny, too, making it easy to hide on a car and  difficult for a thief to find, even using a blocker and locator device. It’s very clever, cheap to buy and run, and works well as a locator in crowded areas, but is better as a back-up or key finder than a tracker you rely on for instant and accurate locating of a vehicle.

The Streetwize tracker was good enough to be recommended in our test two years ago, and while it still works well it is looking behind the times now. We were still impressed by the flexibility of being able to choose your own SIM and the battery life is good enough, but the tracking method feels cumbersome and unsophisticated compared with the other devices here. It’s also restricted to the obsolete 2G network. While compact, it is bigger than the Vodafone Curve, which is cheaper to buy and run on any monthly SIM subscription we could find.