If you want a stylish and refined coupe with four seats, the Audi A5 has been one of the go-to options since its launch in the noughties. While it’s a handsome and desirable machine, it’s not one of the most thrilling to drive. Combine that with the less than dramatic design, and the A5 Coupe faces stiff competition from its two primary rivals the BMW 4 Series and Mercedes C-Class Coupe.

The cabin is beautifully fitted-out, however, using the finest materials and the latest infotainment installations give the car and impressively technological feel. There’s a good range of trim levels that are all very well equipped, and with a bunch of petrol and diesel engines that are efficient as well as strong performers, the A5 is still a force to be reckoned with.

As the coupe spin-off of the A4 executive saloon, the Audi A5 is a spiritual successor to the Audi Coupe of the 1980s. It offers sporty looks, but unlike the smaller TT, there’s usable space for four inside. The original two-door A5 Coupe was launched in 2007, and remained on sale for nine years, which is a remarkably long time for a modern production model. It was joined by the A5 Cabriolet in 2009, while the five-door A5 Sportback also arrived in the same year.

All three were based on the same MLB platform as the A4 saloon, while the Mk2 arrived in 2016, based on the latest variant of MLB, which is designed to offer a sportier drive than its predecessor. Like the Mk1, the second generation is offered in two-door coupe and cabriolet forms, as well as the five-door Sportback. Sportier S5 and RS 5 models are also offered in both Coupe and Sportback body styles. A minor facelift in 2019 brought mildly tweaked headlamps and a refreshed grille to bring the A5 into line with the A4 family.

Audi offers a range of petrol and diesel engines in the A5. All petrol engines in the standard range are turbocharged four-cylinder units, badged 35 TFSI, 40 TFSI and 45 TFSI and coming with 148bhp, 201bhp and 261bhp respectively. There are two diesels, each with four cylinders – the 161bhp 35 TDI and the 201bhp 40 TDI – which comes with a choice of front or four-wheel drive. All models come with a seven-speed automatic gearbox as standard, and quattro four-wheel drive is standard on the 45 TFSI and 40 TDI models. 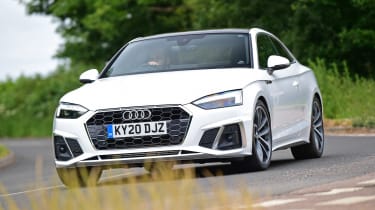 The sportier S5 model is powered by the 2.9-litre, 342bhp S5 TDI V6 diesel, which is mated to an eight-speed automatic gearbox and quattro four-wheel drive, while the flagship RS 5 has a 444bhp 2.9 TFSI V6 petrol engine and is cloaked in a unique body to help mark the model out from the rest of the range. Both performance A5 models are currently offered in Coupe and Sportback body styles.

The Audi A5 is essentially a coupe version of the A4 four-door saloon. On the plus side, it’s a practical coupe with a quality feel throughout. On the flip side, it feels like an A4 behind the wheel, while the styling isn’t as striking as other premium coupes.

The current Audi A5 remains a strong option if you’re after a stylish and refined coupe with four seats. It’s been around for a while, so it’s possibly beginning to look its age, although a 2019 facelift helped to keep things fresh. Keen drivers will perhaps be better served by the BMW 4 Series, while the cachet of the Mercedes brand will be hard to resist for some.

When Audi launched its first coupe in 1969, it sold more than 30,000 examples during a seven-year run. The 100 Coupe S was stylish and expensive, despite having only a 115bhp 1.9-litre petrol engine. When the A5 arrived in 2007, Audi expected to achieve rather more in terms of sales success with a car that was offered with an array of excellent petrol and diesel engines, some superb transmissions and the sort of tech and build quality that Audi buyers have come to expect. Later, there would be a cabriolet as well as a five-door Sportback. Read our full Mk1 Audi A5 buyer’s guide here…