Although the Mk3 Mazda 3 has been obsolete for a few years, there’s plenty to like about it – and this is a car that we loved when it was new. We ran a 2.0 Skyactiv-G 120 model on our fleet for a year and clocked up almost 32,000 miles in that time. The verdict? A brilliant all-rounder that was frugal, a joy to drive, comfortable and eminently practical. No wonder the Mazda 3 saw off the Hyundai i30 in a twin test, and the Volkswagen Jetta was also beaten by a Mazda 3 fastback in another test. Every time we reviewed a Mazda 3 we were impressed, whether it was the entry-level 1.5 Skyactiv-G or the hotter 2.2 diesel – and we reckon that you’ll love the Mazda 3 too.

Compared with many of its rivals, Mazda is a relative newcomer to car manufacturing. It didn’t produce its first passenger car until 1960, but since then the company has built a reputation for making high-quality cars that are reliable and great to drive, plus they tend to look great, too.

All of this is true of the Mazda 3, and although the small family car segment is hotly contested, the Mazda manages to stand out from its rivals in many ways. Entry-level models feature a rather ordinary cabin, but posher editions feel much more premium. Whatever you buy, you’ll revel in the brilliant driving experience, impressive reliability and low running costs. And while the Mazda 3 was costly when new, prices are much keener on the used market.

A 1.5-litre diesel engine joined the range in May 2016, then in October 2017 a revised Mazda 3 went on sale, with styling tweaks, updated suspension, improved refinement, better connectivity and optional adaptive LED headlights. From April 2018 there was another Sport Black limited edition, with blue, red or white paint, 18-inch alloys and extra equipment including a heated steering wheel, navigation and a Bose hi-fi.

The smaller engines have to be worked hard to make progress, but they’re free-revving and enjoyable to use. The 2.2-litre diesel engine offers a fabulous blend of economy and performance, with even early cars Euro 6-compliant, so you won’t be charged to enter any current Clean Air Zones.

The entry-level SE is well equipped, with 16-inch alloy wheels, air-con, a seven-inch touchscreen, multifunction steering wheel, Bluetooth, and powered windows all round. Opting for SE Nav brings navigation, too.

The Mazda’s toughest adversary is the Volkswagen Golf, which features a very wide model range with some excellent engines. It also has a superb interior, and is good to drive. The SEAT Leon is closely related to the Golf and while it looks sharper, it’s more affordable. It’s also plentiful, equally practical and just as capable dynamically.

Another pair that are closely related are the Kia Ceed and Hyundai i30, which are reliable, well equipped and excellent value, while the Ford Focus is extremely likeable thanks to its ready availability, brilliant dynamics and impressive value. The Vauxhall Astra is also in plentiful supply and great value – traits it shares with the Peugeot 308, as well as the slightly bigger Skoda Octavia and Honda Civic.

The earliest Mazda 3s are getting old, but they still have standard hill hold assist, speed limiter and auto emergency braking. 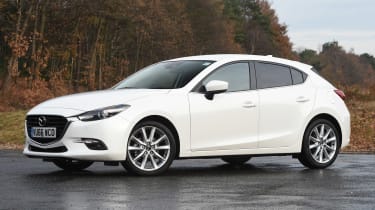 The first Mazda 3 was codenamed BK. The second was the BL and the Mk3 was known as the BM, or BN for facelifted cars (from 2016).

The 3 didn’t come with a spare wheel, but you can buy a space saver. You’ll also need a foam mould to make it fit under the boot floor.

Reliability is generally excellent. Most problems stem from poor maintenance, but diesel particulate filters can clog up on cars used only for short trips.

Mazda has a strong reputation for reliability and the 3 is no exception. We have seen the odd report of minor glitches with the infotainment system and sat-nav, but generally all is well as long as any necessary recall work has been done.

There’s a lot to like about the Mazda 3’s interior, because the dashboard is really well designed, so it’s both interesting to look at and user-friendly, while the quality is excellent. Although the saloon is 12cm longer than the hatch, cabin space is exactly the same because the extra length is all behind the back wheels. Every seat is comfortable and supportive, with lots of legroom in the back.

Boot space in the hatch is also rather good at 364 litres (1,263 litres with the back seats down). The fastback has an even more impressive 419-litre boot, but there’s no seat-folding option, which limits overall practicality compared with the hatch.

The maintenance interval for all Mazda 3s, whether they’re fitted with a petrol engine or a diesel, is 12,500 miles or 12 months. Services alternate between minor and major, which are priced at £180-£220 (depending on which engine is fitted) and £276 respectively.

However, a really big service is required every six years, priced at £465; it’s when the spark plugs are changed as well as all of the fluids and filters. The brake fluid needs to be replaced every two years and this is accounted for in the standard service costs, but if it’s done on its own, you can expect to pay £40. All Mazda 3 engines are chain-driven, so there are no cambelts to replace, but the coolant should be renewed every 10 years or 125,000 miles. The cost of this is included within the general maintenance, however.