The PSE is a great example of a car that makes more sense with time, as I’ve been preaching to my friends and family. They almost unanimously like everything but the price. But times are changing, and so is Peugeot. The more I live with it, the more I’m convinced that the PSE is the right product for the firm at the right time.

Peugeot’s push to go premium is working. The more time I spend living with this 508 SW Peugeot Sport Engineered, the more I’m convinced of that – and it’s not just me, either.

I’ve given friends and family members rides in the car, both short trips and long journeys, and they’ve all initially remarked on the 508’s styling. First impressions count, and on that front the PSE, with its sporty accoutrements, does well. Deep bumpers, big wheels, smart badging and a sleek rear, with a sporty spoiler and diffuser element in the rear bumper, complete with aero flicks, means this looks every inch the rival for premium fast German wagons.

Its Selenium Grey paintwork also helps: it’s a very modern, fashionable colour. Then those I’m driving get in and remark on the eye-catching but not intrusive bright green stitching, the tech and the quality of the materials. The seats are comfortable, and many front passengers are wowed when I say the PSE has massaging seats as standard.

When we move off in absolute silence they’re impressed with the refinement thanks to the plug-in powertrain, chatting away about how quiet it is; and when I can make an overtake or use the performance, the 355bhp on offer shuts them up again.

On more than one occasion when I’ve covered the badge on the steering wheel, my friends and family, who are less well automotively educated, have guessed this is either an Audi, a BMW or a Mercedes. Of course, they’re all wrong. When I tell them – if they haven’t already worked it out – that it’s a Peugeot they’re pleasantly surprised.

Older individuals remember Peugeots of old catering for motoring for the masses. These were mostly good to drive, with a great performance icon or two thrown into the mix, usually wearing a GTi badge. The PSE moniker now replaces this.

Then comes the killer question: how much does it cost? And here’s where Peugeot’s premium push might come just a little bit unstuck – according to my empirical evidence, at least.

When the inevitable game of ‘Guess the price’ starts and I remind them of the power, the performance, the plug-in hybrid tech, the level of standard kit and the fact that, seemingly, many modern cars are on the pricey side these days, most people’s answers reluctantly start with a ‘four’. “Wrong”, I say, doing my best Bruce Forsyth impression: “Higher”. Edging through the 40 thousands, quite a few are shocked when I tell them the 508 PSE’s price tag starts with a five. But when we rest at £56,465 for this admittedly slightly pricier but wholly more practical SW estate model, everyone is flabbergasted.

While the majority of UK buyers purchase using finance, even with a £5,405 deposit on a four-year contract limited to just 6,000 miles a year, Peugeot’s representative PCP example still comes in at £771 a month.

Personally, I actually think Peugeot can just about cut it, but it’s only time with the PSE that’s helped me get to that conclusion.

I could see why you’d initially not think the same. But Rome wasn’t built in a day, and this French manufacturer’s premium legacy won’t be, either. Take a look at Audi; 30 years ago it might not have been considered a particularly premium brand. Over the past 20 years

it’s accelerated rapidly into that space, dominating sales. Peugeot is moving in the right direction and it is products such as the 508 PSE that will help change people’s perceptions of the brand (Skoda is another good example on that front).

I’ve certainly found this out over the past four months. Every time I get into the PSE it does pretty much everything I want it to do with the minimum of fuss, with the exception of the occasionally slow and frustrating infotainment. In my book, that mostly makes it a great car to live with.

When you assess it like that, does it matter what badge adorns the bonnet, and shouldn’t it come down more to what a car offers and how it feels? Judged by these criteria over my time with it so far, the 508 PSE is a success in my book. Just maybe not yet for my friends and family, it seems. 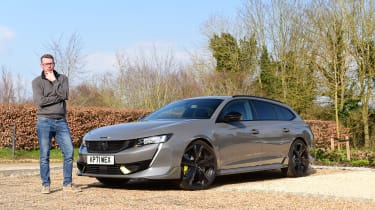 Once, if you wanted a fast Peugeot, it would have been powered solely by petrol and relatively affordable. Plus – given that it probably had a GTi badge on its boot – you knew that, in the most part, it would ride and handle well. Peugeot made a return to form recently with its 208 and 308 GTi hot hatchbacks, which makes it all the more interesting that it’s confined ‘GTi’ to the history books – and I for one am sad at that.

However, I didn’t shed a tear for long, because the future is bright. It’s acid green, in fact, because the accents on this sleek 508 SW estate signify its halo status as a Peugeot Sport Engineered model – the French brand’s new tag for its fast offerings.

And green is appropriate, because the PSE is a plug-in hybrid, with the company using electrification to deliver performance, but with less of an impact on the environment as a result – or so the theory goes.

In the coming months, then, that’s what we’re aiming to find out: whether this 508 SW Peugeot Sport Engineered, to give it its full name, delivers not only on the brief as a performance Peugeot for the modern era and the brave new world of electrification, but also on its £55,830 price tag. Of course, you’re paying for a combustion engine, a battery and electric motor, but the fact is, a figure as high as that puts it in the same pool as BMW’s M340i xDrive Touring and Audi’s S4 Avant, turbocharged six-cylinder petrol and diesel models respectively, with genuine premium appeal and heritage.

But this 508 PSE is also representative of Peugeot’s rebrand to push upmarket, so it’s not just on performance that it needs to deliver, it also has to offer high quality.

Having done more than a thousand miles in the car since I took delivery last month, I’ve actually come away impressed. PSE, GTI, it doesn’t matter really, as long as the car delivers what you want it to. And while the 508’s internal-combustion engine isn’t an all-time great, it’s punchy enough and is supplemented by a hefty boost from its electric motor that makes this the most powerful Peugeot model ever to go into production. With 355bhp and a total of 520Nm on tap, it’s strong – when you’ve got the electrical assistance.

The 0-62mph sprint takes 5.2 seconds, and I get around 20 miles from a charge in the current wintry conditions. But when the battery is depleted, the petrol engine has to work that bit harder to carry the hybrid system’s extra mass around, and it starts to sound a bit coarse.

Even when the battery is nearly depleted, the first few yards as you pull away are often done on electric power. But then the petrol engine cuts in and the transmission struggles to smooth out the switch between power sources, with a laboured pause as it shuffles the two methods around.

At least the steering is sweet (one of the nicest set-ups in any modern hot Peugeot) and the ride acceptable, despite the chunky  alloys. Big bumps do cause thumps, but otherwise it’s relatively controlled.

But what about the things you only find out by living with a car? Well, while I love the styling (bar the fake carbon fibre) and think it looks every inch the competitor to the Germans, the sleek, low roofline and high sills mean getting into the back is a little tight; a few people have now not only remarked on it, but also banged their heads.

Other practical considerations have materialised, too. I’m still not sold on the Peugeot i-Cockpit set-up, but it’s the location of the USB points and wireless charging pad that’s more annoying. You need an extra joint in your wrist to access them.

At least Peugeot has given some thought to life with a PHEV; a storage area for the charging cable under the boot floor stops the load space from getting cluttered up.

I like the massaging seats too. They’re comfortable, but having that functionality helps on a long journey. However, a few longer trips recently mean I’ve not charged up as much as I’d like, relying on petrol power alone. I’m still averaging more than 40mpg though, which is good. Hopefully in the next few weeks more local journeys will give us a chance to maximise this plug-in’s efficiency potential. We shall see.