An electric car chargepoint designed to meet draft proposals for the long-awaited Government-backed accessibility standard, drawn up by the British Standards Institute (BSI), has been condemned by disabled users during an Auto Express test.

We have been leading the campaign to highlight electric car accessibility issues, and charging problems are one reason why EVs are off-limits to many disabled people. As with many drivers, we were eagerly anticipating the Government-backed Publicly Available Specification (PAS 1899) for chargepoints, which was published in draft form by the BSI in April for consultation. Although compliance with the PAS will be voluntary, the DfT and the chargepoint industry have long promised it will be a lever for meaningful change.

Towards the end of April, charging provider Osprey unveiled its vision of a new ‘accessible charging bay’ at the Fully Charged EV show. A spokesperson confirmed the chargepoint featured within the bay would be compliant with the new draft guidance, so we visited a rapid charging site in Banbury, Oxon, where similar examples of the same chargepoint have already been installed, and asked shoppers with mobility issues to try it out.

Our three volunteers used walking sticks, not wheelchairs, yet all faced problems attempting to lift and connect the heavy rapid-charge cables and plug, even when our test car was parked with its charging socket at the closest possible point to the charger. Two of our testers declined the invitation to try and extend the cable the few metres to the rear of the car, stating that they would simply find it impossible.

The fundamental problem the BSI guidance overlooks is the weight and limited manoeuvrability of rapid charging cables, and the significant strength and dexterity required to orientate the plug with the socket. Even when supported at one end, as per the BSI guidance, we measured the weight at around 7kg for an extended cable. When lifted close to the charger, it weighed around 5kg.

Driver Sarah Webb, who relies on a Motability-supplied Hyundai Tucson, told us she’s enthusiastic about the green benefits of EVs, and is open to driving one.

“Wow,” she said, after struggling with the cable. “If that was the only charging option, I’d have to stay at home. The car is my freedom, and that’s a horrible thought.”

Auto Express has responded to the PAS 1899 draft consultation, demanding that maximum weight limits be included within the scope of the standard.

We say that chargepoints must not be deemed ‘accessible’ if users can’t lift or orientate cables, and that maximum weight limits must be agreed with disabled groups.

If the chargepoint industry cannot meet acceptable weight restrictions for cables fitted to rapid charging equipment, the government or charging service providers must look towards the approach taken at filling stations where attendants are available to meet the needs of disabled drivers who need help with petrol or diesel pumps.

Our response to the BSI’s consultation states:

“We don’t believe it is acceptable, responsible or even honest to launch any kind of formal accessibility standard that takes no account of the weight and manoeuvrability of charging cables, and the scope of the standard must be widened to cover this fundamental issue.

“PAS 1899 as currently drafted is terrific news for infrastructure designers and installers who can say ‘we meet officially approved standards’, but it is of no use whatever to a driver who arrives at a charging site and is unable to lift the cable and plug it into their car. 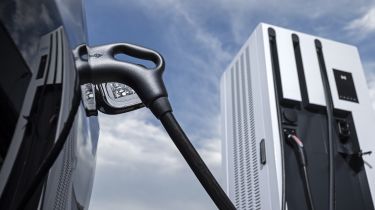 “PAS 1899 as it stands will leave disabled people wondering who the accessibility standard has been drawn up for; disabled drivers, or an industry or government looking to sweep their issues under the carpet.”

The BSI’s PAS 1899 draft stipulates that accessible chargepoints should use cables suspended at one end to help manage weight and prevent trip hazards, but it doesn’t address maximum allowable cable weight. However, a covering letter to the consultation shows the BSI is aware of the issues:

Background research for PAS 1899 and Steering Group discussions did not identify any specific values that could be used, and as such current wording in clauses related to cable weight/cable management systems focuses on principles rather than measurable values,” the letter states.

“In the absence of specific measurable information, OZEV and Motability are discussing the possibility of establishing a technical working group to address the accessibility of cable weights, cable management systems and cable lengths, based on different types of public chargepoints,” the BSI says.

However with that consultation and process yet to be confirmed, the danger is that publishing PAS 1899 in its current form will leave installers free to state chargepoints do meet the approved standard, knowing they will be unusable by many drivers.

Chargepoint installer Osprey’s ‘accessible charging bay’, revealed at the end of April at the Fully Charged Show, features the Kempower design we tried out at Banbury.

Its bulky six-metre cable is partly supported by the charger’s overhead arm, which is said to take much of the weight, but one of our Banbury testers tried the charger at the show to confirm it was similarly problematic. Osprey told us that it’s on the board of the team responsible for drafting the PAS, while the company website states: “Through working with UK charity Motability and taking on customer feedback, we have built a thorough understanding of the key requirements that need to be addressed in all public charging site design, including: space, kerbs, screen and handle height, payment ease, cables and the general overall usability of a charger.”

Opinion: ‘Work is needed to make electric cars accessible for everyone’