Apple CarPlay: review, user guide and everything you need to know

These days it seems like we use our smartphones for everything and if you own an iPhone and want to connect it to your in-car entertainment system, one of the most popular ways is by using Apple CarPlay. Many new cars come with the technology, but how do you use Apple CarPlay and what exactly is it?

Apple CarPlay is Apple’s factory-developed software which is specifically designed for use with your iPhone through your car’s infotainment screen. While many cars come with their own operating systems that work with your smartphone, there is a growing list of Apple CarPlay compatible cars which offer a cleaner, more intuitive hands-free user experience for iPhone owners.

By creating its own user interface for iPhones in cars, Apple aims to give users the best possible experience controlling their phone’s features safely through a compatible car’s steering wheel controls, touchscreen or voice recognition system. Some models even allow wireless Apple CarPlay functionality so you don’t need a cable cluttering the car’s cabin.

Aside from the ability to make phone calls, send messages and look up contacts, CarPlay also allows you to access your Apple Music playlists and a host of other third party music apps such as Spotify and Amazon Music, or navigation apps such as Waze or TomTom. You won’t be able to access every type of app, though. Only apps that are deemed safe to use while driving can be accessed, so games are off limits.

If you’re an Android phone user you won’t be able to use Apple CarPlay with your device, but we’ve got a separate guide to Android Auto that’s worth checking out. It’s the rival system developed by Google that allows Android smartphone users to do much the same sort of thing. Asking which is better in the great Carplay/Android debate is a bit like choosing between BMW or Mercedes. They’re both great, just a bit different, and whichever phone system you prefer will determine whether Carplay or Android Auto is best for you.

Today, the majority of car makers offer Apple CarPlay – as well as Android Auto for non-Apple smartphones – either as standard or as an option on their cars – some makers have even started to forego offering hard-wired sat-nav systems in favour of CarPlay installations.

The main benefit of this is that the apps used with CarPlay are constantly updated so that the latest features are included. This is especially true of Apple Maps, the firm’s mapping app. Rather than having map data loaded on the iPhone or iPad, the maps are online, just like Google Maps, and that means they’re accurate and up-to-date whenever you use them. In comparison, built-in nav systems can only really be updated come service time, and usually for a hefty fee.

The latest version of Apple CarPlay iOS 15 allows you to unlock and even start some car models with your iPhone. This clever feature also allows you to lend contacts a virtual key, so you can grant friends and family access to your car even if you’re not there to physically hand anything over. The technology also prevents the car from locking if you’ve left your iPhone inside. Not all cars are compatible with this feature but many of the most recent cars are – BMW was one of the first to offer it.

Another new feature to be included is ‘Focus Mode’. This mode makes sure only important notifications are displayed on your car’s infotainment screen when using Apple CarPlay, helping to stop any unwanted distractions. This can be configured for a wide range of instances, for example when you’re sleeping, working or exercising, but ‘Drive Focus’ can be set to kick in when you connect to your car’s Bluetooth or switched on manually.

The default navigation app ‘Apple Maps’ has been updated to display maps in 3D, allowing for more context when following your route. New details mean that turning lanes, bike lanes and pedestrian crossings can also be displayed, but the immense work that goes into this feature means it’s currently only available in major cities like London.

Another tweak is the ability to have Apple’s voice assistant Siri read out your text messages automatically when you receive them, meaning you no longer have to distract yourself by interacting with the touchscreen to play them out loud. This feature, known as ‘Siri Announce Messages’, can be toggled on in settings.

Using CarPlay is pretty effortless and it connects your iPhone (or iPad/iPod)to your car in an instant – simply plug it into the USB socket (although some car makers are now starting to offer wireless CarPlay connections), follow the brief on-screen instructions asking you to unlock your phone to permit CarPlay to access it, and you’re ready to roll. And you only need to do this once – your iPhone will log the connection you’ve made to CarPlay on your car, so that the next time you connect, it will start working automatically.

When you connect CarPlay, the car’s infotainment screen shows a menu of CarPlay-compatible apps on your iPhone. This includes pre-installed iPhone apps such as the Phone, Music, Maps, Messaging, Audiobooks and Podcasts, while third-party apps such as WhatsApp and radio players can also be accessed via the touchscreen, a car’s multifunction steering wheel or via voice control.

This is far easier to do than trying to use your iPhone while driving, which of course is an offence that’s punishable by a fine and points on your licence, because it’s a major safety risk.

One of the main highlights of CarPlay is its use of Apple Maps. Apple installs the Map app as standard on all iPhone and iPad devices, and as it’s fully CarPlay compatible, it means you can have sat-nav in your car for the fraction of the cost of factory-fitted nav systems. It displays turn-by-turn directions on your car’s infotainment screen, and offers the full range of location search and destination functions that a conventional nav system offers. In fact, some carmakers are already dropping the option of sat-nav on some CarPlay-equipped cars, and it’s likely that built-in sat-nav could become obsolete in a few years. 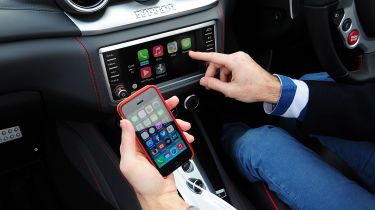 Apple Maps is able to suggest landmarks along a route, show predicted traffic levels and live traffic information when network coverage allows, and can also reroute you if necessary. The only downside to Apple Maps is that it relies on your iPhone’s network coverage and data allowance or a wi-fi connection to update the map data when you’re on the move. That means if you lose your signal for any length of time, you could be left with a dot on the screen representing you and your car, and a blank grid instead of a map of your surroundings.

You can get around this by planning your route while connected to the web before you set off. You can set your destination and Apple Maps will calculate the route and download the map data you need to your iPhone. However, if you miss a turning and go off the planned route, then you’re at the mercy of your network connection as to whether you get the additional map data downloaded to show the new route information.

Not all cars come with voice control, but iPhones are fitted with the Siri voice assistant as standard, and this adds user-friendly touches when used with CarPlay. It works in conjunction with messaging apps and can read out text messages over the car’s speakers. What’s more, you can dictate messages to Siri to send to contacts. The effectiveness of this depends on how refined your car is, because background noise can hamper Siri’s ability to transcribe what you say.

The other downside to messaging is that Siri cannot handle abbreviations, emojis and picture messages. Often it will read everything literally and describe emojis, which can sound a bit odd. You can also use Siri to navigate through your Music library, by selecting playlists, podcast and radio apps.

As time progresses, more and more car makers are embracing CarPlay technology. The first car to use Apple CarPlay was the Ferrari FF, which was revealed at the 2014 Geneva Motor Show. Other makers soon followed suit, and today CarPlay is usually bundled together with Android Auto in a car’s infotainment package. It’s quickly becoming standard kit on new cars, although some manufacturers, such as BMW, took their time in offering the tech at no extra cost to the customer.

If you’re not in the market for a new car, then you can also buy aftermarket navigation/audio head units that are pre-loaded with CarPlay – reputable manufacturers such as Alpine, Sony, JVC, Pioneer and Kenwood all offer compatible head units.

The basic features of the two rival systems are broadly similar, but dedicated iPhone users will prefer the simple and refined CarPlay interface, which mimics the look and feel of an iPhone.

Both rival systems handle navigation and mapping effectively, but many users will be instantly more comfortable with Android Auto’s Google Maps system, as it’s so familiar from their desktops.

While CarPlay supports Apple’s own messaging system, and is now compatible with WhatsApp, Android Auto can handle messages from more apps, including Google Hangouts, KiK and Skype, to name a few.

You’ll probably already own a smartphone when you buy your next car, and that will define your choice of in-car operating system.

In terms of functionality the two systems are very similar, but CarPlay focuses on simple, clean, intuitive user journeys while the Android Auto strength is a more open platform for third-party apps and content, although Apple is opening up CarPlay to be compatible with more third-party apps.

It’s a highly subjective area, but if forced to choose, we’d go for Android Auto with Google Maps and its access to multiple messaging apps.