The latest Vauxhall Corsa is miles better than the car it replaced, offering a much more convincing blend of performance, economy, comfort and driving pleasure. It looks good, boasts one of the best petrol engines in its class and has benefited hugely from the thoroughly modern underpinnings shared with the latest Peugeot 208.

All of the technology on-board is bang up-to-date too, but we can’t help feeling the whole package is a little overpriced; key rivals like the Ford Fiesta and Renault Clio are similarly rounded, but better to drive and cheaper to buy.

The latest Vauxhall Corsa was one of the first new products to arrive in the wake of the British brand’s takeover by the PSA Group. Under the Corsa’s all-new bodywork is a platform that’s shared with the Peugeot 208, along with an all-new petrol engine that’s also shared with the Corsa’s French cousin.

There’s plenty to separate the two closely linked cars, however. Inside and out, the Vauxhall looks and feels unique; sharp, modern lines mean the Corsa looks better than it ever has, while the comfortable interior boasts plenty of good-quality trim and up-to-date tech.

Vauxhall has trimmed the extensive equipment levels previously on offer, although there is still a choice of four specifications, including entry-level Design, sporty GS Line and top-of-the range Ultimate. The Corsa-e all-electric model has a slightly different trim lineup with GS Line and Ultimate. While the range starts at around £17,000, it’s possible to push the price to more than £29,000 for a top-spec electric car.

Petrol-engined options include a 74bhp 1.2-litre, three-cylinder unit, or a 1.2 turbocharged powerplant with either 99bhp or 128bhp. The 99bhp PSA unit won Engine of the Year in 2018 and with good reason; it’s our pick thanks to its balance of surprisingly punchy performance and excellent fuel economy. A 1.5-litre diesel engine was also offered, delivering 101bhp, but it’s no longer available to order.

The Corsa has been completely reworked from the ground up to take on its rivals in what is one of the most hotly contested market segments. Its closest rivals are the excellent Ford Fiesta and Renault Clio, both of which sit at the very top of the class as fantastic all-rounders; other capable rivals include the slightly larger Volkswagen Polo, its SEAT Ibiza relative and, naturally, the Peugeot 208 that shares so much of its mechanicals with the Corsa.

Since its introduction in the UK in 1993 the Vauxhall Corsa has achieved over two million sales, so there should be a ready supply of used or nearly new examples to choose from. It was actually the Vauxhall Nova that was the first supermini to wear the Griffin badge, with the Corsa introduced to appeal to a wider range of buyers. Sporty three-door models are less practical than the family-friendly five-door versions, but if you’re after something racy, then the GSi and VXR variants may appeal.

The 2014 fourth-generation Corsa (Corsa E) was not an all-new car, but a heavily reworked version of the 2006 model (Corsa D). This meant it maintained its roomy, spacious interior and choice of decent petrol and diesel engines. Equipment levels were enhanced with tech such as Apple CarPlay and Android Auto included, while you could also specify luxury items like a heated steering wheel, heated seats and automatic climate control. Read our full Mk4 Corsa buyer’s guide here… 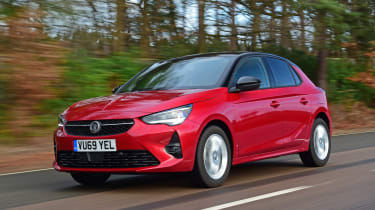 Third-generation, three-door Vauxhall Corsa models were marked out with sportier trim, while the five-door cars offered more space for the family. The 2006 model grew a little in length to just shy of four metres, and Vauxhall introduced its efficient ecoFLEX engine technology with a fuel-saving start/stop system.

With its curvier design, the first Vauxhall Corsa looked altogether more sophisticated and modern than the Nova supermini. It offered more interior space, too, and brought in new tech which helped it compete against the likes of the Ford Fiesta, Volkswagen Polo and Peugeot 205. ABS brakes, front airbags and side-impact protection meant it offered new levels of safety, while the 16v GSi model and turbocharged diesel cars also appealed to buyers.

For an alternative review of the Vauxhall Corsa, visit our sister site carbuyer.co.uk…