Porsche claims that the Macan is “the sports car of the SUV segment”; it’s not exactly an out-and-out sports car, but the Macan certainly is the best-driving SUV on sale today.

Four-wheel drive means there’s lots of grip on offer, so it’s a strong performer regardless of road conditions, while the standard-fit seven-speed PDK dual-clutch automatic gearbox means the Macan is a beautifully relaxed car to drive.

The Macan isn’t quite as large and practical as some rivals, but on the road it’s fast and a lot more fun to drive. Opt for adaptive dampers and the Porsche will offer plenty of comfort, while it has a high-quality feel and offers an exclusive, upmarket image.

After the runaway success of the larger Cayenne, which many pundits reckon is the car that saved Porsche from financial ruin, it was pretty clear the German sportscar firm couldn’t afford not to extend its presence in the SUV sector.

More than a million Cayennes have left the Porsche factory gates since its launch in 1996, but its baby brother the Macan could reach that milestone even faster. The Macan entered production in 2014, and 350,000 had been sold by 2018 when the car was facelifted for the first time. 2021 brought about another mild refresh, and although there’s a brand new electric Macan in the works next year, Porsche has confirmed this existing model will be sold alongside the new Macan EV for as long as enough people want to buy it.

And want to buy it they do, for the simple reason that the Macan is still the best handling and most fun to drive SUV available, which is a pretty remarkable feat after seven years in production. It also benefits from the halo effect of one of the most highly-regarded performance car badges of all time on its nose, notwithstanding the fact that many of Porsche’s more puritanical sports car fans still roll their eyes at the mere idea of a Porsche SUV. Most of the rest of the world has got over that philosophical hurdle, as the sales figures attest.

The Macan swims in a very talented pool, and rivals the Jaguar F-Pace, Range Rover Evoque, BMW X3, Audi Q5,  Alfa Romeo Stelvio Quadrifoglio and Mercedes GLC. Nowadays there’s even a rival from the Spanish arm of the VW Group, in the shape of the Cupra (nee SEAT) Formentor, which as our Auto Express triple test against the Macan and Alfa Stelvio proved, is able to run the Macan pretty close in many respects.

Where the Macan excels is with its driving dynamics. It focuses on sporty handling, but it can still perform as a comfortable family car when necessary. It doesn’t quite have as much space as its rivals, but that’s a price many owners are willing to pay so that they are at the wheel of the best-handling SUV on sale. 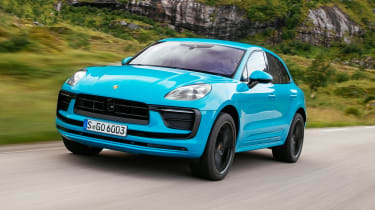 The 2018 update initially saw the range pared back to standard and S models, although a Turbo version arrived soon after. Now there’s a driver-focused GTS variant included in the line-up which replaces the Turbo.

2021 brought about some exterior revisions for the Macan, including a new front bumper and rear diffuser, standard Sport Design door mirrors, Porsche’s LED Dynamic Light System, along with new wheel designs and fresh paint options. Inside the cabin, there are haptic touch surfaces replacing buttons, while a stubbier gear selector also features.

More significantly, power has been increased across the range: the standard Macan and Macan T are now powered by a 261bhp 2.0-litre turbocharged four-cylinder petrol engine (up 19bhp), while the Macan S has a 2.9-litre V6 petrol unit packing 375bhp – a rise of 26bhp. Both cars have a seven-speed PDK auto gearbox and four-wheel drive as standard.

The GTS model, also using a 2.9-litre twin-turbo V6, sees the biggest increase in power and now delivers 59bhp more than previous, at 434bhp. Adaptive dampers, standard on the S, T and GTS, have been reconfigured, while the GTS now benefits from air suspension as standard.

If you’re looking to buy a Porsche Macan, why not visit our sister site buyacar.co.uk for the latest deals…