So what is it, then? The Polestar 2 is a Tesla Model 3 shorn of all the gimmicks, with a luxurious feel and great build quality. I love the understated design and the brilliant way the car’s tech is integrated.

Nice car – what is it? It’s the question I’ve been asked continually since I’ve been running our Polestar 2.

It’s not a particularly unusual enquiry, after all; we’re privileged to drive the very latest new-car launches on a regular basis. But in the case of the Polestar, it’s an easy, yet not especially quick question to answer.

It’s easier to start with what it isn’t. It’s not a posh Volvo, as some have said. A Volvo driver might recognise the odd bit, but the Polestar doesn’t look like a Volvo, there are no Volvo badges anywhere and – unlike with new brand Cupra and SEAT’s relationship – it’s not sold through Volvo dealers.

Our inquisitors usually walk away impressed by the car’s styling, interior, tech and raw numbers, muttering something about Volvo. Which is a shame, because Polestar feels like it’s building something very big and very different from the mainstream. I like that it’s fixed on sustainability, too. But mostly I’m finding driving something slightly enigmatic is good fun. It turns heads for the right reasons, and it’s rare that a compact exec stops passers-by dead in their tracks.

Some people have recognised the name from adverts and magazine reviews, but haven’t joined the dots. Perhaps a badge on the bootlid – the go-to place for anyone wanting to identify the car – would be a quick and easy solution to raise its profile.

Everyone I’ve spoken to ended up leaving impressed with the car’s stats, and after 2,600 miles, these are still impressing me. Chief among them is the car’s 4.7-second 0-62mph time. While the opportunities to unleash that potential to the full are few and far between, it makes overtaking very easy. Equally impressive is the 20 minutes it can take to charge the car’s batteries from 20 to 80 per cent capacity, at 150kW.

Two things to note, though: firstly, I’ve been on quite a few long journeys recently, and it’s clear that hooking up to a 150kW charger doesn’t necessarily mean you’ll get 150kW. That’s assuming you can charge at all, with BP Pulse causing particular headaches lately.

The second is the range. The 2 has a pair of displays, each showing remaining range: on the digital dials you get a solid 250 miles pretty much every time you charge to 100 per cent.

The touchscreen has a more accurate predicted figure, which depending on how the car is driven, can show anything from 250 to 180 miles – but this is hidden when you use any of the apps. With more motorway trips, my economy has fallen from around 3.1 miles per kWh to 2.7, which gives a real-world range of 210 miles. It’s not exceptional, but travel at 65mph rather than at 70mph, and you can stretch the range further. Problematic? Not really. It helps to make journeys just a little bit more relaxing.

While some electric cars can be defined by their range, I’m not sure the Polestar is one of them, because it has such a breadth of talents elsewhere. Its tech is simply superb, easy to use, relevant and responsive, and I’m not missing Apple CarPlay one little bit.

Criticisms? I’d like a little more rear visibility – and, well, that’s about it. Charging infrastructure aside, I’m absolutely loving my time with the Polestar. 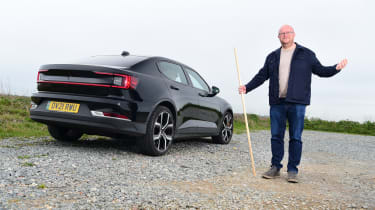 The pandemic may have forced many car manufacturers to do business very differently, but for others, that was always part of the plan. And that’s why I didn’t collect my new Polestar 2 fleet car, but had it delivered, on the back of a truck, directly to my front door. The idea of not having to travel to one of Polestar’s three outlets was appealing, not least because the closest, in London, is two hours away on a good day.

And so, right on time, ‘my’ Void black Polestar 2 Long range Dual motor was reversed onto my drive by one of the firm’s reps, Andre, who was very happy to talk me through the car’s many, many features.

It was all enormously reassuring, but in no time I’d figured out the highly intuitive Google Automotive-based infotainment, located the handle to open the froot (necessary for cable storage) and, following a foot-waggling demonstration from Andre, learned how to operate the hands-free boot.

Sometimes it takes a while to bond with a new car; not so here. I’ll admit to being pretty smitten from the word go. I love the elegant styling, which is mostly discreet, with the exception of the rear lighting graphic, which sweeps just like KITT from Knight Rider – something I’ll not get bored of in a hurry – and the gold Brembo brake calipers, which come as part of the £5,000 Performance Pack. The Polestar badging is always colour-coded, so the firm is taking a low-key approach to branding, even if the stickers on the doors look a little bit ‘development vehicle’ to my eyes.

I love the interior, too. The dash and its trim feel at least as desirable as a BMW or Mercedes, and certainly more traditionally premium than a Tesla. If there is a criticism, it’s the slightly awkward contrast between the comfy beige leather seats (a pricey £4,000 option) and the gold seatbelts, which also form part of the Performance Pack.

The Polestar’s infotainment is brilliant, though. The 11.15-inch touchscreen is fast and responsive, and very easy to use. The main screen allows you to quickly access nav, audio, phone and predicted-range apps, even if a physical ‘home’ button would make things slightly easier still.

It’s all centred on a brilliant integration of Google Maps, which displays how much charge the car will have at your destination, as well as the charge you’ll have when you arrive back home. This level of information is precisely what’s required to accelerate EV adoption: make it easy, and sales will follow.

The 2 has sledgehammer pace. A full-house Model 3 might be quicker than the Polestar’s 4.7-second 0-62mph time, but it’s more than enough. The steering is accurate, and in its sportiest setting, has pleasing heft, too. That theme continues with the suspension and brakes – both upgraded as part of the Performance Pack. The Öhlins suspension can be manually, but not electronically, adjusted. It’s in its mid setting currently, and could probably do with a bit more compliance for my tastes.

The Brembo brakes are large enough to require 20-inch alloys. They offer fearsome bite, but need a strong, decisive press of the pedal to get the best from them. Not that they’re used much in anger, because the most aggressive brake regeneration makes one-pedal driving possible most of the time.