There will be an entry-level ‘Utility Wagon’ two-seat model as well as a £52,000 ‘Station Wagon’ five-seat version.

Ineos will also offer two pre-configured Grenadiers called the ‘Trialmaster’ and the ‘Fieldmaster’, both priced from £59,000. The firm says the Trialmaster has been ‘specified with extreme off-roading in mind’ and the Fieldmaster ‘is designed for those with an adventure lifestyle’. There will be further customisation options within the Grenadier’s ‘Utility belt’ along its flanks.

The Trialmaster Edition gets both the ‘Smooth Pack’ and additional ‘Rough Pack’ as standard. Both packs cost £1,685 on other models but the Fieldmaster gets the Smooth Pack as standard as well.

The French-built, Austrian-engineered and British-conceived new 4×4 – evoking memories of the original Land Rover Defender – should reach customers from the end of this year, with production starting in July 2022. Production will take place at the firm’s Hambach plant, which was bought from Mercedes in 2020.

Customers will be able to order entirely online or face-to-face through 23 retailers, which includes six specialist 4×4 and a couple of agricultural outlets, across the UK. In addition to the retailers, Ineos is promising test drives to customers’ own specifications, while additional servicing needs are set to be taken care of by selected Bosch Service Centres. Ineos promises that customers will never be further than a 45 minute or 45-mile radius from a service centre.

Technical support for modifiers or anyone wanting to work on their own Grenadier will be via direct access to Ineos HQ with interactive online manuals and videos.

Ineos will be operating an agency model with its retailers, rather than a traditional franchise system. That means the contract is between the buyer and Ineos rather than the retailer, with the dealership used for demonstration, delivery and after-sales. Even the part-exchange process is set to be carried out through the manufacturer rather than the dealer.

So far, Ineos has had 18,000 people register an interest in buying a Grenadier globally.

The Grenadier was designed by Toby Ecuyer, who started his career as an architect and recently moved into designing super yachts. It shares the same boxy proportions as the old Defender, with similarly angular doors and window glass. It also shares the Land Rover’s slatted radiator grille, flat bonnet, round headlamps and upright windscreen – and, under the front bumper, there’s a thick sump guard.

Ineous claims the Grenadier has a ground clearance of 264mm and a wading depth of 800mm.

There are some elements of the Mercedes G-Class mixed into the Grenadier’s design, too, which is no surprise considering Ineos’s partnership with the Austrian engineering company, Magna Steyr. The firm has handled the production of the G-Wagen since 2018 and will also help Ineos piece together the Grenadier. 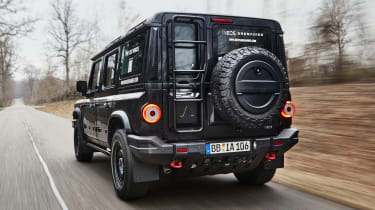 Ineos has sourced two BMW engines to power the Grenadier. Both are 3.0-litre six-cylinder turbo units. There’s a diesel with 246bhp and 550Nm of torque, and a petrol engine with 281bhp and 450Nm. Pricing remains the same for each powertrain. The permanent four-wheel drive with shiftable low range and a central locking diff is Ineos’s own design, but power is transferred via an eight-speed ZF automatic gearbox. There’s also potential for a hydrogen-powered Grenadier, with Ineos hoping to test the technology in its 4×4 this year after a £1.7bn investment.

Inside, the vehicle takes on a rugged approach that mixes practicality and durability with the latest technology and plenty of comfort, the company claims.

Almost every element of the Grenadier has been designed from a clean sheet of paper, including the cabin. With the car’s focus on being easy to operate in the most extreme conditions (e.g. when wearing gloves) – as both a commercial vehicle and a lifestyle off-roader – the Grenadier’s cabin features big buttons and controls that have been inspired by maritime set-ups and heavy machinery, according to Ineos Automotive’s Head of Design, Toby Ecuyer.

The idea behind this approach is to boost ease of use and how logical the layout is; with that in mind every switch is labelled with writing rather than an icon, so it’s obvious what function it operates.

All models will feature the same centre stack of toggle switches and an overhead row of toggle switches on the headlining. This will be home to functions such as the front and rear electronic differential locks, while the centre diff lock is operated manually via a lever on the centre console next to the BMW-sourced gear selector.

Extra panels in the roof are available to control electronic extras such as roof lights or a winch; pre-wiring for these panels and accessories comes fitted as standard, while the Grenadier will also offer an optional 2,000-watt AC power converter to run various different accessories, such as power tools.

Alongside the BMW-sourced powertrains, Ineos Automotive has sourced the infotainment system from the German brand, with the 12.3-inch touchscreen (also controlled through a rotary dial on the transmission tunnel) uses BMW’s operating system. However, the Grenadier’s graphics are bespoke.

Navigation will be through either Apple CarPlay or Android Auto connectivity – a move Ineos claims will help boost usability, integrating with owners’ devices, and stop the tech dating. There’s also an off-road pathfinder function given the Grenadier’s intended use and capability.

The cabin materials are hard-wearing with an element of luxury – touches such as a saddle leather option for the steering wheel add a tactile feel but will also age with the car, “giving it a patina” according to Ecuyer.

Splashproof fabric upholstery is standard for the Recaro-sourced seats, which is treated to repel spillages and stains, while leather will be an option focused more at lifestyle buyers.

Isofix points will also be fitted, while storage inside has been maximised, with a clever use of space to stow anything from phones, wallets and keys. Items needed for lifestyle pursuits can also be stowed in areas such as the cubby within the tailgate-mounted spare wheel’s hub, a lockable centre console and a sliding dry storage area underneath the rear seats.

A rubberised flooring with drain plugs will also be standard, while buyers will be able to spec carpet as an extra. The former boosts the Grenadier’s utility, allowing the car’s footwells to be hosed out. All switchgear inside the cabin is splashproof, too.

It’s all part of the relatively young car company’s promise that the Grenadier – and everything inside it – will stand the test of time, helped by Ineos removing complexity from the car. There are around half the number of ECUs inside the Grenadier next to a comparable vehicle, which means there’s less to go wrong and less to fix if there is a problem.