At this price AMG’s introduction to plug-in hybrids is expensive, but then the performance is also superb. The brand has proved its petrol-electric future is as bright as its pure V8-powered recent past. It’s superbly easy to drive, relaxing, and incredibly rapid, while despite the weight AMG’s engineers have also done a good job to ensure it still offers the level of handling and agility a big, luxury four-door coupe should.

Here’s a little challenge: time how long it takes you to say the name of the new Mercedes-AMG GT 4-Door 63 S E-Performance out loud. If it was more than three seconds, this first plug-in hybrid from the German firm’s AMG division has already sprinted to 62mph from standstill.

That task takes just 2.9 seconds thanks to a powertrain that delivers a thumping 831bhp and 1,400Nm of torque. It’s based on AMG’s familiar 4.0-litre biturbo V8 engine, which is supplemented by an electric motor mounted on the rear axle helping to deliver that colossal output; it’s one of two plug-in hybrid powertrains AMG will offer in the future, the other being an an electrified 2.0-litre four-cylinder turbocharged unit that will power the forthcoming C63. Here, for this electrified AMG flagship, the V8 remains. As does the nine-speed automatic transmission and 4MATIC+ all-wheel drive system.

The electric motor is supplied by a relatively compact 6.1kWh battery, of which only a maximum of 3.4kWh is used to travel solely in e-mode. The rest is saved to augment performance, with the e-motor’s output rated at a maximum of 201bhp and 320Nm for up to 10 seconds, with a total continuous output of 94bhp. It drives through its own two-speed transmission and there’s also an electronically controlled limited-slip differential at the rear.

Its relatively low energy content compared with some plug-in models means the battery only weighs 89kg, but the other components associated with a PHEV means this new E-Performance model tips the scales at a total of 2,380kg. At least the mass is distributed evenly across both axles, with a perfect 50:50 balance.

It also serves to make its acceleration even more impressive, as on the move the E-Performance’s aggression in Race mode is astonishing. Even in conventional V8-powered AMGs there isn’t much turbo lag, but there’s no pause before the 4-Door romps forwards when you apply full throttle thanks to that instant and prodigious shove from the electric motor. As the V8 really gets into its stride and the 1,400Nm wave arrives, it feels rampant.

With numbers like these you’d expect impressive straight-line performance, however. What’s also remarkable is that the electrified GT 63 S’s handling is also surprisingly nimble. It feels agile, defying logic when you think about that kerbweight figure.

There’s supercar tech to help here, with rear-axle steering fitted to improve agility, plus all of the usual adaptive chassis tech you’d expect from a flagship four-door model like this, including AMG Ride Control+ adaptive air suspension and carbon-ceramic brakes.

The systems do a relatively good job of controlling the mass and the power, but as the tyres start to overheat the AMG’s inner character emerges. In the most part grip is good from the Michelin Pilot Sport 4S tyres, but the immense performance means you’re never too far away from a little slide on the exit of a corner. On track the ESC can be turned off altogether and you can indulge in plenty of fun, that rear differential really coming into play.

This is not a track car in reality, but nor has the E-Performance’s plug-in system been designed as a maximum efficiency solution either. In fact, the car can only travel a claimed 7.5 miles in electric mode. Instead, AMG says the battery system is designed for fast power delivery and not extended range. 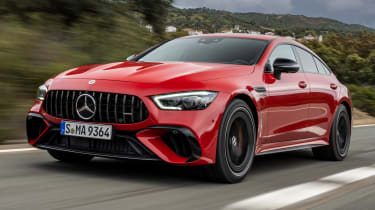 Yet it does help efficiency, with claimed fuel economy of 35.8mpg and CO2 emissions of 180g/km. That still doesn’t mean it will be cheap to run, especially with petrol prices at the moment, while the Porsche Panamera Turbo S-E Hybrid, with its larger battery, has arguably a more impressive and flexible electrified side to its running during everyday driving.

There are still four regenerative braking modes to harvest as much power as possible when slowing down though, topping up the battery in the process. These range from no brake regeneration to a one-pedal driving mode, giving the most retardation from the motor.

Apart from the extra flap that hides the car’s charging port (a 3.7kW on-board charger is fitted for a recharge time of just over one and a half hours) the E-Performance features new ‘externally fluted’ exhausts, which still emit the same great baritone soundtrack. There’s also red accenting for the ’63 S’ badge and E-Performance logos applied to the car’s flanks.

Inside, the car gets Merc’s upgraded steering wheel and cabin packed with tech, including a pair of 12.3-inch screens loaded with connectivity and a centre console with buttons arranged in pairs of four, mimicking the V8’s layout.

Quality is great – and so you’d expect given the car’s £173,655 price tag. A number that’s equally as eye-widening as its power and torque output. But then cutting edge tech and innovation is never cheap, and it’s also the knowledge and the application of the systems that you’re paying for here. Plus the exclusivity.

Read our review of the two-door Mercedes-AMG GT here…