The Audi Q5 is only in its second generation, but it is firmly established as one of the most popular premium SUVs on the market – it’s a very solid rival for the likes of the BMW X3 and Mercedes GLC.

The Q5 shares chassis parts with the larger Q7, as well as the highly regarded Audi A4. It offers a comfortable, refined driving experience, but doesn’t quite match the X3 or Jaguar F-Pace for driver involvement. It compensates for this with a supremely well finished cabin, though, and bags of safety technology and hi-tech equipment, including some of the best infotainment packages available on any car.

The Audi Q5 is one of the most popular premium SUVs for sale today, and should be on your shortlist if you’re looking to buy or lease a classy family 4×4. The second generation arrived in 2016, with a facelifted model in 2020 bringing further styling and tech tweaks.

The 2.0-litre diesel will be a fine choice as a rapid family SUV. The 2.0-litre petrol isn’t bad, with plenty of power, but it’s not exactly cheap to run and feels a bit frantic for a big SUV like this; it’s worth going for one of the excellent plug-in hybrid models, if you can afford it.

With prices starting from around £46,000, the Audi Q5 is right in the mix of the premium SUV class. Its main rivals are the BMW X3, Jaguar F-Pace, Volvo XC60 and Mercedes GLC, while other cars worth considering include the Alfa Romeo Stelvio, Lexus NX and Land Rover Discovery Sport.

Where the Audi Q5 impresses is with its interior quality. Like all Audis, there’s a solidity and premium feel that puts it above its main rivals. And with all cars getting sat-nav, LED interior lighting, leather seats (heated up front), three-zone climate control and Audi’s MMI infotainment system, you’re not short of kit. However, higher-spec cars add even more equipment, and there’s still an extensive options list that can bump up prices further.

The standard car is offered with either a 261bhp 2.0-litre petrol engine, badged 45 TFSI quattro, or a 201bhp 2.0-litre diesel unit labelled 40 TDI quattro. Those with deeper pockets can opt for the Q5 TFSI e plug-in hybrid version which brings a power output of 295bhp (50 TFSI e), while the 362bhp 55 TFSI e car is no longer available on the Q5 price list. All cars utilise a seven-speed S tronic automatic gearbox.

The performance-orientated SQ5 uses a 3.0-litre diesel engine to produce 336bhp, with an eight-speed tiptronic transmission.

Overall, the Audi Q5 feels like a premium product, but despite the tweaks to this facelifted second-generation car, it doesn’t really stand out in any particular area to put it at the front of the hugely competitive premium SUV pack. 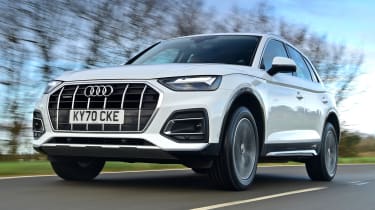 The first-generation Audi Q5 made its debut in 2008 and was the first mid-size SUV from the German brand, following in the wake of the larger, seven-seat Q7. Using the same underpinnings that would eventually be the basis for the Porsche Macan, the Q5 was car-like to drive with impressive refinement, comfort and practicality.

The original lasted nearly a decade in production, with only a minor facelift 2012. It was finally replaced by the Mk2 in 2016, which was slightly bigger but essentially followed the same winning formula.

The latest Q5 is larger and more luxurious than its predecessor, but it retains the original’s family-friendly approach and standard fit four-wheel drive. There’s an even wider range of engines on over, including a petrol-powered SQ5 and even a plug-in hybrid. It can’t quite match the class leaders for entertaining driving dynamics, but it’s more comfortable than before and  boasts enhanced refinement.

The original Q5 proved an instant hit for Audi by distilling all the desirability of its larger Q7 model into a smaller and more affordable package. Quattro four-wheel drive was standard across the range, while the interior mixed top-notch quality and plenty of practicality. There are a wide range of petrol and diesel engines to choose from, as well as a high-performance SQ5. This featured 3.0-litre V6 TDI and was the first Audi S model to feature a diesel engine. You can read our full Audi Q5 used buyer’s guide here.

For an alternative review of the Audi Q5, visit our sister site carbuyer.co.uk…