The sixth-generation Volkswagen Polo builds on the strengths of its predecessors. It’s more like a shrunken Golf than ever, and offers lots of space and tech when compared to its supermini rivals. Put simply, this is the quality option in the class, and nowadays it straddles the gap between regular superminis and premium models such as the MINI.

Buy a Polo and you’ll be getting into a small car that rides with a similar level of composure to a VW Golf, while the interior feels best in class for quality. It is an expensive small car though, and its chief adversary, the Ford Fiesta, is more fun to drive.

No matter which Volkswagen Polo you choose, from entry-level Life to the rapid GTI, you’re getting one of the classiest superminis for sale in the UK today. The sixth-generation arrived in 2018, and it brought with it a step up in quality over the old car, as well as a range of efficient engines and some of the latest tech from the larger Golf.

The Polo is now nearly as long as a Mk3 Golf, and it’s nearly as wide as the Mk5 version, which means the Polo is one of the roomiest cars in the supermini class. It’s a strong selling point in the face of a long list of rivals with their own talents. The Ford Fiesta is the choice for a fun drive, while the Citroen C3 adds personalisation and funky design to the mix. The Vauxhall Corsa and Skoda Fabia are solid, practical choices, while the SEAT Ibiza and Mazda 2 add a sporty edge.

But the rivals don’t stop there, because the Polo is a quality product, so it could also be considered a rival to premium superminis such as the MINI and Audi A1. Then there’s the rest of the supermini ranks, including the Hyundai i20, Toyota Yaris, Kia Rio and all-new versions of the Peugeot 208 and Renault Clio.

To help the Polo compete, VW has fitted it with its latest turbocharged engines. At the entry point to the range there’s a 79bhp, three-cylinder naturally aspirated unit, but we’d recommend going for the 1.0 TSI three-cylinder turbo petrol engine. It comes in 95PS and 110PS forms with power outputs of 94bhp and 109bhp. The sporty GTI model delivers 204bhp from its 2.0-litre TSI petrol unit.

All models are front-wheel drive, with the 79bhp and 94bhp engines coming with a five-speed manual as standard, although the 94bhp version can also be specified with a seven-speed DSG auto ‘box. The 109bhp variant is only available with the automatic transmission. Diesel-powered Polo versions are no longer available to order, although you may find some examples from stock in the dealer network.

Trim levels have been slimmed down to include Life, Style, R-Line and the standalone GTI model. All cars come with Apple CarPlay and Android Auto, 2 USB sockets, alloy wheels, all-round electric windows (all Polos are five-door now), and a multifunction steering wheel. The Polo range starts from around £19,000, with the Style and R-Line versions coming in at around £22,000, and the performance GTI priced at almost £28,000.

The history of the Volkswagen Polo dates back to 1975. Since then, it has grown from being a rebadged Audi into one of the best superminis you can buy. It’s not the cheapest supermini you can buy, but solid residuals mean you’ll lose less money when you sell it, while the latest versions feel like slightly smaller versions of the excellent Volkswagen Golf. 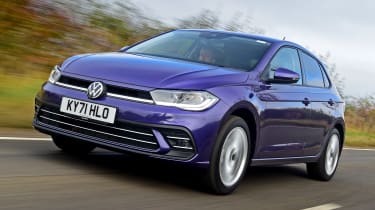 The current Polo is one of the classiest superminis you can buy. It’s like owning a smaller Golf, although this means that you’ll pay a premium for the privilege. A facelift in 2021 ushered in styling tweaks, while every Polo version features a standard digital instrument display.

Feeling every inch a ‘mini Golf’, the Mk4 Polo felt like a grown up supermini. Excellent ride quality, superb build quality and economical engines are just some of the highlights, although the Polo is let down by a mediocre driving experience. The 2005 facelift introduced Golf-style headlights and Phaeton-style rear lights. Read our full Mk4 Volkswagen Polo buyer’s guide here…

The Volkswagen Polo has come a long way since it arrived in 1975 as a rebadged version of the Audi 50. The Mk1 Polo lived on until 1981 when it was replaced by the Mk2, which included a now iconic ‘breadvan’ version. Things stepped up a gear in 1994 with the launch of the Polo Mk3, which was based on a new platform and came complete with new body and engines.

For an alternative review of the Volkswagen Polo, visit our sister site carbuyer.co.uk…