If you can afford to buy and run a 911 and it fits into your life, there’s no reason not to buy one. The biggest problem will be to work out which model best suits your needs. Here you need to engage with other owners in forums and pin down the pros and cons of each engine, transmission and bodystyle, plus some key options, although there’s constant disagreement over which is best. Buy a 911 with the right spec for your needs and you’ll love it, whether you’re buying to use it regularly, sparingly, or even as an investment.

The Porsche 911 celebrates its 60th birthday next year, and since the original model arrived, the car has been beguiling automotive enthusiasts with its sound, performance, usability, reliability and engaging driving experience.

Over the years since 1963, the appeal of these rear-engined sports cars has never diminished. In fact, the 911 is as popular as ever. Here we’re covering the seventh-generation model (codenamed 991), with a focus on the more mainstream versions, such as the Carrera, Targa and Turbo.

The 991.1 version of the 911 coupé arrived in December 2011, in 345bhp 3.4 Carrera and 394bhp 3.8 Carrera S forms; within weeks these were also offered in cabriolet guise. By December 2012 the coupé and cabriolet were available in 4WD Carrera 4 and Carrera 4S forms. Three months later the 513bhp 3.8 Turbo and 552bhp Turbo S coupés arrived, soon followed by cabriolet versions.

A revised 911 (the 991.2) went on sale in December 2015, and all models, apart from the GT3, were powered by twin-turbo 3.0-litre engines; the Carrera now had 365bhp and the Carrera S 414bhp. From January 2017 there were 444bhp GTS versions of the coupé, cabriolet and Targa. The former two came in rear or four-wheel-drive forms, while the Targa was 4WD only. The eighth-generation 911 arrived in November 2018.

The ultra-costly GT3 models are too specialist for us to consider here. All regular 911s are fast, usable and comfortable, so it’s up to you to decide which engine, transmission and bodystyle you want.

Equipment levels aren’t that generous, but all 911s came with bi-xenon headlights, dual-zone climate control, leather trim and sports seats. Cruise control (standard or adaptive) was optional, as were keyless go, a multifunction steering wheel, voice control and rear parking sensors; the latter was standard on Targa and cabriolet models.

Other extra-cost options worth looking out for on any potential purchase include heated seats, a sunroof, a rear wiper, front parking sensors, electric seat adjustment and an upgraded (Bose or Burmester) hi-fi.

On paper the 911 has a few rivals, but in reality it’s unique. You might consider the BMW i8, which impresses with its futuristic design and hi-tech hybrid tech, as does the Honda NSX. Other mid-engined supercars that offer driving thrills, dramatic styling and sensational performance include the McLaren 570S, Lamborghini Huracán and Audi R8. All are easier to live with than you might expect, but they’re strict two-seaters.

The Jaguar F-Type might seem rather tame compared with the 911, but it’s ferociously fast, as are the Aston Martin V8 Vantage and Mercedes-AMG GT. Like the Porsche, all of these come in coupé and convertible forms, apart from the Honda NSX. 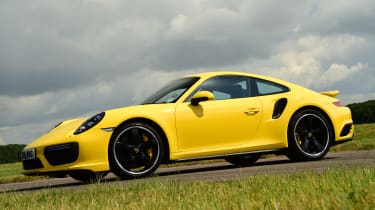 There’s a coil pack for each cylinder, and a failure can make the engine misfire. A failing crankshaft sensor can cause the same problem.

The 991 had a good seven-speed manual gearbox as standard. The dual-clutch PDK is more popular, but it tends to be less reliable.

Air-con drain pipes can come adrift on pre-facelift cars, leading to a coolant leak in the footwell. If left unchecked, it’ll get into the electronics.

A total of seven recalls over a model’s lifetime isn’t bad. A small number of owners have reported issues with the 991’s electrics, engine, gearbox, brakes and suspension, but generally the consensus is that this is a reliable car.

The 911 isn’t generously equipped as standard, but it is luxurious with its premium materials and superb build quality. The ergonomics are excellent, too, and the front seats are supremely comfortable. The back seats are for small children only, but they provide useful luggage space when unoccupied.

You’ll probably need it because the 911’s boot can stow just 145 litres – or 125 litres in four-wheel-drive models. If you need more capacity, Porsche offered a ‘roof transport system’ (roof box) with a 75kg limit. A touchscreen infotainment system is standard on the 991 and despite the age of the car, it’s still relatively intuitive and easy to read.

All 991s need servicing every two years, and for most editions there’s a 20,000-mile limit between services. However, the GT3 cuts this to 12,000 miles. That’s generous for a supercar, but every service is a major and it’s pegged at £1,530, including a set of new spark plugs.

This cost also includes fresh brake fluid and an air-con service; the former is required every two years, whereas the latter is merely recommended. On its own, an air-con service costs £159; a brake fluid change is £160. If you’re not keen on doing 20,000 miles between oil changes, Porsche dealers will do one for you on its own, priced at £471. Because all Porsche engines are chain-driven, there are no cambelts to replace.

Porsche has recalled the 991 seven times, and the first came in 2014 because the bonnet catch could fail, allowing the panel to open while the car was being driven. Incorrectly assembled brake servo pipes led to a recall in October 2016, then there were four campaigns in 2017, the first in January due to faulty side airbag detonators.

There was one in February because of fuel pipes working loose, leading to petrol leaks, and then there were two campaigns in March. The first was because the bonded-in windscreens fitted to Targa and Cabriolet models could work loose (the solution was to rebond the windscreen); the second recall that month was because of faulty detonators once again, but this time it related to those fitted to the front passenger airbags.

The 911 doesn’t appear in any of our Driver Power surveys because it doesn’t sell in big enough quantities. However, Porsche finished top of our annual Brands survey in 2021, winning six of the 10 categories. Scan online forums and you’ll find a consistent message: Porsche owners think their cars are easy to live with, great to own and generally reliable. Although very costly problems can crop up, they’re unusual.