If ever you needed proof that car makers can reinvent themselves, the Peugeot 5008 is it. The first generation was okay at several things, but it disappointed in several areas too, most notably its build quality and reliability – long-time Peugeot problems. The 5008 Mk2 comprehensively shook things up with one of the best cabins in the segment in terms of its comfort and usability, plus fit and finish. However, while we’re big fans of the 5008, it was beaten by the SEAT Tarraco and Skoda Kodiaq (in that order) in a group test in 2018. On the other hand, we admitted at the time that a different-spec car might have been higher up the rankings, proving how important it is that you buy the right 5008 for your needs.

Peugeot built its first car in 1889, and for most of the time since then its focus has been on producing affordable, family-friendly vehicles. It was among the first to offer estate cars, hatchbacks, MPVs and SUVs, and although its first attempts at the latter weren’t especially convincing, when the firm decided to turn its 2008, 3008 and 5008 into proper crossovers (the original 3008 and 5008 were more like MPVs), they were far more desirable and much more popular as a result.

We ran a 5008 on our fleet in 2018 and were impressed with its supportive seats, comfortable ride, cavernous interior, user-friendly (and great-sounding) infotainment system, plus its engaging handling. We also loved the quality, and the design inside and out, so could this be the perfect used SUV?

By the end of 2017 there was a 1.5 BlueHDi 130 option, which initially sold alongside the 1.6 BlueHDi engines, but by the end of 2018 the bigger powerplant was dropped. A new range-topping GT Line Premium trim was introduced in February 2018, then in November 2020 a facelifted 5008 arrived with a sharp new look, fresh exterior colour options, extra driver-assistance systems and a digital instrument display now standard across the range.

The diesels offer muscle and economy; the top 2.0 BlueHDi 180 is really strong, but the smaller units are fine too. The 1.2-litre petrol engine is fairly powerful, and while the 1.6 THP has much more urge, it’s quite thirsty.

Arguably the closest rival to the 5008 is Peugeot’s own 3008, which offers the same attributes, but in a smaller, five-seat package. If seven seats aren’t essential, the 3008 is well worth a look. If you do need all those seats, the Skoda Kodiaq, VW Tiguan Allspace and SEAT Tarraco should fit the bill thanks to their roomy and practical interiors, efficient engines and decent dynamics.

Another impressive seven-seat SUV is the Kia Sorento, which is good value, well equipped and very reliable, backed up by a seven-year warranty. Related to the Sorento is Hyundai’s Santa Fe, which also impresses, although its cabin isn’t quite as nice and there’s only a five-year warranty. In this company the old Nissan X-Trail is dated; you get a spacious cabin and a stylish design, but some versions have only five seats.

All 5008s with a 2.0 BlueHDi engine have a tyre repair kit in the boot, but every other model gets a space saver spare wheel. 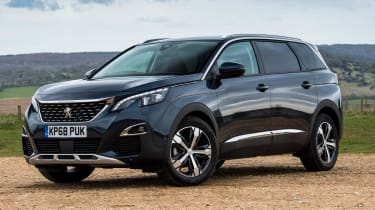 Some owners say keeping the stop/start on can kill 12-volt batteries, and unless the battery is in top condition, the system won’t work properly.

If you’re worried about taking your 5008 into clean air zones, you shouldn’t be, because every diesel engine in the range is Euro 6-compliant.

There have been quite a few recalls, for a variety of issues, but the core reliability of a well maintained 5008 should be good. We hear of electrical faults, so check functions like the tailgate release, door locks and infotainment system.

If you want a dashboard that’s different, the 5008 should fit the bill with its imaginative design, small-diameter steering wheel, high-quality materials and user-friendly ergonomics. All 5008s come with seven seats, and cabin space is good, but the third row is best for kids; and headroom is tight in the middle row if the car has a panoramic sunroof.

Carrying capacity is excellent, too; fold the second and third rows flat and you have 2,150 litres at your disposal. That drops to 780 litres with the middle row in use, or 167 litres with the rearmost row also upright.

Peugeot has recalled the Mk2 5008 a dozen times so far, the first in October 2017 because of chafing starter motor wiring. Faulty parts that could lead to engine failure led to a recall in December 2017 and two months later there was another campaign, due to potential fuel leaks. There were two recalls in July 2018, one because faulty software could lead to overheating and engine failure, the other because of oil leaks.

Wheels working loose led to a recall in November 2018, then there were three campaigns in 2019. These were due to the wiring loom, diesel particulate filters and poorly secured spare wheels. There were three further recalls in 2020, thanks to poorly secured tow bars, sub-standard software leading to the urea injector getting blocked, and faulty diesel particulate filters.

Although the 5008 has never appeared in our surveys, the very similar 3008 finished in first place in our 2018 new-car poll, before dropping to seventh the following year, then jumping back up to second in 2020. Just as encouragingly, Peugeot notched up an 11th place (out of 30 entries) in our 2021 Brands survey, beating Volkswagen, Nissan and SEAT, as well as Mercedes, Audi and BMW.