Skoda clearly hasn’t lost sight of what has made its Fabia supermini so successful after more than 20 years in production. Improved practicality, more space for passengers and modern, up-to-date tech mean that the Czech manufacturer has enhanced what was already a pretty compelling overall package.

Throw in the Fabia’s sharper styling, reassuring levels of safety kit and some keen pricing, which undercuts its SEAT Ibiza and Volkswagen Polo siblings, and buyers might find it hard to resist the appeal of Skoda’s latest supermini.

It’s fair to say that today’s superminis are not the compact runabouts they once were. Always a popular choice for its mix of affordability, practicality and ease of use, the humble supermini has faced a new era of safety regulation, combined with buyers demanding improved quality, extra space and greater comfort. All of which has led to more sizable models being designed and brought to market.

In fact, the breadth of skills on offer from established supermini rivals such as the Ford Fiesta, Renault Clio and Vauxhall Corsa mean that the gap between this segment and traditional family hatchbacks such as the Ford Focus and VW Golf is closer than ever. With extra competition from its SEAT Ibiza and Volkswagen Polo stablemates, and the likes of the Hyundai i20, Mazda 2, Peugeot 208 and Toyota Yaris offering strong appeal, Skoda’s fourth-generation Fabia certainly has its work cut out.

Lucky then, that the five-door Czech supermini benefits from using the same MQB-A0 platform as its Polo and Ibiza cousins. This architecture also underpins Skoda’s Scala family car and Kamiq small SUV, and its lightness helps to keep the Fabia’s weight roughly the same as its predecessor’s. A feat all the more impressive when you consider the new car is 111mm longer and almost 48mm wider. 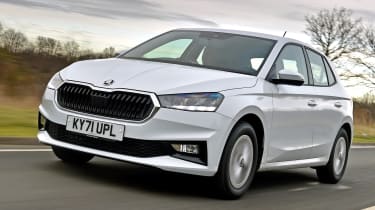 Under the skin, Skoda has kept things pretty simple with a 1.0-litre MPI petrol engine available with either 64bhp or 79bhp, or a 1.0-litre TSI turbocharged unit offering more punch with a choice of 94bhp or 108bhp. A 148bhp 1.5-litre TSI petrol sits at the top of the range.

All Fabias use a five-speed manual gearbox, with the exception of the most powerful 108bhp model, which has a six-speed manual as standard and the option of a DSG automatic transmission, while the 148bhp model only comes with the DSG auto.

Standard kit across the Fabia range is pretty generous, with the entry-level S version including LED headlights, air-con, Bluetooth, a DAB radio and safety tech you’d perhaps expect to see on more expensive models. However, this trim is only available in combination with the 64bhp MPI engine. SE Comfort, SE L, Colour Edition and Monte Carlo trim levels complete the available specifications.

The Fabia S model is priced at around £16,000, which means it’s cheaper to buy than many of its close rivals, while most mid/top-spec cars still come in at less than £20,000. The sweet spot in the range is arguably the 108bhp six-speed manual version paired with either the SE Comfort or SE L trim, depending on whether you feel you need the extra tech features that come with the SE L, such as integrated sat-nav, cruise control and a bigger infotainment touchscreen.

For an alternative review of the Skoda Fabia, visit our sister site carbuyer.co.uk…