The Nissan Leaf impresses in pretty much every area. It’s easy to drive and comfortable, especially around town, and it has a decent range that should make it appealing to a wide range of buyers. Given how much it costs, there’s an impressive amount of tech on offer, too, and it has enough space for all the family.

There’s a chance that people who already own one of the first-generation Leafs will be unhappy to see just how ‘normal’ this model makes owning, driving and living with an electric car – in its looks, interior, interface and the way it drives. However, for us, our only real disappointment is that, from a quality and style point of view, it’s still not as appealing as the VW ID.3.

If you want a sense of the speed things are changing in the world of electric cars, the second-generation Nissan Leaf is a great place to start. It arrived in 2018 offering new levels of practicality, user-friendliness and – above all – the ability to travel significantly further on a single charge of its battery pack than most rivals could manage. As a result, it went straight to the top of an admittedly limited class of all-electric family hatchback options.

Back then, we put the Leaf up against key rivals the BMW i3, Renault Zoe and VW e-Golf, and none could muster a winning hand against the new Nissan. Today, the landscape has changed significantly, and the Leaf has to contend with a gaggle of impressive electric challengers – mostly in the form of SUVs. In various back-to-back tests we’ve conducted the Leaf has lost out – albeit narrowly – to the MG ZS EV, Kia e-Niro and Hyundai Kona Electric. All offer similar – or greater – range, performance and efficiency, but with more space and comfort, more impressive infotainment systems and typically for a bit less money.

Closer to home, the new VW ID.3 hatchback ramps the pressure up a notch by bringing a new level of sophistication and perceived build quality, but the Leaf still stands out as a great all-rounder. Like the roster of rivals above, the Leaf is an electric model that you can seriously consider as an only car.

Under the latest WLTP tests, Nissan quotes a range of 168 miles for the standard Leaf, and you can actually expect to see a range of around 160 miles in everyday use, in the summer at least: cold weather seriously limits EV range, and you might be lucky to get around 100 miles from a full charge when it’s really chilly.

If you want to go even further, there’s the Nissan Leaf e+, with the ‘+’ part of the name signifying that this version has a bigger battery, which gives it a WLTP range of 239 miles. It also has more power, with 214bhp compared to the standard car’s 148bhp.

Charging a Leaf via a 7kW wallbox home charger will take 7.5 hours for the standard car, while the Leaf e+ takes 11 hours. A 50kW fast charger will get the standard car’s battery from 20 to 80 per cent charge in an hour. If you keep the battery topped up every time you park (much like you would with a smartphone) then range anxiety shouldn’t be an issue the vast majority of the time. 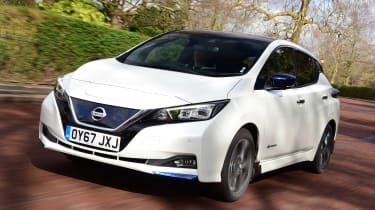 That will leave you to get on and enjoy the Nissan Leaf and how it drives. It’s quiet, refined and comfortable around town – although the suspension is a little on the firm side to help it cope with the weight of the batteries – while the assorted driving aids are very useful.

The main highlight is Nissan’s e-Pedal system. This boosts the resistance from the electric motor and allows you to drive just using the accelerator, without the need to press the brake unless in an emergency. Once you get the hang of it, it’s possible to boost your electric driving range by being as smooth as possible with the e-Pedal system.

If you’re still not quite sold on the idea of an all-electric car, then other rivals to consider include the Hyundai Ioniq which comes both as an all-electric car, or a plug-in hybrid. The plug-in option opens up a variety of other interesting choices too, including the Toyota Prius, Kia Niro and Ford Kuga PHEVs.

While the Nissan Leaf was an electric pioneer, it now has a fast-growing number of rivals that come in a variety of guises. The main opposition will no doubt be the popular VW ID.3, while the Renault Zoe is a supermini-sized option. Hyundai now offers the Kona Electric SUV, which has more usable range, as does the Kia e-Niro, and the BMW i3 is a premium alternative that trades on its unique design and advanced tech.

If you’re thinking of buying a Nissan Leaf, why not visit our sister site buyacar.co.uk for the latest deals…