The Taigo is a solid addition to the Volkswagen SUV line-up. It offers similar driving dynamics to the T-Cross with a dose more style, yet practicality isn’t compromised. You’ll pay a chunk more than for a T-Cross as a result, but then, we could see why some might do this. Otherwise, the Taigo is well equipped, comfortable, efficient enough and generally pleasant to spend time in, apart from a few cheap materials.

Style sells, which is why Volkswagen has concentrated its efforts on SUVs in recent years. It sells no fewer than five models now the Taigo has joined the line-up, with this new car offering an even more style-focused approach in the compact SUV class.

The Taigo shares its mechanical make-up with the T-Cross crossover, so is based on the MQB A0 architecture that underpins cars such as the Polo supermini. We’re testing it in what will be big-selling 1.0 TSI 110 guise, with a seven-speed dual-clutch automatic gearbox and in high-spec Style trim.

Priced from £28,255 in this specification, it’s the slightly less sporty route compared with the R-Line model that’s available alongside it; both sit above the entry-level Life trim level and come well equipped.

Volkswagen’s 1.0-litre three-cylinder TSI turbocharged petrol engine pushes out 108bhp and 200Nm of torque, which in a car weighing 1,260kg is more than adequate for the type of driving most Taigo owners will undertake.

It’s helped by the DSG gearbox, which shifts swiftly and smoothly enough; with an extra ratio compared with the manual, the intermediate gears feel shorter, too, helping performance without hurting refinement.

The 0-62mph sprint takes 10.9 seconds, which doesn’t sound all that fast, but there’s enough oomph for pretty much every situation. Rarely will you find the Taigo feeling all that breathless or lacking in grunt during everyday driving.

Under heavy acceleration the engine note is noticeable. But otherwise, in normal conditions cruising around relatively gently, the noise melts away into the background as a dull and distant thrum. 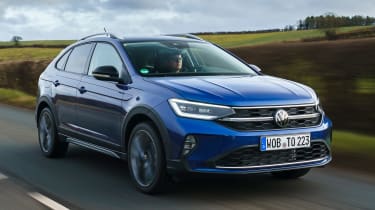 This is where the Taigo is best, cruising at a leisurely pace. While the steering is the right weight for this car but surprisingly light, it means sometimes in quicker corners there’s a little more body roll than you might expect, but it’s more than competent enough and this focus on comfort and ride quality is welcome.

Only occasionally does it seem really unsettled. Otherwise, it doesn’t feel too flustered and filters out the worst of what the road surface can test the suspension with. Sometimes you feel the wheels bobbling around beneath you, but rarely does this really unsettled the body.

Inside, the Taigo is familiar in the front at least, sharing its design with the T-Cross. That means softer plastics where they are more visible, but some harder materials lower down. A 10.25-inch digital dash is standard and is joined by a snappy central touchscreen featuring wireless Apple CarPlay and Android Auto connectivity.

Wireless phone charging is also standard, along with built-in sat-nav, dual-zone climate control, auto high- beam matrix LED headlights, and a host of driver-assistance tech, including adaptive cruise control with lane assist, traffic-sign recognition and autonomous emergency braking. This is why we think you don’t need anything more than Style trim, unless you’re desperate for the mildly sportier-looking R-Line model, but you’ll pay an extra £900 for the privilege.

In the rear the sloping roofline doesn’t adversely affect headroom, while there’s enough legroom for most. The 440-litre boot is adequate, too, offering enough space for an SUV of this size. The large tailgate reveals a flat load floor to the rear bumper, so it’s also easy to load up.

And of course, returning to the point of style, by manipulating the T-Cross’s roofline, lowering and elongating the car’s profile for the Taigo, VW has created a coupé-SUV look that not so long ago you’d have had to pay at least twice as much as this for. The full-width light bar across the tailgate and black styling add-ons for the mirrors create some contrast and a sleek look.

Despite this more premium appearance, the 1.0 TSI unit is quite frugal, so while the Taigo might appear rather more exclusive than the T-Cross, it shouldn’t cost much more to run, with claimed figures of 47.9mpg and 134g/km of CO2 emissions. We got fairly close to Volkswagen’s official numbers on our test, too, without any attempt at particularly eco-conscious driving.

The Taigo broadens buyers’ choices when it comes to a small SUV, which is a good thing when combined with a solid dynamic experience, strong tech and enough space. Consumers have never had it so good.