There’s no obvious platform for Jeep to use to build a production electric Wrangler, but it will have to come at some point. And the Magneto 2.0 shows how off-road prowess might just drag the purists along with it.

The man in charge of designing Jeeps, Mark Allen, describes his work on the electric version of the Wrangler as his biggest challenge. Last year, the iconic US brand unveiled the Magneto concept, and now it has launched the Magneto 2.0, which brings tweaks on the outside and significant gains under the skin. Plus, it’s drivable.

It’s also enormous, with the steering wheel at eye level as you approach it, although the Magneto 2.0 is reassuringly familiar once you climb aboard. The instruments, air-conditioning controls, the toggle lever for locking the differentials, the stubby, low-ratio gearbox selector and the longer one for the six-speed transmission are all present, just as they would be in a combustion- engined Wrangler. And yes, that means the Magneto 2.0 is an EV featuring a six-speed manual transmission with clutch.

Effectively the concept is a stretched two-door Wrangler, with the extra space making room for four lithium-ion battery packs, as well as improving rear passenger kneeroom. Battery capacity is 70kWh, but current range is only 200km (124 miles), in deference to the electric motor’s enormous 625bhp. 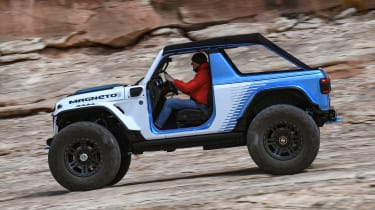 There’s a slight whine from the drive system at start-up, but as soon as we move off, the crunching of the huge tyres on gravel sets the tone. Oddly, driving electrically feels the same in every gear; only the level of energy recuperation varies.

Even so, acceleration is powerful in any gear, thanks to peak torque of 1,152Nm. The maximum current of the drive system can reach 600 amps for up to 10 seconds, and Jeep promises the car can crack 0-62mph on asphalt in two seconds.

We dive into the rock formations that give Utah’s Canyonlands its name. The “Rock Track” low-ratio gearbox kicks in and the front and rear differentials lock. Now we cautiously work our way forward with a ratio of 3.36 in first gear. The enormous ground clearance and electronically controlled traction-management system help the Jeep to climb seemingly impassable rocks.

There’s no loud increase in engine speed under high load. Only the rubbing of the tyres on smooth rock and the tensioning of the car’s springs and dampers punctuate the automotive scramble. During this, you can modulate the power with just slight movements of the right foot, only rarely needing to switch to the brake pedal. Downhill speed is mainly governed by recuperation – proof that a “one-pedal” technique off paved roads leads to a new quality of off-road driving.