Much like the Thunder that preceded it, the Ford Ranger Stormtrak offers more kit and a different look for a modest extra outlay when compared with the Wildtrak that it’s based on. It retains that truck’s one-tonne payload, too, so unlike the sportier Ranger Raptor, it still qualifies as a commercial vehicle. It’s sure to help the Ranger keep its number one spot in the sales chart until the all-new model arrives in the new year.

While the all-new Ford Ranger has been revealed, we’re still a little way off from its arrival in dealerships. The new high-performance Ranger Raptor with V6 turbo petrol power is expected to arrive in the autumn, but we’ll have to wait until the start of 2023 for the commercial versions to hit dealerships. In the meantime, Ford is keeping the current truck fresh with special editions.

The latest to arrive is the Ranger Stormtrak, and if it looks familiar to you, that’s because it follows a template created around 12 months ago by the Ranger Thunder. Ford has taken the top-spec of the standard Ranger line-up, the Wildtrak, and given it a few upgrades to help it stand out. Chief among these are the red ‘nostrils’ added to the blacked-out grille, while gloss black 18-inch alloy wheels are fitted and there’s an Ebony black finish for the door mirror housings, door handles, front wing vents, rear bumper, skid plates and roll hoop in the load bed.

Matt-black stripes have also been added to the bonnet, while the biggest difference between the Thunder and Stormtrak is the colours that are available. The Stormtrak comes in Frozen White as standard, or there are metallic options in the form of vivid Blue Lightening [sic] for £600, or our car’s Rapid Red for £720. Big, red Stormtrak logos on the doors and tailgate finish off the look.

Inside, the Stormtrak is largely similar to the Thunder, and therefore the Wildtrak, with the addition of part-leather seats with Stormtrak branding, while red stitching is used everywhere from the seats and steering wheel to the dashtop. Illuminated kick plates with red Ranger lettering are also included. 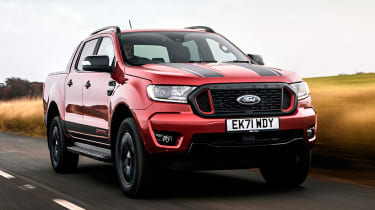 All of this comes on top of the already-generous spec list seen on the Ranger Wildtrak, with heated front seats, two-zone climate control, a Quickclear heated windscreen, auto lights and wipers, front and rear parking sensors and a reversing camera all included.

Our car featured some neat extras, too. The Driver Assistance Pack costs £1,380 and includes adaptive cruise, auto main beam and self-parking, while the £480 Trailer Tow pack adds a ball hitch and electrical supply. One extra we’d definitely recommend is the £120 Cargo Management System, which adds four double-ended hooks on either side of the cargo area, which are ideal for lashing items down to prevent them sliding around.

Any downsides? Well, unlike some rivals, the Ranger’s tailgate is undamped, so it opens with a slam if you let it go as it opens, while the truck’s driving position isn’t the most widely adjustable these days. The high floor and low seat mean you can feel a little cramped behind the wheel, while the steering wheel only adjusts for rake, not reach, although we’d hardly call it uncomfortable.

Like the Ranger Wildtrak, the Stormtrak only comes with the higher-power 210bhp 2.0 EcoBlue twin-turbodiesel, which is now sold exclusively with a 10-speed automatic gearbox. There’s no issue with the truck’s performance with this set-up, although there is a bit of a slow response from a standstill. Once you’re on the move, the engine and gearbox are quick to react, and with so many ratios to choose from, the Ranger is hardly ever outside of its power band. There’s a maximum of 500Nm of torque on offer, and the Ranger has plenty of pulling power for you to make the most of its 3.5-tonne maximum towing limit.

Comfort is pretty good, too. Don’t expect SUV levels of refinement, because the Ranger’s rear suspension is still designed to cope with a one-tonne payload, but this truck is more than capable of cruising smoothly at most speeds. Big potholes and bumps will get the truck bouncing and shuddering, but the Ranger is still the best new truck for sale when it comes to passenger comfort.

The sacrifices will be worth making for business users in need of a work vehicle that can double as family transport, though. While the Ranger Stormtrak’s price tag of £44,591 will be steep for private buyers, the tax savings it offers as a light commercial vehicle when compared with a similarly-priced diesel SUV that’s used as a company car will be worthwhile.