The Fiat E-Scudo is an impressive electric van that’s just as capable on the motorway as it is in the city. It’s comfortable, efficient and offers the same amount of cargo space as its diesel counterpart. But, the same is true for the mechanically identical models from Vauxhall, Peugeot, Citroen and Toyota.

The Fiat Scudo is back. After a brief hiatus for the nameplate, the Italian marque has applied it to a new, medium-sized van. The commercial vehicle is, of course, offered with the traditional plethora of diesel power plants. But, those are joined by a fully electric version: the Fiat E-Scudo.

It uses the same running gear as its electric Stellantis group stablemates the Citroen E-Dispatch, the Peugeot e-Expert and the Vauxhall Vivaro-e, as well as the Toyota Proace Electric. That means under the bonnet is a 134bhp electric motor powering the front wheels, fed by a battery located under the cargo floor.

Equipped with the 50kWh battery, the E-Scudo will cover up to 141 miles on a charge and starts from just under £36,000 (excluding VAT). Upgrading to the larger 75kWh battery unit does add around £4,000 to the price tag, but this also increases the range to 202 miles in standard-wheelbase form. Thankfully, the E-Scudo is eligible for the government’s Plug-In Van Grant, which helps reduce the price gap between it and the diesel versions.

The E-Scudo also gets the same rapid-charging speed of 100kW as its mechanically identical Stellantis siblings. A 0-80% charge for the 50kWh E-Scudo will take 32 minutes, while the larger 75kWh battery requires 45 minutes for the same top up. If you use a 7.4kW wallbox to recharge at home or work, it’ll take over seven hours to fully replenish the 50kWh battery and more than 11 hours to do the same for the 75kWh unit. You can increase the E-Scudo’s AC charging capability to 11kW if you need to cut those times down, but you will of course need access to a suitably faster AC charging-point.

There are just two trim levels for the E-Scudo: Tecnico and Business. The former gets you a laminated acoustic windscreen, full steel bulkhead, storage space under the front bench, twin sliding doors and 16-inch alloy wheels. Upgrading to Business spec adds a seven-inch infotainment screen with Apple CarPlay and Android Auto connectivity, body colour bumpers, rear parking sensors, a leather multifunction steering wheel and safety kit like road sign recognition and blind spot assist. The Lounge trim model we drove is the European equivalent of Business spec in the UK.

There’s no variation in roof height for the E-Scudo, which stands at nearly 1.9 metres tall, but you do get a choice of standard and long-wheelbase bodies and load capacity is unaffected by the electric componentry in the back. Cargo volume stands at 5.3 cubic metres for the SWB model, and 6.1 for the LWB version.

Both the ICE and BEV Scudos also come as standard with a load-through bulkhead for carrying longer items like pipes or wood planks if you don’t have any passengers with you. Plus, there’s some extra storage space under the front bench seat and the central seat can flip down to be used as a table when you need to work from your laptop or tablet. On top of the twin sliding doors, the barn-style rear doors can open up to 180 degrees. 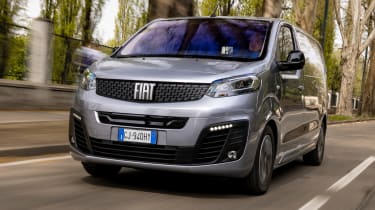 The E-Scudo has maximum payloads of 1,002kg to 1,226kg, depending on the wheelbase and trim you pick, and a one-tonne maximum towing capacity across the range. Both figures fare down on those of the equivalent diesel options.

The fact this is a rebadged version of the Vauxhall Vivaro-e, and all the others, is plain to see from the exterior and in the cabin. Behind the wheel is the same set of analogue dials, featuring an energy gauge in place of a rev counter, paired with a central seven-inch infotainment touchscreen in the top-spec model we tested. Fiat now fits a fully digital driver’s display and a central touchscreen measuring up to 10 inches to its larger Ducato van and the E-Scudo feels a little behind the times in comparison.

But otherwise, the large physical climate controls and other buttons were easy to use on the move and the cabin generally does feel like it’ll be able to withstand pretty much anything you throw at it. Plus, cabin space overall is decent, with the only real gripe being the pod for gear and drive mode selectors eating into the middle passenger’s legroom – a common issue in the mid-size panel van class.

Our first drive in the E-Scudo took place around Turin, Italy, with 300kg of cargo in the back. We spent the majority of our time on the motorway where the zero-emissions panel van felt refined and comfortable. The car-like driving position certainly helped with the latter, as did the adjustable driver’s seat and steering wheel. Although, without the radio on we did notice the high-pitched whine from the electric motor quite frequently.

The motor does at least provide plenty of power for getting up to the 80mph top speed with ease, even in Normal mode. Eco mode dulls the throttle response and limits power output to the point where you end up pressing the throttle harder to get up to normal speeds, which doesn’t help extend the van’s range by any means. Power mode meanwhile gives you the full 134bhp on tap, but can be reserved for when the E-Scudo is fully loaded up.

We also kept the E-Scudo in its ‘B’ mode for strong regenerative braking for most of our drive, which was excellent around town in the stop start Turin traffic, and meant we only saw a minimal loss of range when covering miles in the city. You do have to use the regular brakes to come to a complete halt as the regen isn’t quite strong enough for one-pedal driving, but the transition between the two is very smooth at least.

Visibility in the E-Scudo is great as well, and the steering is light enough for easy manoeuvring in tight spaces and car parks. Thankfully, it stops short of feeling so light that the E-Scudo becomes difficult to place accurately at high speeds.